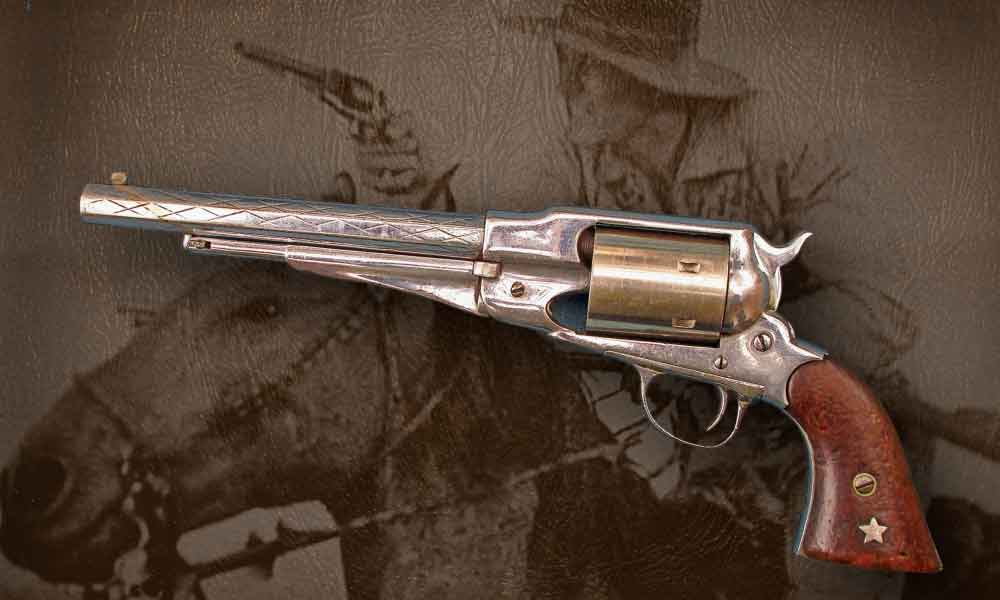 Although John Wayne is undeniably best known for Western films in which
he packed an 1873 Colt Peacemaker and dispensed frontier justice with the famed hoglegs in one horse opera after another, his first silver screen six-gun—as well as his last use of smoke wagons—were not Colts at all.

In his last film, 1976’s The Shootist, Big Duke packs the pair of ivory-stocked, blued and ornately engraved Great Western Arms Company clones of the ’73 Colt Peacemakers that he’d been given years earlier and was waiting for just the right film to use them in. Big John felt these fancy six-shooters perfectly suited the film’s professional gunman character, J.B. Books.

While a fair amount of coverage has been given Wayne’s last movie six-guns, little if anything has been written about his first big screen sidearm. Regardless of the
Old West era depicted, the Duke constantly relied on the metallic cartridge 1873 Colt Single Action Army revolver. Examples include The Comancheros (1961), set in 1843, and The Searchers (1956), which takes place in 1870. However, for his portrayal of a frontier scout in the 1930 epic motion picture The Big Trail, which marked Wayne’s debut as a leading man, the 23-year-old Duke packed a nickel-plated, cartridge conversion, New Model 1861 Remington Army revolver, which is often mistakenly dubbed an “1858 Remington,” even though there is no such model.

From the collection of Al Frisch’s Hollywood Guns & Props, Duke’s Big Trail Remington has been on display at the National Rifle Association’s National Firearms Museum in Fairfax, Virginia. It bears serial number 90801 under the
barrel, in the proper location, with that number again in studio-type stamping on the flat of the butt strap. It also has a Stembridge Gun Rentals serif  “S” stamping. For expediency in valuable production
time, filmmakers employ duplicates of major prop firearms, such as those used
by primary actors, in the event of having to reload due to malfunction or for extra
takes of a scene. Its mate, serial number 17901, was sold to a private party at the 2007 High Noon Auction.

While there are no records of firearms rentals for The Big Trail, both revolvers can be identified while watching a 70mm version of the film. In fact, Frisch had owned both Remingtons for several years before he identified them while watching a 70mm copy of the movie. Recognizable features of Wayne’s now famous first six-shooter include a somewhat crudely cut diamond pattern file work design on each side of the octagonal eight-inch barrel.
A similar motif has been cut into the firearm’s back strap and, like its mate, has been studio-altered to fire .38 centerfire blanks instead of the Remington factory’s .46 Rimfire rounds. The stocks have had small metal Texas stars inset into each side of the two-piece walnut panels.

In addition to its role in Wayne’s The Big Trail, this distinctive six-shooter, as part of the Stembridge Gun Rentals arsenal, was reportedly also carried by cowboy star William S. Hart in an early oater, and again decades later by actor Lorne Greene in the first season of TV’s Bonanza. This ’61 Remington is noteworthy in that it reveals that despite the
venerable 1873 Colt Peacemaker so closely linked to John Wayne’s Western film, his celluloid taming of the West began—and ended with—six-shooters produced by companies other than Colt.