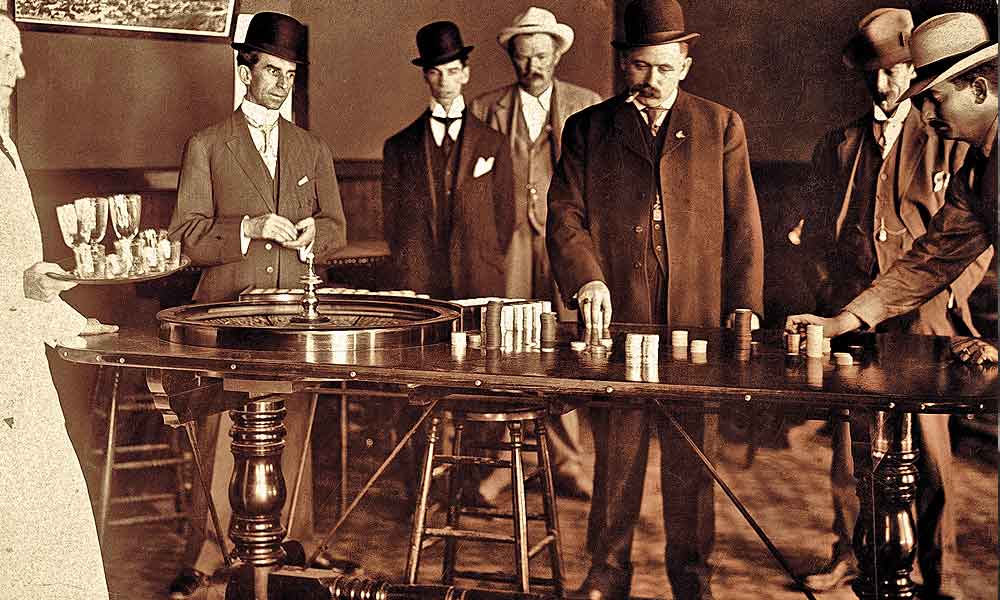 California was bursting at the seams with fortune seekers in 1885, when 23-year-old Charles Fey landed in San Francisco. Gaming was made illegal in California that year, but that ban would not deter the immigrant from Bavaria, Germany.

At that time, games of chance did not have a direct payout mechanism. If a patron inserted a nickel and won a royal flush, the establishment might pay him out in drinks or cigars. In 1895, Fey automated the process through his three-reel slot machine, popularly known as the one-armed bandit, in which the gambler pulled a handle to spin the reels and, upon winning, would be paid out by a stream of nickels pouring out into a tray below.

Inspired by the success of his first machine, Fey improved it, patriotically naming his invention the Liberty Bell, after one of the images featured on his spinning reels, which also showed horseshoes, diamonds, spades and hearts.

The popularity of Fey’s machines in saloons urged others to step into the gaming market, including Herbert Mills of Chicago, Illinois. Some makers, to get around the gambling ban, created trade stimulators that gave out winnings in the form of chewing gum or cigars. Photographs of some of our nation’s last frontier saloons showcase these gaming devices and are lavishly featured in Roger Kislingbury’s latest book, American Saloons: Pre-Prohibition Photographs.

Despite Mills stealing Fey’s Liberty Bell machine outright, Fey found success
by focusing on the San Francisco market. He even invented a detecting pin to distinguish fake nickels from real ones to deter cheating players. But the 1906 earthquake and fire dealt a death blow to slot machine production in San Francisco. Although Fey did get back in business after his factory was destroyed, bans on gambling made headway. San Francisco first prohibited cash prizes and then, by 1909, outlawed slot machines entirely. By the time the Prohibition alcohol ban started in 1920, slot machines had mainly turned into vending machines for gum, candy and mints.

Old West gamblers gave Fey his success in America, where he died, in 1944,  at the age of 82. His famous Liberty Bell slot machine is commemorated by a plaque on San Francisco’s Crown-Zellerbach building, the site of his workshop. Nevada is still home to his revolutionary slot machine, housed at the Nevada State Museum in Carson City. Even though today’s gamblers can push front panel buttons rather than pull the side lever, Fey’s one-armed bandit survives on many modern-day slot machines, which all trace to the one he built in San Francisco.