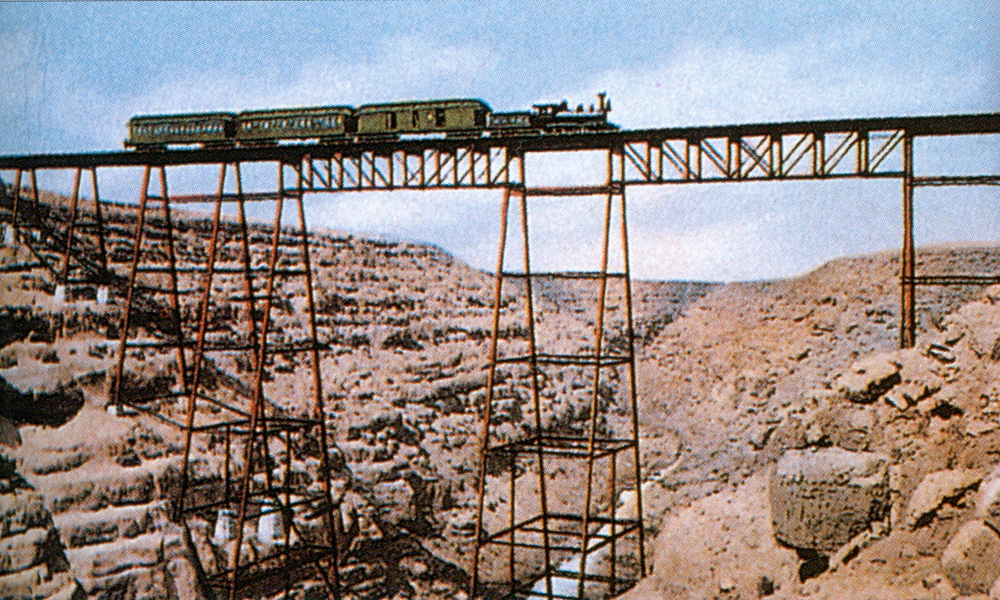 The chance to get rich quick as a uniquely American article of faith was virtually born in the West. Almost since its beginning, America was the only country in the world where folks were encouraged, through their own labors, to rise above their father’s station.

The rocky wilderness of the American West was a veritable treasure trove of gold, silver and copper and for the first time in history it was finders keepers. In other countries the finder had to share it with a monarch which was usually a royal veinte porciento (20%) if it was ore. However, if the king ruled it a treasure the tax collector took a whopping ninety-five percent.  Not so in the United States. With a single lucky break one could instantly make as much money as they could lend or spend or scatter out the window of a railroad car.  And it was the steam cars pulled by iron-bellied locomotives that made it all possible.

But when they started to build them they were warned they would be stopped cold by perpendicular grades, rugged canyons and gorges were so steep mountain goats shut their eyes and walked sideways.

Switchbacks, lazy loops and more kinks than a cheap lariat. It was said it took 260 miles of track to go 60 miles. From the air it looked like somebody dumped a sack full of black snakes into the mountains.

This was all made possible by the invention of the steam engine in 1825. By the 1850’s trains were traveling at speeds of twenty-five mph.  Since the time of the Romans people had only been able to travel at speeds of four mph.

Those little locomotives moved at a snail’s pace; they called them “coffee pots” and “peanut roasters” and it was said a reasonably sober fat lady could outrun one of them in a downhill race.  But they did the job.  They brought men and equipment into the mountains and took the gold and silver out by the ton. America became one of the richest nations in the world.

Because of the terrain they laid the tracks at 3’6” to better-navigate the sharp turns. The normal distance in the Standard Gauge is four feet, eight and one-half inches. Standard Gauge in the U.S. is: 4’8 ½” inches. They burned a lot of water and coal. It took 1,000 gallons of water to go fifteen miles and they burned six to nine tons an hour or 134 pounds an hour. Them firemen had to shovel a lot of coal to make that engine roll.