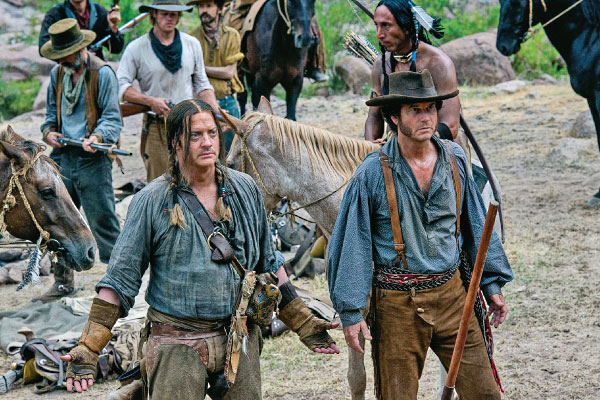 The script touched something deep inside me, which was how much I’d always wanted to make a Western.”

Director Roland Joffé’s voice charges with enthusiasm as he describes the emotions he felt during his first reading of producers Leslie Greif and Darrell Fetty’s script for Texas Rising, the History Channel’s eight-hour miniseries event, which airs over four nights beginning on Memorial Day.

After enjoying enormous success with 2012’s Hatfields & McCoys for the History Channel, Greif cast his creative net on the thundering epic saga of the Republic of Texas, its formation after the 1836 battle of the Alamo and the creation of the legendary Texas Rangers who fought to keep the peace.

He found the ideal collaborator in the British Joffé, who has earned Academy Award directing nominations for his first two feature films (1984’s The Killing Fields and 1986’s The Mission), honored for their intensely dramatic, and exquisite, visuals.

“Every Saturday morning, I’d watch Westerns in the cinema, and they
became ingrained in one’s imagination,” Joffé warmly recalls. “What I loved about those movies was the way in which geography played such an important part in forming character, and that, in a way, formed some of my thinking of what to do with Texas Rising.”

That thinking included a truly cinematic approach by both producer and director, resulting in a decision to film Texas Rising in a widescreen process. “We visualized it as a film,” Joffé says, “and didn’t want to be restricted by the old television format, because people have bigger screens now. We wanted to capture that open landscape that’s such a part of the Western.”

The near-only woman in the piece is Cynthia Addai-Robinson as Emily D. West, the beautiful “Yellow Rose of Texas,” who came to symbolize the Texas Revolution, a role that fascinated the actress.

“From the first moment of collaborating with Roland, I knew this was going to be a special experience,” Addai-Robinson says. “I also knew that there was going to be a lot of work, and a great director is not only guiding you in what you are already doing, but also pushing you to do better.”

One of the challenges she encountered was researching West’s mysterious character. “Her story’s more like historical folklore,” she says. “There are varying accounts of who she may have been and a lot of blanks for me to fill in. My best resource was the library of the African American museum in Los Angeles. I really wanted to develop a fully realized idea of this woman and what her life would have been like in this time period.”

Karnes, though, is a figure few know, making the discovery of his achievements all the more important to the actor playing him. “He died very young, but he was the Ranger who was the great communicator with the Indians, and he brokered all the treaties that were later broken when big business pushed West,” McDonald says.

Producer Greif immersed his cast and crew in classic Western films, making more than 100 available for viewing at the hotel.

“I spent a lot of time with Gary Cooper,” McDonald says. “It was brilliant to watch all those classics and keep our heads in that space.”

John Wayne’s Durango ranch, often used for the actor’s films in the 1960s, was a filming site for the series. “The ghost of John Wayne, I often felt on my shoulder,” Joffé says.

Beyond these Hollywood echoes, the director reminds us that Texas Rising is about a great struggle: “This is a fair telling of a story about democracy, and fighting for it, the way Houston did, in a land that wasn’t forgiving, facing Santa Anna. This is about a battle, from both sides, and how something new and different was forged, that became Texas.”

C. Courtney Joyner is a screenwriter and director with more than 25 produced movies to his credit. He is the author of The Westerners: Interviews with Actors, Directors
and Writers.