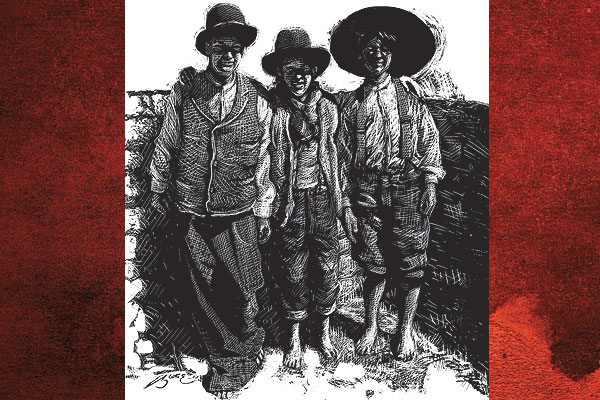 Ever since 1952, when Bob Mullin and Phil Rasch found the marriage record of William Antrim and the Kid’s mother, Catherine McCarty, the truth about the origins of the man we know as Billy the Kid became a done deal—the Kid’s real name was Henry McCarty; he had a younger brother named Joseph; and the brothers had witnessed their mother’s marriage, along with a Harvey Edmonds, who possibly was a church member.

Backed by the documentary nature of a marriage record, these became facts.

But history has proven these “facts” untrue. And even more, we may finally know the birthplace of this infamous outlaw.

Sometime around 2010, I discovered a second record—missed not only by Mullin and Rasch but also a host of later Kid hunters—in the annals of the First Presbyterian Church of New Mexico in Santa Fe. It recorded that, on March 1, 1873, the Reverend McFarland married William H. Antrum [sic] to Mrs. Catherine McCarty. Witnesses were recorded more readably as Harvey Edmonds, Mrs. A.R. McFarland, Miss Katie McFarland, Henry McCarty and Josie McCarty.

Questions clamoured in my mind: were a 10-year-old boy and his 13-year-old brother considered acceptable witnesses to a marriage? Wasn’t “Josie” far more likely to have been a shortened version of “Josephine?” Could “Josie” have been a female relative of the bride? And might the other witness, Henry McCarty, be an adult too?

Come to that, why did that “jolly Irish lady, full of fun” hitch her wagon to a pious, taciturn prospector? Why would a footloose miner take on a middle-aged woman with two sons to feed? And why, after spending a year and a half in Wichita, Kansas, did the couple marry in Santa Fe, New Mexico?

Maybe they didn’t know until they got to New Mexico that, in 1855, the New Mexico Territorial Legislature had passed a law prohibiting unmarried couples from cohabiting. If they married only because of the law, that might explain the couple’s distinctly unmarital lifestyle in Silver City, as well as the fact that in later years (as his pension applications confirmed) Antrim had difficulty remembering the details and shied away from discussing them.

At this juncture, I turned to two fine researchers, Susan Stevenson and her father Gary Jones, themselves connected by family ties to Lincoln County. Many Internet hours later, we located a likely Harvey Edmonds in Rome, Oneida County, New York. Born in 1810, he had, by 1861-62, become a director of the NY, Albany & Buffalo Electro-Magnetic Telegraph Company in nearby Utica. A decade later, he was still in Rome and (by today’s standards) close to being a millionaire.

We had concerns whether this was the same Harvey Edmonds who witnessed the marriage. Traveling to New Mexico in 1873 would have been no picnic for a man in his mid-60s, but we concluded Edmonds may have made the wedding trip in order to also visit his nephew Thomas Richardson Jr., then living in Santa Fe, along with William McCarty, another former Oneida County resident, and Henry McCarty (whose story comes later).

We then turned to Catherine McCarthy. Many more hours online narrowed the search down to two women, each with the right name and birth date, and both Irish immigrants. An 1860 census helped us narrow to one Catherine, born in 1829, who arrived in New York City from Liverpool on April 29, 1854. In 1860 census, she was a 30-year-old domestic servant in Utica, working in the 10-bedroom Rutger Park mansion of the wealthy John Munn family.

Adding weight to this being “our” Catherine was the fact that living just eight houses away from Munn’s so-called “castle” were the brothers John J. Bonney (age 27) and Edward Finch Bonney (age 22). Did Catherine have a relationship with one of these Bonneys, who, when she became pregnant, declined to do the decent thing, leaving her with the illegitimate child she would christen William Henry McCarty? Although no record of a relationship between Catherine and either Bonney brother exists, we were encouraged by the fact that, nearly 20 years later, the Kid would adopt the surname Bonney.

Working in a rich man’s mansion, Catherine would have had to find a home for her baby elsewhere. Perhaps he was the one-year-old Billy McCarty living in Utica in 1861 with 39-year-old Patrick and 36-year-old Mary McCarty—infuriatingly, the only time these two adults can be found anywhere on the historical record.

When or whether Catherine and her son left Utica is not known. She may have been the Catherine McCarty (with, inter alia, a son named Billy) who, in 1870, was running a boarding house in St. Louis, Missouri, where she met Billy Antrim, then living halfway between there and Wichita, Kansas. Or son Billy McCarty may have lived with his mother’s relatives until 1872, when Catherine migrated to Kansas. Whatever the back story, in due course, they all arrived in Wichita.

With Catherine now suffering tuberculosis, Antrim and the McCartys moved on, heading for southern New Mexico, where the climate might alleviate Catherine’s illness. Antrim, keen to hunt for gold, probably called on relatives in Denver, Colorado, to help him, as well as a sister living in Santa Fe, New Mexico. Our findings on the identities of the other members of the wedding which follow present a convincing world for the Kid to have been born into, with a believable—or perhaps in the case of Josephine McCarty, almost unbelievable—family.

Josephine “Josey” McCarty was almost certainly a close relative of the bride. She was born Josephine Fagan in 1824 in Richmond, Virginia. On July 28, 1845, she married lawyer Robert McCarty (born 1808 in Lewis County, New York) in Washington, D.C.

Three years or so later, Robert sailed to Europe, leaving his pregnant wife at home. Josephine and her (now) three children followed later, but en route to Europe, she had an affair with the ship’s captain. When she reached Paris, her husband and her lover wounded each other in a bowie knife fight. Her marriage ended catastrophically, and Josie returned home alone.

After studying medicine for four years in Philadelphia, Pennsylvania, Josephine—calling herself variously Virginia Seymour and Emma Burleigh—set up a “medical practice for women” (an abortion clinic) in St. Louis, Missouri.

In February 1862, she was arrested as a Confederate spy and locked up in Washington, D.C.’s Old Capital Prison. There, Superintendent William Wood “turned” her; while acting as a Union spy, she gave birth to two more children, both probably fathered by another lover, Milton Thomson.  In 1872, Josephine boarded a streetcar in Utica intending to kill him. The Derringer bullet somehow passed through his face and killed his nephew Henry Hall, sitting next to him.

In May 1872, at a sensational 17-day trial for murder, the “penny-dreadful” press lip-smackingly reported Josephine’s testimony that, when she was only 15, Thomson had sexually abused her. When her acquittal verdict was announced, the packed courtroom exploded with cheers that continued as she swept out of the courtroom and drove off. Within a year, she made the rugged trip to New Mexico to attend the Antrim-McCarty wedding.

Age did not mellow Josie. At 60, she was tried for indecent exposure involving three others, and she was jailed for six months. Any other scandals in her life, and where she died and when, have yet to be discovered. Surely someone will—must—write a biography of this remarkable woman.

Her history does reveal another connection to the Kid, through his supposed brother, Joseph. In 1870, a seven-year-old boy named Joseph Fagan was living in Ward 20, District 14, of New York City. His father, William, 47, was a widower whose wife Ann had died in April of that year. Was Josie, whose maiden name was Fagan, his aunt or cousin? Did Josie take him with her to Santa Fe, New Mexico, where he adopted the name of Joseph Antrim? Remember that in several later census entries, Joe cited New York City as his birthplace.

And finally to Henry McCarty. Whether he was related to Josephine, or was Catherine’s brother, brother-in-law or cousin, is unclear, and tracking him has been difficult.  We do know that in 1850, Henry McCarty, born in 1825, was working as a gardener in Rome, New York. A few years later, he was living next door to Harvey Edmonds, the man we believed to have witnessed the wedding.

The 1860 census shows Henry McCarty working as a lawyer in booming Central City, Colorado, then the “richest square mile on earth” due to a gold strike. He was working with mining engineer Thomas Richardson Jr., born in 1831, and Edmonds’ nephew.

Henry could have been the brother Catherine visited in February 1865, at the infamous prisoner-of-war Camp Douglas, south of Chicago, Illinois; unfortunately, no name was entered on the official order authorizing her visit. By late spring that year, the war ended and hundreds of prisoners joined the U.S. Army to serve out West. Was Catherine’s brother perhaps one of them? And was he still a friend to Richardson, perhaps even living near or by him in Santa Fe? If so, that might explain why Richardson’s uncle ended up a witness at Catherine’s wedding.

Tradition has always insisted that the Kid was born in New York. In tracking down the two witnesses to his mother Catherine’s wedding in New Mexico—Josie McCarty and Harvey Edmonds—have we discovered the Kid’s specific birthplace: Utica? Looks like it to me.

Read Frederick Nolan’s “What if everything we know about Billy the Kid is wrong?”