The Toughest News in the West 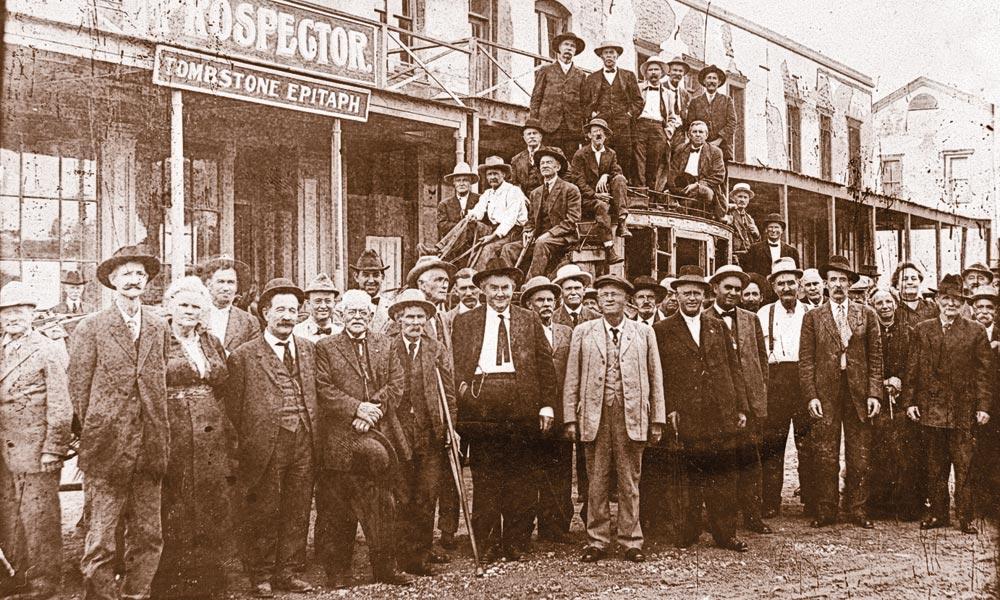 The Old West was filled with colorful names—none more so than The Tombstone Epitaph, the oldest continuous newspaper in Arizona.

Former Apache agent John Clum, who was just 29, helped found the paper soon after arriving in the silver mining boomtown in early 1880. He’d already owned and operated a publication in Florence, so he was no novice to the business.

When he got to Tombstone, Clum enlisted a couple of partners to put the operation together (the ownership group changed several times over the next two years).

Clum claimed that he came up with the name himself, contrary to stories that others had suggested it. That first issue included a Clum-authored article that trumpeted, “No Tombstone is complete without its epitaph,” evidence of the publisher’s Eastern education and natural wit.

Clum, who headed the local vigilante group and became mayor in January 1881, was pro-Republican, pro-business and pro-law ’n’ order, and so was his newspaper.  He was friends with the Earp brothers and the Epitaph made no bones about its opposition to the Cowboy faction.  The coverage of the famed 1881 street fight was decidedly one-sided in favor of the Earps and Doc Holliday.

Clum pulled up stakes in 1882 and sold his interest in the newspaper. The owner over the next several years is hard to track, and the newspaper’s political stance bounced back and forth. Tombstone began to fade after the silver ran out later that decade. The Epitaph continued to publish, but only on a weekly basis by the 1890s.

But it was still vital to the community. Thirty years later, the Epitaph helped finance and oversee Tombstone’s first Helldorado celebration in 1929.  Researchers began using its archives to write books and articles, and the paper itself featured more Old West historical sketches, helping to keep the local heritage alive, even as the town declined.

But the modern foundation was established in the mid-1970s, when Michigan businessman Harold Love entered the picture. Love had a dream of Tombstone as a tourist destination, so he bought up and renovated several Tombstone landmarks, including the O.K. Corral, Schieffelin Hall, the Crystal Palace—and the Epitaph.

Love and his associates made a deal with the University of Arizona, whose journalism students would gain real-life experience by putting out two local news issues per week.  Meanwhile, a new national and international edition would print history articles on a monthly basis.

That arrangement has worked well for more than 40 years, with many subscribers to the two editions accessing the papers online.  There’s no end in sight.

If Tombstone is the “town too tough to die,” then the Epitaph is the “newspaper too strong to write its obituary.”