The Son Rises on AMC 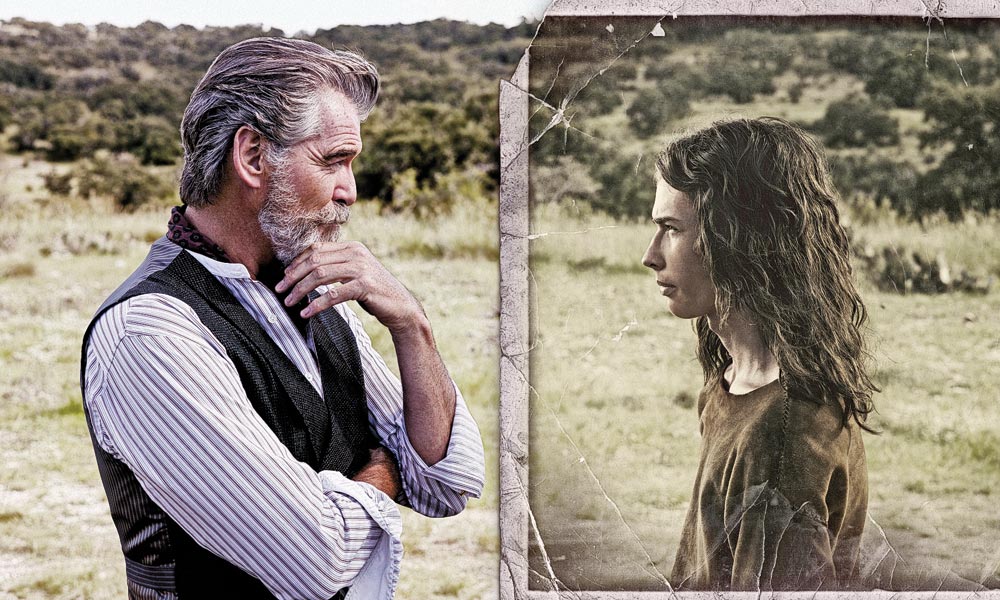 On April 8, a new series, The Son, will premiere on AMC. Starring Pierce Brosnan, the four-time James Bond who rode West in 2006’s Seraphim Falls, The Son chronicles the rise and fall of a family and its cattle and oil empires.

Based on the critically acclaimed bestselling novel by Philipp Meyer, the series starts with a bang! We are taken to 1849, in lush, green Central Texas, where teenager Eli McCullough’s turkey hunt has been spied by Comanches. They attack Eli’s family cabin, rape and slaughter his family, and drag off Eli, to be killed or made a slave.

Suddenly, it’s 1915, and the adult Eli (Brosnan), now the wealthy patriarch of a large family, is trying to shift the family fortune from steers to crude. Eli, his son Pete (Henry Garrett) and granddaughter Jeannie (Sydney Lucas) are trucking to town when they pass a tree with a lynched man hanging from a bough, the first fatal blow in a coming war between the Spanish gentry and the wealthy whites. Grandfather and granddaughter are each the most important person in the other’s life—much to Pete’s fury. Is Eli sheltering Jeannie or corrupting her? Is Eli involved in the lynching?

Each powerful story line can stand alone, but juxtaposed, they are enthralling. “The Child is father of the Man,” as Wordsworth wrote. How will one existence lead to the other? We go from the terror of younger Eli to the confident swagger of older Eli, entertaining guests with a sanitized version of the tale. Is he brave or horribly cynical? Is he a visionary or a swindler?

We know that beneath the charming Southern exterior beats the heart of a man taught survival by a Comanche war chief, lessons that have guided his life and will rule his descendants’ lives.

Adapting The Son into a series has been a long commitment for Meyer, who sold his first bestseller, American Rust, outright to Universal. “But for the second book, I’d gotten a big enough paycheck that I thought, what if we adapt it ourselves and maintain creative control,” Meyer says.

The book behind that five-year development process was a new type of novel for Meyer. Like Louis L’Amour before him, he traveled to all the settings for his story, but took his adventure further, learning historical Comanche ways, skinning buffalo and drinking their blood.

The only cast member he had in mind was for the part of young Eli-—Jacob Lofland, from 2012’s Mud. “He’s amazing. This guy dropped out of school in 7th grade; he’s had no acting training, but he’s a natural artist,” Meyer says.

Meyer taught Lofland and other cast some of the skills he’d acquired. “I’ve never really shot with a longbow much,” Lofland says. “Philipp Meyer took me on two days of lessons. We practiced for a couple of hours each day, ’til we got to where we were both happy. He likes hunting and fishing. We get along really well. We’re like the two rednecks on the set.”

Playing Toshaway, young Eli’s Comanche captor, is Zahn McClarnon, of 2015’s Bone Tomahawk and Officer Mathias on Netflix’s Longmire. “It starts off as a pragmatic relationship. He’s captured for a reason—to work. Eli’s a young, strong kid. And it grows into more of a father-son relationship, where Toshaway sees the potential in the kid and starts to care for him as his own son. Even more than old Eli, Toshaway is the patriarch of the series,” McClarnon says.

In the 1915 story line, Madrid-born Carlos Bardem plays Pedro Garcia, the leader of an old and proud Tejano family, trying to keep a grip on his power as the more recently arrived whites, including Eli, try to squeeze him and his people out. It doesn’t help, Bardem says, that Garcia has a willful daughter (played by Paola Nuñez), “who is the apple of his eye,” and sons-in-law willing to rustle McCullough cattle for the revolution.

“It is a balancing act,” he adds, and with the utter contempt that Eli shows Garcia, “it is hard to keep his dignity.”

Executive Producer Henry Bronchtein, who won two Emmys for The Sopranos, sees a similarity between Eli McCullough and Tony Soprano. “They’re alpha males,” Bronchtein says. “One thing they have in common is that they get away with doing bad things, and people still love them. That’s a charismatic thing that Pierce brings to the role, and yes, I think audiences will come to love Eli.”

Brosnan charms everyone—even his horse has a crush on him, says Line Producer and writer Kevin Murphy, who explains: “Whenever Pierce goes somewhere, his horse wants to be with him, so you have to tie the horse up. They once neglected to tie the horse, and Pierce went into our ranch house to use the bathroom. We turned around, and the horse was walking up the steps of the porch, into the house, to follow Pierce to the bathroom.”