The Bisbee Deportation of 1917 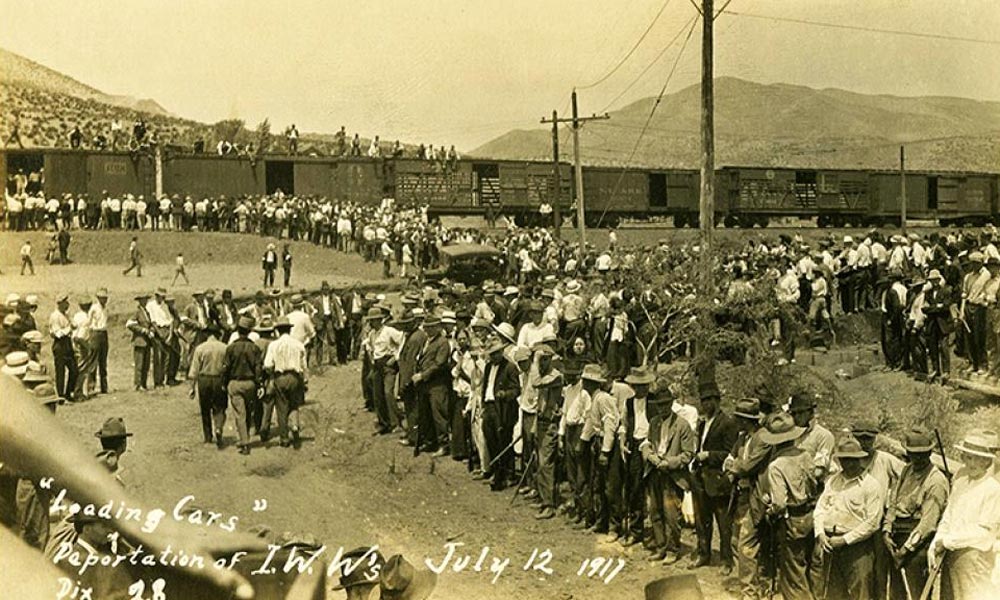 What  happens when a corporation, the sheriff and citizens are all in collusion to do something “wholly illegal?” The giant Bisbee Deportation of July 12, 1917. It was the second deportation of mine workers in Arizona that month.

Phelps Dodge, the giant mining company, was then headed by Walter S. Douglas, who had vowed to break every union in every mine in Arizona. So on July 5, 1917, when miners in Jerome, struck the Phelps Dodge mine there—union members of the Industrial Workers of the World, or IWW–Douglas ordered his superintendents to remove the miners from town. He had help from the Yavapai County Sheriff, who arrested more than 100, deporting 67 of them by train to Needles, California with orders not to return. When the IWW protested, Republican Governor Thomas Campbell declared the IWW had “threatened” him.

By then, Bisbee miners were already on strike. Although they were seeking better working conditions, Phelps Dodge made them out to be traitors to a nation then at war. Douglas apparently felt his Jerome tactic was fine, so he worked with Cochise County Sheriff Harry Wheeler to do a repeat in Bisbee. But this time, it wasn’t a handful of miners, this time it was some 1,300 miners and their supporters. They were rounded up on July 12 and originally held at a local baseball park before being loaded into cattle cars and deported 200 miles to Tres Hermanas in New Mexico—16 hours away. Then they were unceremoniously deposited, and told not to return to Bisbee.

Sheriff Wheeler had lots of help—he’d deputized about 2,000 citizens who turned on the miners. And to be sure no do-gooders interfered, they shut down all communication to the outside, so it was some time before the incident was reported to the world.

Meanwhile, New Mexico Republican Governor Washington Ellsworth Lindsey, in consultation with President Woodrow Wilson, provided temporary housing for the deportees. A federal investigation concluded the deportation was “wholly illegal and without authority in law, either State or Federal.”

Back in Bisbee, Sheriff Wheeler went a little nuts. He became a ruling tyrant. He demanded anyone leaving or entering town to have a “passport” he issued; he interrogated residents and visitors about their views on the ongoing World War I and unions, and brought anyone he suspected before his kangaroo court. The sheriff was eventually ordered to cease these activities by the Arizona Attorney General.

After the federal investigation found all this was so wrong, 21 Phelps Dodge executives were arrested on May 15, 1918. This included Walter S. Douglas. Sheriff Wheeler wasn’t arrested because by then, he was serving in France in the war. But nobody was convicted—the U.S. Supreme Court said the federal government did not have the right to enforce the rights of the deportees. Arizona officials, naturally, never brought any charges against Phelps Dodge. A few miners sued, but they lost in state courts.

Today, the deportations in Jerome and Bisbee are seen as cautionary tales of
just how far “wholly illegal” activities can go when there’s collusion.