Gourmet Glitz at Gateway to the West 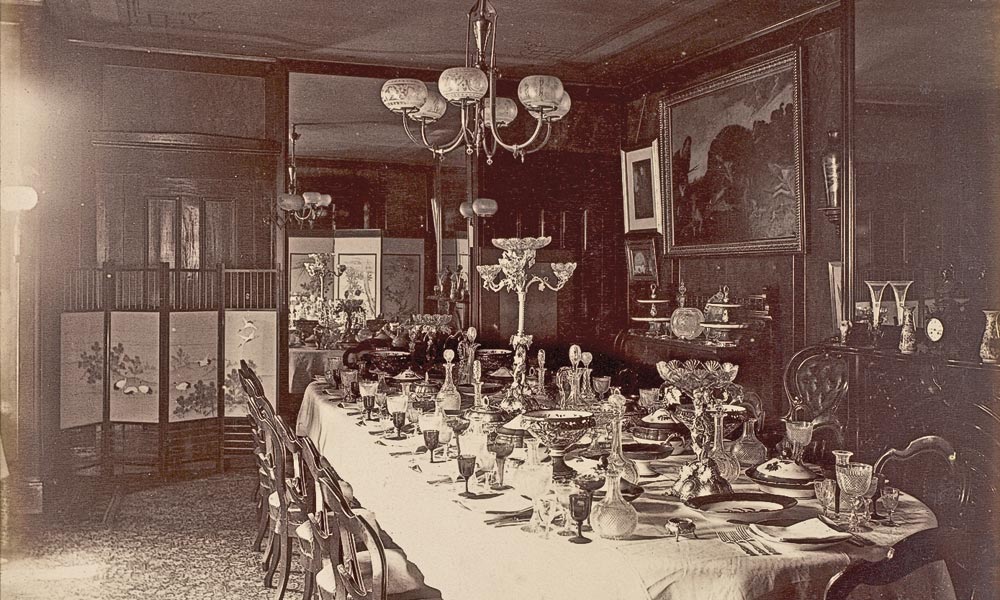 When high society ladies threw a party in the West, they spared no expense. Women living in rural areas had their challenges, but the wealthy ladies in the Gateway to the West, St. Louis, Missouri, had the luxury of almost any item they desired. Residing in a river town, with boats teeming full of imported goods, and a railroad town, where trains transported products of all kinds, made it easy for them to entertain.

One of the most sought-after social engagements in St. Louis was a party at the Campbells. Virginia Campbell and her husband, Robert, were known for their elaborate parties at their posh Lucas Place home, which they moved into in 1854. Virginia was a native of Raleigh, North Carolina, while Robert was an Irish immigrant who expanded on his fur trade riches to become one of the wealthiest men in Missouri.

St. Louis had six leading caterers in town who furnished staff for these high society parties. They earned $3 to $5 per event, and they wore their full-dress uniform, which included a spike-tall coat, boiled shirt, a high-worn collar known as a piccadilly and shiny patent leather shoes. In fact, they dressed just like the male guests, except they carried trays, opened doors and hailed coaches.

One visitor to St. Louis in 1861, D. Davis, attended a Campbell dinner party. “I had the honor of taking in to dinner the lady of the house & sitting on her right,” he wrote in a letter home to his wife. “…The courses were as follows, soup, fish, then turkey, shin venison, then quail, then ice cream & then nuts, raisins, etc.—everything was got up in the most luxurious style. Such dinners do not suit me. The courses intensified with all kinds of wine. I cannot drink any wine but champagne.”

Virginia died in 1882, three years after Robert had passed away, just as the party scene was making changes. “Flowers as table ornaments at dinner parties are not as much used…as last season, and the florists are very much disgusted. Huge candlesticks of brass are now the popular dinner-table decorations,” the St. Louis-Post Dispatch reported in 1882.

When flowers were still all the rage at St. Louis dinner parties, Virginia often served guests Trout a la Joinville, which was on the menu at her husband’s Southern Hotel in town. In honor of Gen. William T. Sherman, who was often a guest at the hotel and at the Campbell’s, serve up this St. Louis favorite for your general!

Roll trout fillets and place seam side down on a lightly buttered baking dish. Pour milk around the fish. Add the bay leaf. Lightly salt and pepper, and add cayenne. Cover with foil. Bake at 375° for 20 minutes or until fish flakes.

While the trout bakes, make the sauce. Melt butter over medium heat in a frying pan. Sauté the shrimp and remove from the pan, leaving the butter. Add flour and cook for one minute. Slowly whisk in the stock and cook until thickened. Add salt and pepper. Remove from the heat and slow whisk the sauce into the eggs, stirring constantly. Put back over low heat. Add the shrimp to warm through.

Remove the trout from oven when ready and place on a platter. Cover with the sauce.