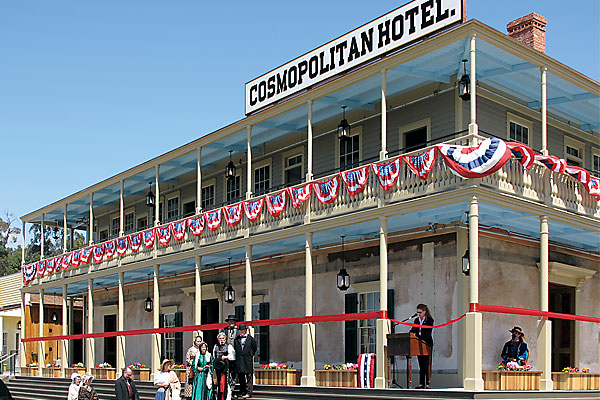 Casa de Bandini was once the grand home of an elite Mexican family in the days when San Diego was a pueblo and California was a foreign land. Thanks to many dedicated workers, including Victor A. Walsh, a trained mason with the alias Dr. Dirt, this two-story building has a new life in Old Town.

“Some people think this is just a building, but no, it’s a living connection, a living tradition, it’s part of us,” Walsh says with pride for a restoration that has won California’s coveted Mott Award for outstanding preservation.

Back in 1827, Don Juan Bandini built a single-story, thatched-roofed adobe “grand casa” at the southeast corner of what is now Old Town San Diego. At that time, the small settlement was made up of a few homes, only a couple of which had planked floors. His home, with its pine floor parlor, became the hub of social and political life in the area.

In 1869, a decade after Bandini’s death, stage master Albert Seeley bought the house. He added a second floor, converted the building into an L-shaped Greek Revival Hotel and named it the Cosmopolitan Hotel and Stage Stop.

By 1888, the original homestead was usurped by New Town. The Cosmopolitan lost its pizazz; it became a rooming house, then a factory to pickle olives, then a building in disrepair.

In 1928, Bandini’s grandson, Cave J. Couts Jr., bought the house as a tribute to his mother Ysidora, who had been married at the Casa de Bandini in 1851. He remodeled it as a hotel in the Steamboat Revival style. The entire building was stuccoed, with decorative white lath screens added to the top porch. He called his hotel the Miramar.

The Cardwell family bought the building in 1945 and restored it back to the Spanish Colonial style. By 1968, the property was owned by the State of California, just as Old Town San Diego was becoming a state historic park.

In April 2009, Walsh was called in for his expertise as an adobe conservator. He laughs and says that for a guy like him, the “earthy smells” of old adobe is ambrosia and the “sound of hammers and power saws is a symphony.”

Although the deterioration of the adobe meant whole walls had to be removed—“it looked like a war zone,” Walsh remembers—he still saw a “stately” building and kept finding pieces of its various lives, including hints that the Bandini family had walls decorated with flower designs and coral blue dye.

Thankfully, the large first floor room that had originally been used for family gatherings and dances is still there: it eventually became the sitting room for the guests staying in the tiny 10-by-11-foot rooms at the Cosmopolitan.

The sitting room was the most used room in the building during those days, says 64-year-old Walsh. “People entertained each other, they told stories, sang songs, played cards.”

He’s pleased that the 10,000-square-foot Cosmopolitan Hotel has kept its “historic fabric,” showing the blending of two distinct materials: adobe and wood framing. “There are precious few historic projects of this size and scale,” he notes, and its restoration “could be the defining moment” in the resurgence of the entire Old Town historic park.

Walsh has already attended several events at the Cosmopolitan; the hotel and restaurant is again becoming a major gathering place in the oldest section of San Diego.