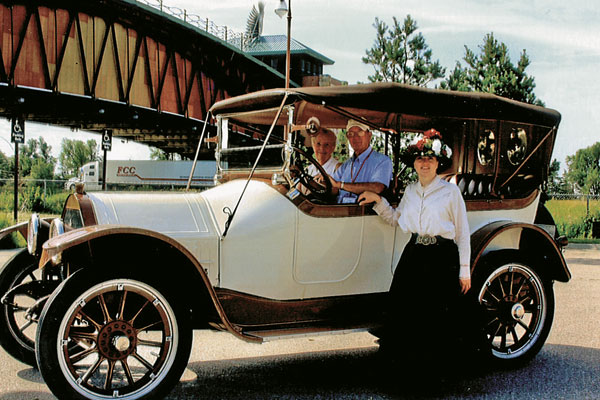 For Ronnie O’Brien, her connection to Kearney begins in 1842 in Ireland and ends more than a century and a half later in Nebraska.

Her husband’s ancestors, Edmund and Ellen O’Brien, settled along the Wood River in Nebraska. They found a good friend in Pawnee Chief Many Blankets, especially during a local fever outbreak in 1864; he took care of their only son out of four who survived the tragedy.
Generations later, Ronnie rekindled the friendship when she welcomed the Pawnee tribal members back to their ancestral homeland for a powwow hosted by the Great Platte River Road Archway, where she works as the director of cultural education. During 1873-74, the government had relocated 3,000 Pawnees to Oklahoma (only 1,200 survived the journey).
The residents of Kearney—population 30,000—have a great interest in the history of the area. About 5,000 showed up for that first powwow.
“People enjoy and want to expand on how much history Kearney offers,” Ronnie says. “It’s important to know where and how things get to be the way they are, and we need to celebrate that.”
To truly experience Kearney’s cultural riches, Ronnie recommends these stops.

Favorite Local Cuisine: Whiskey Creek in town sells more steaks than any other restaurant in Nebraska, the beef state (yep, beating Lincoln and Omaha restaurants). At Whiskey Creek you get to throw peanut shells on the floor, and the baked sweet potatoes are to die for!

Best Spot to View Wildlife: This one’s a no brainer. Kearney is the Sandhill Crane capital of the world. Every spring, more than half a million Sandhill Cranes gather on and along the Platte River. At the Iain Nicolson Audubon Center at Rowe Sanctuary, the migration lasts until around April 10, when the cranes fly north to their nesting grounds in Canada and beyond.

Historic Site Most Schoolchildren Visit: Fort Kearny, an emigrant stop between 1843-69. We have tremendous overland trail history, with the Oregon, Mormon and California Trails converging here, and with the Pony Express to boot!

Do-Not-Miss Attraction: The Great Platte River Road Archway! Spanning I-80, the Archway is the nation’s only museum built over an interstate. You never know who you’ll find walking around. You will likely interact with mountain men, gunslingers, Civil War soldiers, cowboys and pioneer women.

Old West Event to Attend: The Dancers of the Plains Pow Wow in June, featuring the Otoe-Missouria in 2011.

Best Local Resource: The Trails and Rails Museum/Buffalo County Historical Society; it has every record that has ever been written down in Buffalo County.

Everyone in Kearney Knows: Crazy Meek, the long-bearded mountain man who has been standing in the Archway’s front lobby every summer for years. It’s hard to be incognito, even if you run the theater department at the university, when you look like you’re straight out of 1830! Who’s his favorite ancestor? Jeremiah Johnson!

Preservation Project: The Archway is preserving a replica of the Lincoln Highway for the highway’s centennial in 2013. Thanks to a project organized by eagle scout Brian Cassler of Canton, Ohio, the replica will feature original paving bricks from the highway, which was built so folks could more easily reach the 1915 Panama-Pacific Exposition in San Francisco.