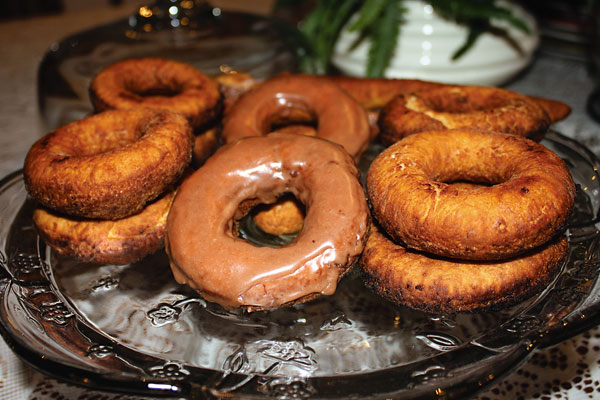 “Look at dat cake. Caesar’s Bakery.” I kid you not—that is the headline in the February 17, 1898, Idaho Statesman. I bet you didn’t know “dat” was a popular word in the Old West! It’s actually a spin-off of the “Who Dat?” chant that originated in minstrel shows of the late 19th and early 20th centuries.

A bakery is hardly the first business that comes to mind when you think about the wild and woolly West. In fact, it was quite a necessity for bachelors, miners, cowhands and people who could not or did not bake. Even though this was a time when people tended to make their own everything, ranging from clothes to condiments, bakeries were in demand.

The bakeries in the mid- to late-1800s tended to be run by German or Swiss immigrants. Many were operated by women. Bakeries offered ethnic breads, like rye and pumpernickel, but also sold popular breads of the day, including graham, Boston brown, wheat and white. In addition to bread and rolls, they sold doughnuts, cakes, candy and pies.

Probably the most popular name for a bakery was “The City Bakery.” Almost every Western state, including Arizona, Colorado, Oklahoma, Nevada, Washington and Idaho, had one. Another popular name was “New York Bakery.”

Anyone wanting to make money should open up a bakery, an unnamed flour merchant told the Kansas City Times in Missouri in 1885. He argued, “People must eat, you know, and they’ll eat more bread when they can’t afford to eat anything else.”

He claimed Kansas City bakers paid about $600 in monthly rent and sold out of their daily stock. A loaf of bread cost them less than three cents to make, and they sold the bread for five to 10 cents per loaf. Of course, any true salesman would say his trade made folks money.

Even though flour was the number one item used in a bakery, sugar and yeast were right up there. Fleischman’s is synonymous with yeast today, and it was just as popular back in the day. Fleischman’s began producing yeast in 1868, but it wasn’t sold in packets like we use today. Bakers bought their yeast in “cakes.” Not until WWII did the company create its Active Dry Yeast.

With all the yummy scents coming from a bakery, folks were easily tempted to pop in and try something tasty. Four Irish men in San Francisco, California, were a little too tempted. On January 13, 1887, Patrick Donahue, Andrew Green, John Kenealy and J. Barnes smashed in the window of R. Stem’s bakery and stole all they could carry. They must have been overcome with the heady aroma because they only made it to the park nearby. When the officers found them, they were busy eating and dividing up their bounty. Their sweet tooth landed them in jail on the charge of burglary in the first degree.

Your sweet tooth might appreciate some doughnuts. Making doughnuts at home can sometimes be a challenge, but it’s really worth the effort. The 1894 recipe shared here is much simpler than most and requires no yeast. As they used to say, “Give it a trial!”

1⁄2 tsp. cinnamon, nutmeg, cloves or lemon peel, or a combination of any of these

Sift the dry ingredients into a large bowl. Make a well in the center and drop in the egg. Pour half of the milk around the outside of the flour. Stir the mixture to incorporate the egg and then add the butter. Continue to stir and add the remaining milk. The amount of milk you add will depend upon the flour you use. As you mix, the dough should become firm enough to roll. Do not over mix the dough or it will become tough.

Lightly dust the rolling surface and roll out part of the dough into about one-quarter inch thick. Cut with a doughnut cutter or shape into crullers.

Heat the oil in a deep pot and add enough shortening so the doughnuts will float. The oil should be between 350-375°F. Gently drop the doughnuts into the fat and allow to rise, then flip and cook for about one-to-two minutes longer.

Remove to paper towels and allow to cool. Frost with your favorite topping or dip into powdered sugar or cinnamon sugar.

Combine in bowl and dip the doughnuts in.