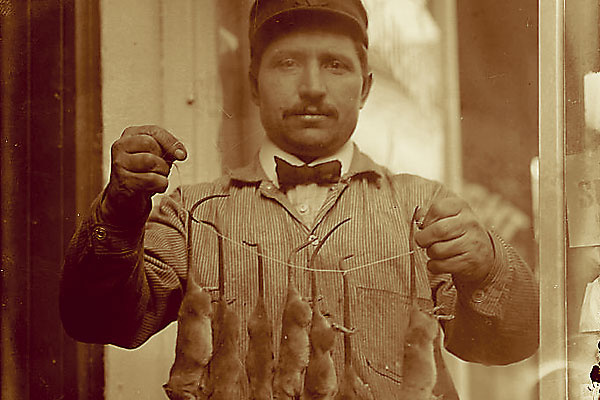 In the Frontier West, and throughout history, rats and men have lived in a delicate, fascinating equilibrium.

In the Frontier West, and throughout history, rats and men have lived in a delicate, fascinating equilibrium.

Although the rat was universally feared and despised in the Old West, frontier docs did not always recognize the rat as the formidable disease vector it is known to be today.  Rats can spread a myriad of diseases, ranging from rat bite fever and salmonella (bacterial infections) to Hantavirus and, the sometimes pandemic disease, known to latter 19th-century frontier docs, as bubonic plague.

Bubonic plague (caused by the bacteria, Yersinia pestis) is also known as the “Black Death,” the disease that decimated Europe in the mid-14th century. This scourge sometimes resulted in the death of more than half the population of some cities and regions. The actual disease vector is the infected rat flea, a critter able to jump more than two feet, sometimes landing on a mammalian host, like a young child, just in time to enjoy a blood meal while injecting the plague bacteria into the toddler’s bloodstream.

Given the endemic existence of plague among various rodents, including rats and mice in many parts of the West today, it may surprise one to learn that the first known case of bubonic plague to reach North American shores was not documented until the disease was confirmed in San Francisco, California, on March 6, 1900.

Robert Hendrickson notes in 1983’s More Cunning than Man that after the 1900 San Francisco epidemic (killing 102 out of 105 plague cases), the disease broke out again after the great earthquake and fire in 1906. Aided by the slaughter of “well over a million” rats in the two years prior to the earthquake, the “city emerged from the plague with [only] 88 deaths in 205 cases…,” probably secondary to better supportive medical care, since definitive treatment for the plague (antibiotics) had not yet been invented.

Needless to say, the bitter struggle between man and rat that had been simmering in the frontier West before 1900 was well underway after 1906, then driven by major public health concerns.

In the Old West, methods of rat control (cats and traps, aside) relied heavily upon poisoning. The unpleasant taste of early poisons had to be disguised by combining them with various foods, including meat or grain. If a rat survived the first bite of such a mixture, it would usually not return for a second bite, thereby, becoming “bait-shy.” Rat survivors are so smart that they have been known to urinate or defecate upon some poisonous baits, undoubtedly to warn other rats to stay away. To avoid the problem of bait shyness, historical rat poisons had to kill after just one bite. Consequently, these extremely potent poisons were also very dangerous to pets and humans, especially children.

No less lethal, an Old West standby, red squill, is still utilized today, but is somewhat safer for a very interesting reason. Hendrickson indicates: Red squill, an ancient rat poison, known to rat killers since at least 1500 B.C., is a flowering plant with large bulbous roots that are cut into slices, dried in the sun and then ground into various preparations, including a digitalis-like medicine that kills the rat by paralyzing its heart.

Very bitter and certain to cause bait shyness, red squill naturally causes emesis (vomiting), a characteristic that makes it somewhat safer as a rodenticide than other compounds that do not have this effect. Interestingly, “rats, like most rodents, and unlike humans, are unable to vomit and are not protected by red squill’s emetic quality.”

Many modern, more palatable, rat poisons do not cause bait shyness and are consumed by the rat over more than one feeding. One such poison, warfarin (related to the human blood thinner, Coumadin), eventually causes the rat to bleed to death internally.

In the interest of designing a safer, modern poison, we humanely offer the rat several delicious “last meals,” often before it still dies in a wall (just like yesteryear), left to stink up your house! Perhaps our efforts would be better directed at building a better mouse(rat)-trap!