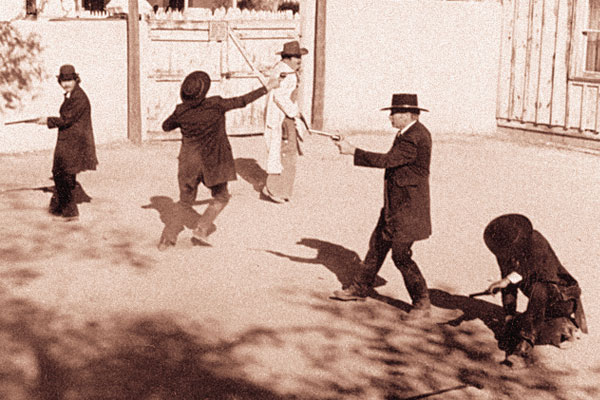 Twelve or 13 years have passed since this tenderfoot Midwesterner first visited Tombstone, Arizona (relatively late in life, but hey – better late than never). A friend showed me around. Our last stop was a two-story building on Fifth Street, just across the road from the offices of The Tombstone Epitaph. The door was open on a hot summer day, and we just walked right in.

The place, then and now, was…interesting. Boxes, books, files, papers strewn about on tables, photographs on the walls—semi-organized chaos. To the left of the door was a desk, behind which sat a somewhat cantankerous, white-haired and mustached older gent. Well, not exactly sitting. He was the lord of all he oversaw, regally lounging back in the chair and holding forth on Tombstone history, about Earps and Clantons and God knows how many others.

Thus was my introduction to Ben Traywick. He was—and is—every bit the Tombstone character as the famous outlaws and lawmen and shootists. He’s certainly spent more time (nearly 43 years) in the Town Too Tough to Die than any of those boys.

His journey to Tombstone has been a long, strange trip. Traywick is a proud Tennessean and son of the South, interested in history from Day One. He became a chemical engineer in California, making trips back to his hometown, Watertown, every other year.

In July 1968, the return took him through southwest Arizona. “I saw this sign that said ‘Tombstone—24 miles,’” he remembers. “Well, I’d never been to Tombstone, and I thought that’s something I should do.”

He intended to stay for an afternoon, which expanded into two days and two nights, as well as a resolve to make a big change. At age 40, Traywick quit his job and moved his family to Tombstone.

He bought a house, and for three months he roamed the area, checking out all the historic sites. He didn’t even look for a job, at least until he’d seen everything he wanted to see. Traywick then got a position with the Apache Powder Company, which made explosives for the mines (he eventually became general manager, spending about 14 years at the company before hanging up his hat).

He started writing during that time—articles and books about Tombstone history, for the most part. By 1971, people—locals and visitors alike—were asking him history questions. Traywick usually knew the answers, but if he didn’t, well, he would conduct the research until he did. At least unofficially, folks recognized him as the town historian.

In 1972, he put that interest to work in a different way. He (and his wife “Red” Marie, now deceased) formed the Wild Bunch and Hell’s Belles, a re-enactment troupe that staged gunfights around town (including at the O.K. Corral site of the 1881 shoot-out between the Earps and Doc Holliday, and the Clantons). Visitors got even more of a taste of the Wild West.

In 1983—the same year he retired—Traywick built a place on Fifth Street, with a shop on the ground floor and living quarters upstairs. He began holding court at the shop, welcoming visitors and selling them his books (he’s put out 35 so far and written more than 1,300 articles over the years).

In 1991, the town asked him to become the official Tombstone historian. No pay, of course, just some satisfaction and fun. Traywick couldn’t say no. And he did have fun.

That phase of his life came to an end last October 26, on the 129th anniversary of the famed gunfight. At high noon on that day, Ben Traywick retired as town historian.

Why? It certainly wasn’t for health reasons, since the man is as strong as a bull, even at age 83. And he wasn’t bored by the gig. “You might say I’ve refocused my objectives,” he explains.

Those new goals include writing a couple of books. One will be on the lesser-known characters in Tombstone’s history. The other is a biography of gunfighter “Buckskin” Frank Leslie: “I’ve spent 26 years and a fortune trying to find out what happened to him and where that sucker is buried. So I want to finish that one.”

He is also still in charge of publicity for the Wild Bunch, the group that he says is his proudest accomplishment during his time in Tombstone. “Because of them, 266 movies or television shows were shot here,” he says. “And we’ve contributed more than $200,000 to local organizations.”

Of course, he still welcomes folks who just happen to saunter into his shop (which is pretty much when wife Mary allows the door to be open). The organized chaos still crowds the place, except for the desk to the left side where Ben Traywick sits and tells the stories he loves.

When that all comes to an end and he meets his maker, Traywick knows where he’ll be. He’s had a place marked out for the last 25 years, not at Boot Hill (“I don’t want the tourists walking on me”) but at the Tombstone City Cemetery, established in 1884. He’ll join photographer C.S. Fly, his late wife Red Marie and Wild Bunch members who have gone on before.

His and Red Marie’s marker is engraved with the promise “We’ll Be Back.”

Anybody who knows Ben Traywick doesn’t deny that possibility.