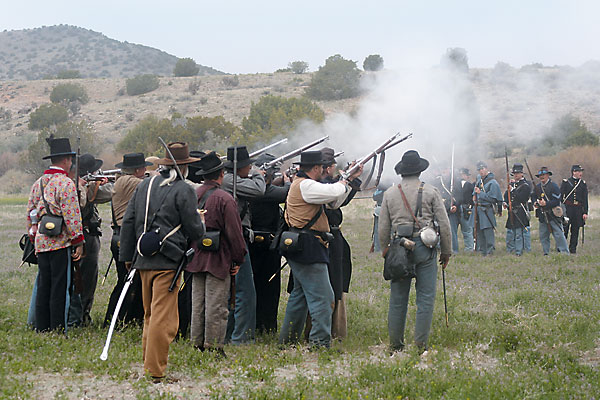 The Civil War and the American West are forever connected.

The Battle of Glorieta Pass occurred in March 1862, but folks re-enact it every May at El Rancho de las Golondrinas in Santa Fe, New Mexico.

It’s too cold to have that re-enactment in March, they tell me.

Oh, really. Well, here I am in May, freezing my butt off, waiting for the battle to begin. Every now and then, I taste snowflakes on my tongue. At least I could…if my lips weren’t frozen.

Maybe they should consider holding the Glorieta re-enactment in September. That’s when the John Brown Museum re-creates the Battle of Osawatomie of August 1856. Well, here I am, in mid-September, broiling in triple-digit Kansas heat, waiting for the battle to begin.

Why am I torturing myself? What does the American West have to do with the Civil War, which began—some say—150 years ago?

Everything. “It began here,” Judy Billings says. And she means before 1861. Billings, of Lawrence, Kansas, is touting Freedom’s Frontier National Heritage Area, which encompasses 29 counties in Kansas and 12 in Missouri. This Kansas-Missouri collaboration—that’s right, Jayhawkers and Border Ruffians can work together—focuses on the struggles that touched off the Civil War.

One such struggle was the Battle of Osawatomie. John W. Reid led some 250 Missourians to this abolitionist stronghold hoping to kill John Brown. Reid didn’t succeed, although he did kill Brown’s son, Frederick, and did burn the town.

“When I was in school, they taught us that the Civil War was something that happened back East,” says Bob Green, who takes on the persona of Reid in the Osawatomie re-creation. “But in reality, there were 800 to 1,200 battles fought in Missouri alone.”

And in Kansas? Sheriff Samuel Jones and his bushwhackers sacked Lawrence on May 21, 1856—almost five years before shots were fired on Fort Sumter, South Carolina. A few weeks later, John Brown’s militia fought pro-slavery forces at the Battle of Black Jack near Baldwin City. William Quantrill and his boys torched Lawrence again in 1863.

The Civil War and the West are forever connected—and I don’t mean in mediocre Hollywood movies like Major Dundee, Escape from Fort Bravo and A Time for Killing.

George Custer earned fame first back East, and it was Custer who, at Appomattox, Virginia, received the first flag of truce from Robert E. Lee’s rebel army. The Reverend John M. Chivington was a hero at Glorieta Pass before reaping eternal damnation at Sand Creek in 1864. Wild Bill Hickok was likely on hand, as a Union spy and sharpshooter, at the Battle of Pea Ridge in Arkansas in March 1862. The last Confederate general to surrender was Cherokee Stand Watie in Indian Territory on June 23, 1865. The Battle of Picacho Pass, northwest of Tucson, Arizona, was the westernmost battle of the war. (Okay, so it was only a skirmish involving maybe 25 combatants total.)

They even remember the Civil War in California. In Wilmington, Drum Barracks Civil War Museum is the last remaining original Civil War-era military facility in the Los Angeles area.

Everybody is getting set for the Civil War sesquicentennial. The National Oceanic and Atmospheric Administration (NOAA) has unveiled “Charting a More Perfect Union,” a collection of more than 400 maps, charts and documents prepared by the U.S. Coast Survey during the war—available free from the administration’s Office of Coast Survey website.

Hey, if NOAA can jump on the Civil War bandwagon, the West might as well too. Besides, the war didn’t just begin in the West. It ended out here.

The war’s last battle was at Palmito Ranch, May 12-13, 1865—a month after Appomattox—in south Texas.