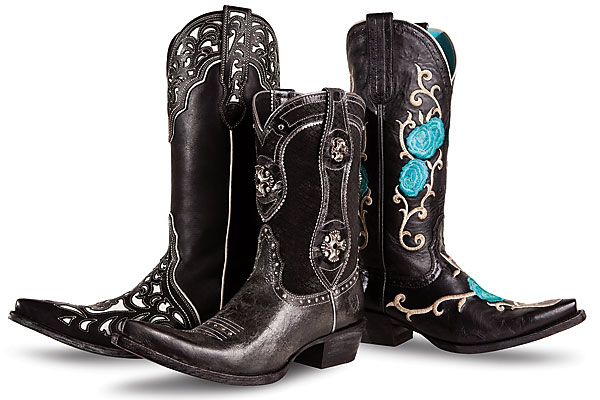 Y’know, my python boot is too tight, I couldn’t get it off last night.

A week went by, and now it’s July. I finally got it off, and my girlfriend cried,

The bottom line with cowboy boots is there’s no need to suffer for fashion.

Although the girlfriend’s sense of smell is assaulted in Frank Zappa’s overwrought tune about a too-tight boot, the real victim in this malodorous melodrama is probably the singer’s foot. Ill-fitting boots—whether too tight or too loose—are a misery to wear.  The bottom line with cowboy boots is there’s no need to suffer for fashion. Properly fit boots can be as masculine or as sexy as you want them to be, but they can be comfortable to wear and easily pulled on or off when they fit right.

Out West, you’ll find a tradition of long-term boot wearing not related to poor fit. Cowboys trailing cattle from Texas to Kansas seldom removed their boots while on the trail—even while sleeping. Drovers needed to be able to spring to action if the herd spooked and stampeded, or if bandits, skunks or other uninvited callers arrived in camp unexpectedly. Rapid deployment aside, unoccupied boots on the trail would easily become nesting holes for a host of unwelcome critters including snakes, spiders and scorpions. The old cowboy saw about dying with your boots on has practical roots.

Natural leather cowboy boots are no worse at causing foot odor than other enclosed footwear—no matter how long you wear them. Most natural leathers breathe and wick moisture, although snakeskins and other reptilian and scaly exotics are not as breathable as warm blood leathers. Plus, most people remove their footwear daily nowadays.

The bottom line is that while the boot is meant to be form fitting, the toes should be free to wiggle, and the boot should come off easily—even if they are python. Try to buy the best quality boot you can afford, but never buy a boot that doesn’t fit. The boot should fit snuggly, not ugly.

Sizing Up Your Boots

If you have a hard time getting a pair of cowboy boots on or off, or if they pinch, jam or cause blisters, then you may be wearing the wrong size. Here are some footnotes about proper fit:

• Postpone boot fitting until mid-afternoon. Your feet tend to swell as you walk on them. A good fit in the morning will tighten as the feet swell throughout the day. A good fit at the end of the day will be too loose in the morning.

• Try new boots on with your regular sock type.

• Your foot should slide easily into and out of a new boot.

• If the toes are jammed, check first to make sure there is no paper or a cardboard shaper jammed into the toe box.

• With your foot seated in the vamp, the leather should caress the instep and wrap snugly across the top of your foot.

• The ball of your foot should park at the widest part of the sole with enough room in the toe box for your toes to wiggle. If your toes are jammed up against the front of the boot, or if they feel pinched, the boot is too short for the length or too narrow for the width of your foot.

• If the boot feels sloppy at the ball, and if you can create a wrinkle in the vamp leather by running your thumb across it, the boot is too long or too wide.

• A slightly tighter fit in most leathers will ease as the leather stretches. Exotic skins with scales or tiles stretch less than the skins of warm-blooded animals.

• Keep in mind that different boot brands and styles fit differently. You may wear a 10 ½ D shoe and Roper, but your cowboy boot size may be 11 B. Also be aware that heel slippage is normal—especially in new boots that have stiffer soles. That slippage will become unnoticeable as the boot breaks in.

Legend says “no human could match the draw of Ringo.” That would be John Ringo the infamous bad man of Tombstone fame whose mysterious death in July 1882 has led to speculation that Doc Holliday and Wyatt Earp did him in. Whether they did or not, the name of the gunfighter Johnny Ringo has passed into our common folklore, and he is a cowboy to be contended with. As Lorne Greene sang-spoke in the massive hit 1964 record Ringo, “I nursed him ’til the danger passed. The days went by, he mended fast. Then from dawn ’til setting sun. He practiced with that deadly gun. And hour on hour I watched in awe. No human being could match the draw of Ringo.” The fame of Johnny Ringo is most recently tied to the 2011 debut of edgy Johnny Ringo boots by the Rocky Mountain Clothing Company.

In 1911 a 24-year-old Italian-American cobbler from Syracuse, New York, named Tony Lama mustered out of the Army at Fort Bliss in Texas. He immediately hung a shingle in nearby El Paso and began repairing and making shoes and boots for local ranchers and army personnel.

When the stock market crashed in 1929, he lost his business, but the bank didn’t know what to do with the equipment it acquired in his bankruptcy. They gave it all back to him, and he set up shop again. This time he focused on boots and flourished.

This year marks Tony Lama Boots’ 100th anniversary, complete with a Centennial Collection of boots to celebrate the occasion. Tony Lama is also looking for some of its history. Armando Romero, Justin’s top marketing guy, joined Tony Lama Boots in 1973. Besides being an ad man, Romero is a history buff. “Despite having a long history, Tony Lama doesn’t have an archive to speak of,” he lamented recently.

With that oversight in mind, the company has launched a contest to find the oldest pair of Tony Lama boots. All participants receive a rebate, while the grand prize winner receives a custom pair of Tony Lama Signature boots and a trip to the 2011 National Finals Rodeo in Las Vegas. The deadline to enter is March 30, 2011:  TonyLama.com/en/OldBoots.html

So check your attics, ask around your family and friends, and see if you can dig up some early Tony Lamas.