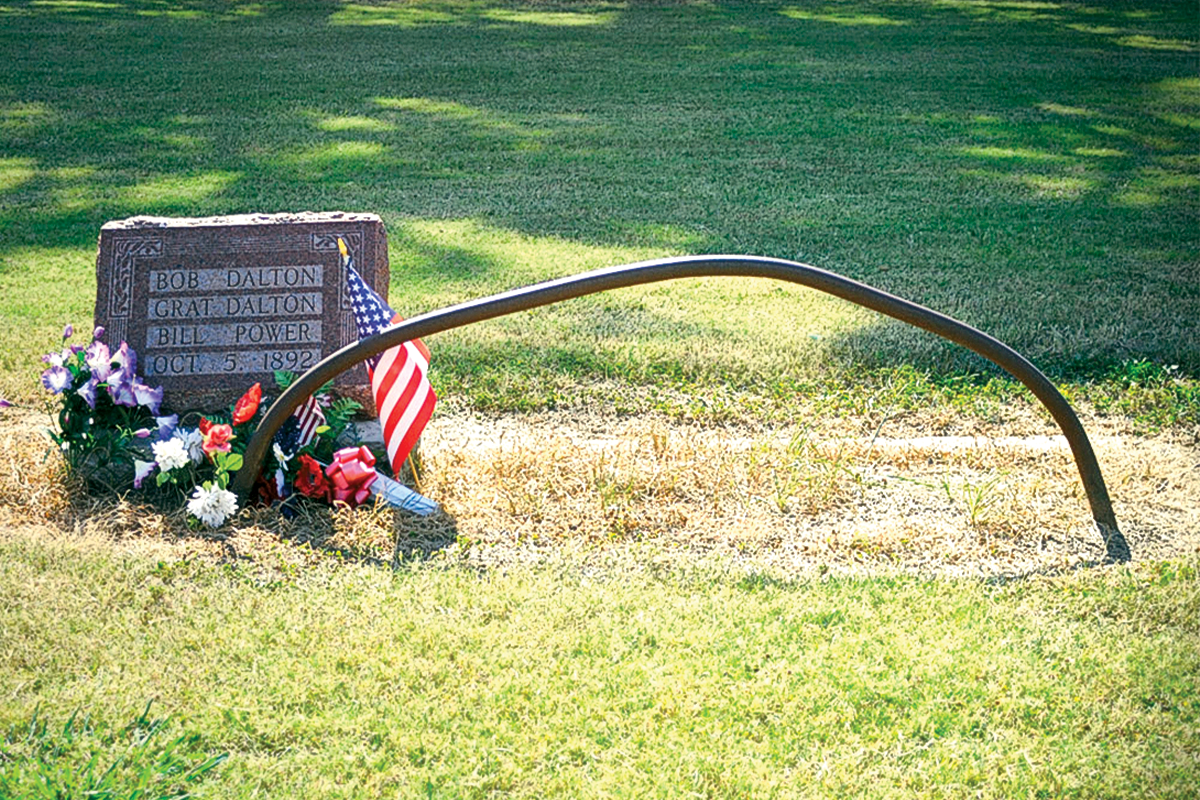 Visitors to the Elmwood Cemetery in Coffeyville, Kansas, are generally looking for the last resting place of members of the Dalton Gang. They’ll find a nice stone bearing the names of Bob and Grat Dalton and their compatriot Bill Power (or Powers). The boys were dumped into a common grave after the botched robbery of two banks on October 5, 1892.

But visitors will also see a metal pipe jammed into the ground in front of the marker. And therein lies a story unto itself.

Coffeyville residents were angry after the raid. Four esteemed citizens had died, including City Marshal Charles Connolly. There would be no funeral or memorial niceties for the outlaws/killers. Their bodies were quickly interred in an unmarked grave at the very back of the cemetery. The spotlight, the honors, would be on the brave defenders who were willing to give their lives to fight evil.

Apparently, though, someone had a sick sense of humor.

Sometime after the bodies were buried, an unknown person stuck a lead gas pipe in the ground at the grave site. Both ends went into the ground, forming something of a misshapen arch. It was intended as an insult to the dead bandits—or at least that’s what the locals thought then (and now). But where there are unanswered questions, myth takes over.

It’s not clear when the rumor started, or who started it. But at some point, the story emerged that the pipe was part of a hitching post used by the gang to tie up their horses in Death Alley. That explanation has been floating around for at least a century. It’s even on a sign at the cemetery.

Photos of the scene, taken just after the shootout, show that the Dalton horses were tied to a wooden fence. In fact, there’s no lead pipe apparent in any of the pictures. It’s believed that someone picked up a piece of metal junk lying on the ground in the alley and stuck it over the Daltons and Power. In effect, the message was that the bad guys were worthless scrap.

Emmett Dalton, the lone outlaw survivor of the stickup, placed a fine and formal marker at the site in 1931. But within a few years, it had been stolen—and nobody came forward to replace it. For almost 30 years, the old lead gas pipe was the only evidence that this was the site of the infamous grave.

In the late ’60s, the town put up a replica marker over the Daltons and Power. The grave had become a tourist attraction, so it paid to help visitors know just where the boys were buried (and who knows how many photos have been taken there). That marker, too, was stolen in 2010, but police found it four months later. This time, officials cemented the stone to the base so it couldn’t be dislodged.

And all that time, the lead gas pipe stood as a stark reminder of a bloody day in the Old West—and it shows just what local folks think about the dead outlaws who brought death and mourning to Coffeyville in 1892.