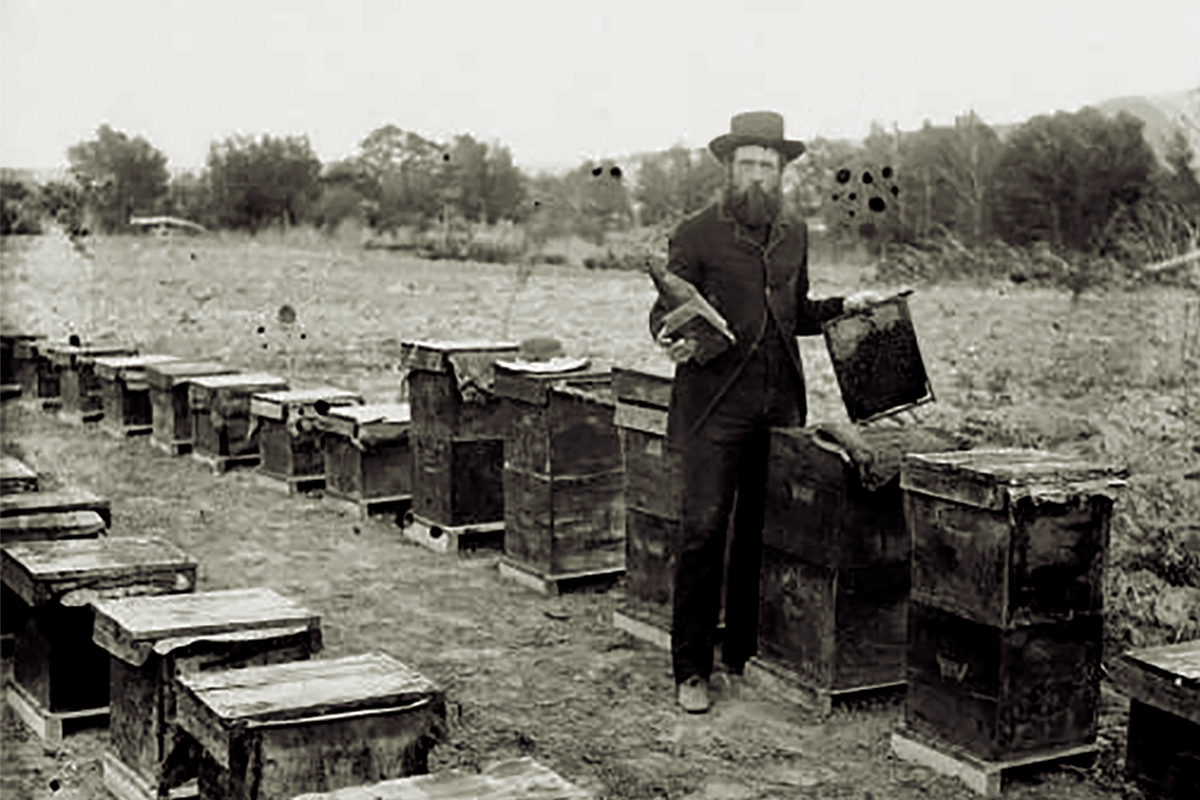 Utah has been a leader in apiary science for crop pollination and honey production for over 150 years.

Honey is nature’s sugar, and enterprising pioneers in Utah knew that, so they started beekeeping, which became popular in the 1870s. Mr. A.F. MacDonald shared his thoughts on the subject. In 1870, he told The Deseret News he believed investing in honey bees for home consumption was good for many reasons. He noted that sugar dependency could go down, and if enough bees were imported, honey could be exported. He noted, “I got thirty pounds of honey from two swarms of bees…and this is only a small part of what can be done.” In 1872 the Deseret Bee Keepers’ Association was formed, and various other bee associations formed over the years.

By 1880 the delicious nectar was being harvested across the Utah Territory from bees imported from the East as well as from European countries like Italy. In 1882 beekeepers met in Salt Lake City at the Territorial Beekeeper’s convention, and men from all around the territory presented their honey production results. Some hives produced as little as 90 pounds to as much as 3,000 pounds. Other topics included how cold weather and brood disease decimated some hives.

Nephi Miller was one of the many beekeepers in Utah, but his company is the only one still in operation. He started Miller’s Honey Company in 1894 when he traded five bags of oats for seven bee colonies that began his legacy. He also served as the president of the Cache Valley Beekeepers’ Association for several years. Nephi’s sons continued the business, and it’s still being run by his descendants. The Millers, along with the Gambers, invented the honey bear container in the 1950s that’s seen everywhere today. Ilene Miller, a fourth-generation owner, told me, “Growing up and to this day, we never used sugar. Honey was used for everything that needed a sweetener.”

In 1897 honey had become a Utah commodity, and the state senate debated on whether to approve funds for a state bee inspector. Some senators were in favor of it to stop the spread of brood disease, while others argued it was an unnecessary regulation. Some claimed, if approved, beekeepers didn’t have to use the inspector but could if they asked for an inspection. Senator Evans argued that a bee inspector was as important as a liquor inspector to ensure poisons did not go into the product. The Daily Tribune in Salt Lake City reported, “Senator Caine inquired if people were not as likely to be injured by eating honey from diseased hives as by drinking poor whiskey.” No one replied to his question and the decision was postponed until the House acted.

By the late 19th century, merchants knew that beekeeping was a good business. Firms like Whitney & Pierce in Springville offered beekeeping supplies. They advertised, “We are now making a specialty of manufacturing bee hives and do it in first-class shape.” G.W. Mickel in Provo did the same and noted, “Quality first-class and priced the lowest.”

The Salt Lake Herald ran a story about the various uses of honey per the American Bee Journal. They noted that honey was used for making candy, pastries, cakes, jellies and jam, canning fruit, curing hams and other meat. They also noted that it was used to make drinks like Meade, cocktails, as well as vinegars and for medicinal uses. Utah restaurants served the golden nectar with cakes and muffins and bills of fare served honey with griddle cakes, biscuits and waffles.

Combine in a small bar glass and stir with a spoon. Serve in the wineglass.

Recipe from The Bar-tender’s Guide by Jerry Thomas, 1862.