Adair Before They Die 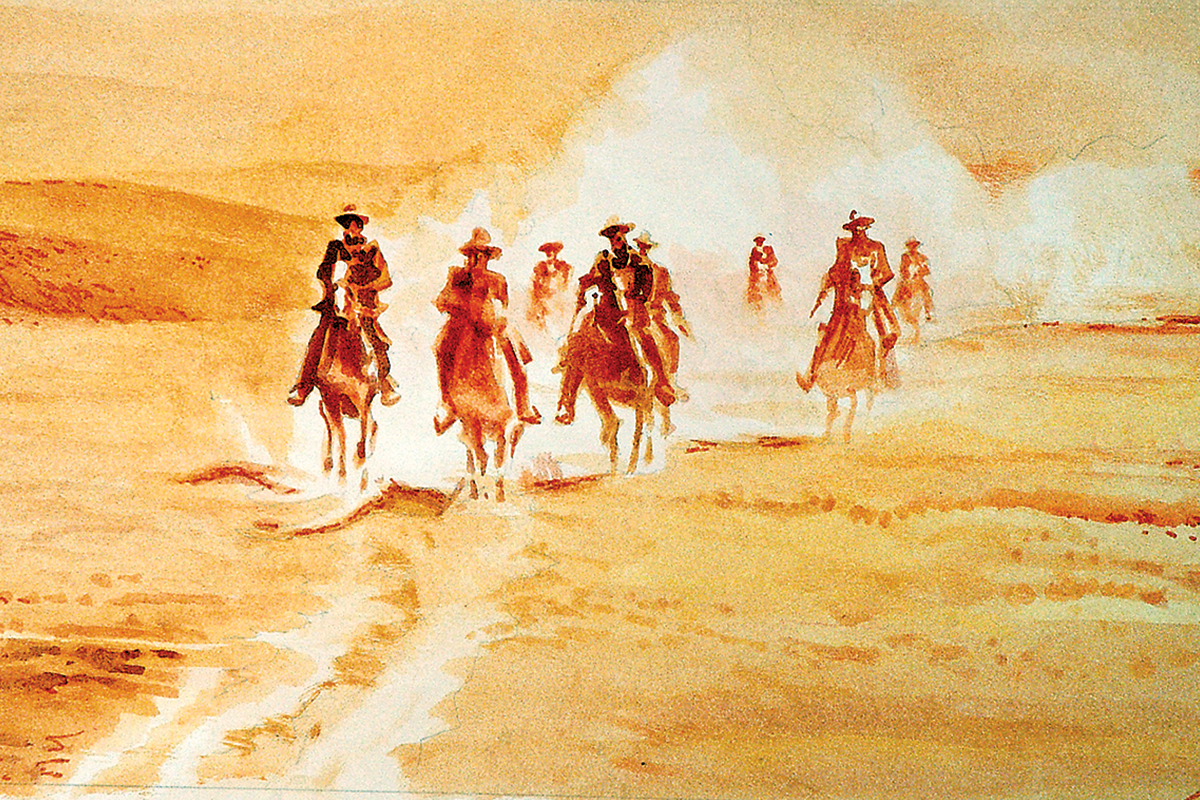 The Last Successful Raid of the Daltons Turns Tragic

Riding eight strong, the Dalton Gang enters Adair, Indian Territory (present-day Oklahoma). They com-mandeer the train station, preparing to pilfer Katy Train No. 2 (a Missouri, Kansas & Texas passenger train). When the train glides into the station at 9:42 p.m., the gang boards, capturing members of the train crew without incident and telling them to obey or “have their brains blown out.”

As the crew is marched down to the express car, one of the gang members begins shooting toward the town, evidently trying to discourage  towns-people from getting any ideas about joining the party.

As the robbers load up, Winchester slugs begin whipping very close to the heads of the outlaws. Eight train guards, including lawmen J.J. Kinney and Capt. J.H. LeFlore, are shooting out the windows of the smoking car and at the gang.

With the firing increasing, the lawmen get off the train and “fort up” in a coal house next to the tracks. The lawmen pour a heavy fire at the crowd around the express car. The robbers use their hostages as shields while they shoot into the wood building.

Within moments, three of the lawmen inside are hit and knocked out of the fight. The July 21 Indian Chieftain reported the casualties: “A bullet went through the flesh of Mr. Kinney’s shoulder, another struck Johnson’s watch and imbedded itself in his arm, while Charley Leflore [sic] had the stock of his gun struck with a shot and the slivers driven into his arm.”

Gang member Charley Pierce finally shows up with the horses. While one outlaw returns fire at the guards, the others mount up and clatter down the streets of the small town, sending about 20 shots at two men sitting in front of the Skinner Drug Store. Both bystanders are doctors—Dr. W.L. Goff is mortally wounded; Dr. T.S. Youngblood will lose part of his right foot. (Gang apologists later claim the two men were shot by errant bullets fired by the train guards, yet it is more likely the men were hit by outlaw bullets.) 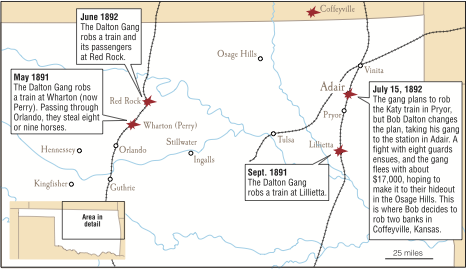 Bob sensed that the train carried a car full of loaded Winchesters. Bob’s suspicion turned out to be correct. Inside were Wells Fargo detective Fred Dodge and the formidable U.S. Deputy Marshal Heck Thomas, among others.

Letting that train depart, the gang stood by. Soon enough, an un-escorted express train arrived, and the gang moved in for the kill. When the gang strong-armed their way into the car, they unfortunately found little money. The big money had gone through with the first train. The chagrined gang took what was there (less than $3,000) and then mugged a train employee of his gold watch and pocket cash, and, probably just for spite, took the crew’s lunchboxes.

By the time of the train robbery in Adair, the Daltons are already being chased by some of the best lawmen in the business, including Wells Fargo Detective Fred Dodge and Deputy U.S. Marshals Heck Thomas and Chris Madsen.

J.J. Kinney, special detective of the railroad, and Capt. J.H. LeFlore, chief of the Cherokee Indian Police, discover the Daltons by chance, when the gang members board the Adair train.

On July 21, 1892, the Indian Chieftain re-ported the robbery, stating that once the guards became aware of the robbery, they opened fire at the outlaws through the car windows; the robbers responded in kind.

The article also stated, “The railroad and express companies have joined in an offer of $5,000 each ‘for conviction, the aggregate sum not to exceed $40,000.’ Under these terms there will be no pursuit by men of experience in the country. Those who know the Dalton boys, and there can be no doubt but that they were in this hold-up [sic], know they cannot be captured alive. To kill them does not comply with the terms and will not secure the reward but it will expose whoever does to prosecution in the U.S. Court in Fort Smith.”

Not invited, or perhaps declining, are outlaw stalwarts Bill Doolin, Bitter Creek Newcomb and Charley Pierce. Some believe Doolin actually does go along but drops out at the last minute because his horse comes up lame or perhaps he has a brief moment of clarity. Others speculate Bob wants all the glory for the outrageous double heist (besides, the split would be sweeter). In any case, the other members of the so-called Dalton Gang do not have long to run.

From their hideout near Tulsa, the Daltons, along with Bill Power and Dick Broadwell, headed for their historic, and disastrous, fate in Coffeyville, Kansas, where they tried to rob two banks (see Classic Gunfights Vol. I).

The only survivor, Emmett Dalton, served 14 years and lived out his life in California where he became somewhat of a celebrity. The rest of the gang met a more grisly end.