A Mind-Boggling Casa of History 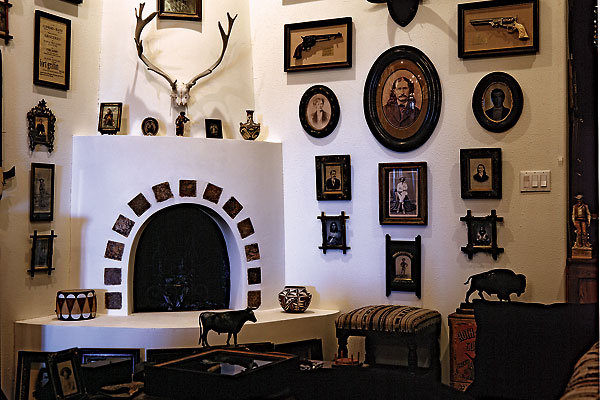 It takes a special house to hold the 8,000 books and the priceless photographs and Indian objects collected by our Emeritus Publisher Robert McCubbin.

On approach, his stucco home in Santa Fe, New Mexico, may seem unassuming, except for Bear Falls, the 12-foot-high waterfall named for a favorite pomeranian of his that died at the age of 13. But take one step inside, and you know that is not the case.

Born and raised in Stillwater, Oklahoma, McCubbin has lived in Gallup, New Mexico, Algeria and El Paso, Texas, but he says he has always wanted to live in Santa Fe. This home, which he designed, reflects his passions for the Old West and his love of the Southwest.

High ceilings in the primary living space—entry, dining room and den—with skylights above the kitchen and an east-facing breakfast room, provide plenty of natural light, while antler chandeliers add their own glow during evening hours. On the walls are a collection of Indian baskets: Hopi, Navajo, Apache and Pima. All around are copies of historic photographs of Old West outlaws and lawmen, Indian leaders, pioneer women and more, most of them displayed in antique frames McCubbin has collected while browsing antique malls. He also has a collection of Indian pottery that he started gathering many years ago when he lived in Gallup.

The walls separating kitchen from living room do not reach the ceiling, but instead they are free-standing, opening the space to the vigas that support the 14-foot-high ceiling. In designing this home McCubbin expanded features in his previous homes to draw his own rough plans, which he then had made into blueprints for his builder Cairol Parker.

This is a showcase home, in part for its unique interior spaces, in part because of McCubbin’s collections and almost certainly because of his library. Most who see this massive repository for the first time describe the transition from living area to library as “jaw-dropping.”

While they were building it, workmen joked about the library space, asking him, “You want us to put a basketball goal down on the end?” He admits that the long space “looked like a big gymnasium when it was empty.” But McCubbin had a plan—he designed a partition to be placed partway down the long space. This not only broke the room into two library areas, but it also gave added wall space so he could show more of his photography collection.

Signature elements in both rooms are the bookshelves. These are not floor-to-ceiling cases as you might see in some homes. In places they are waist high, and in other locations they are shoulder high. Both styles allow areas above them for photos, plus horns and antlers (other items McCubbin enjoys collecting). The tops of the cases serve as a shelf where he displays objects such as antique whiskey decanters, small sculptures and crocks.

“All of this stuff I take for granted now, but I had fun putting in it what I wanted,” McCubbin says. He tells us his builder became his best friend in Santa Fe, and Parker enjoys showing the home to potential new clients—in part because of the dramatic transition between living space and library. The living/dining room has French doors and French windows that allow light to stream in. Saltillo tiles present a Southwest flavor. The library has no windows and features hardwood floors. Lined with bookshelves and enhanced by the photographs and other collections, the library is warm and inviting. In one of the two library rooms is a sitting area, plus a table and chairs where Robert can read or work on his own writing projects.

The house is situated with a patio to the east off the breakfast nook, which is an appropriate place to begin the day, McCubbin says. French doors leading from the den access another patio on the south side of the house. From this vantage point he can look down a valley and see the lights of Santa Fe to the south in the evenings.

While his home has a sense of isolation, it is actually just five minutes northeast of the Plaza in downtown Santa Fe. His home currently offers three bedrooms, one a “Parlor House bedroom” decorated in Victorian style, with lots of Victorian photos and another that McCubbin intends to convert to an office. “I didn’t think I’d need an office in my retirement. I’m finding that is not the case.”

These days, McCubbin keeps himself busy as the president of the Wild West History Association, which some of you may know is the merger of the WOLA and NOLA organizations. The Association publishes a bi-monthly journal sharing scholarly articles on the history of the Old West. Come July 19-22, you’ll find McCubbin in Ruidoso, New Mexico,  hobnobbing with the members as they embark on trips to Fort Stanton and historic Lincoln, all the while discussing the latest research on the Lincoln County War and one of its most famous participants Billy the Kid.