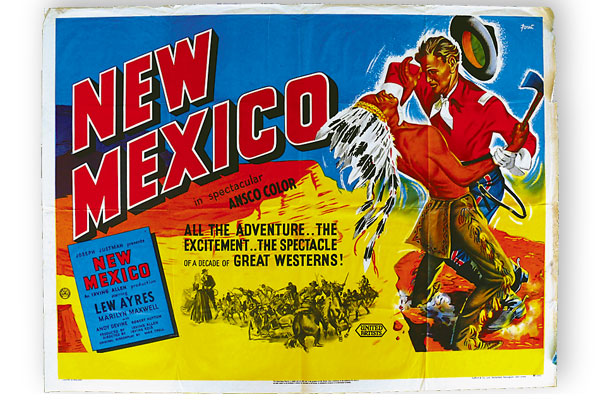 Western films offer more beyond John Ford or Sam Peckinpah. Enough already about The Searchers, High Noon, The Gunfighter and The Wild Bunch. Here are 10 movies you ought to see…if you can ever find them.

10. New Mexico (1951): While Ford tended to give us happy endings, B-movies about the cavalry could be downright depressing. Case in point is this story about a clash between Lew Ayres’ troopers (including Andy Devine and Raymond Burr, who are too fat to be horse soldiers) and Ted de Corsia’s wrongfully portrayed Pueblo Indians.

9. Six Black Horses (1962): Things go wrong for Audie Murphy and Dan Duryea when they escort Joan O’Brien across Apache country. Burt Kennedy wrote the script. At one point Richard Widmark and Anthony Quinn were to star, but Audie’s not bad, and it’s nice to see an understated Duryea (as opposed to reprising his psycho killer role, a la Winchester ’73).

6. The Secret of Convict Lake (1951): A quirky, feminist Western about escaped convicts (led by Glenn Ford and Zachary Scott) who descend upon a village full of women (including Gene Tierney and Ethel Barrymore), whose menfolk have joined the posse searching for the cons. Ford’s after revenge, Scott’s after loot, and the pitchfork scene will leave you screaming.

5. Silver Lode (1954): Rio Bravo gets credit for being the anti-High Noon, yet this is not only the antithesis of High Noon but an indictment of Joe McCarthy’s Communist witch-hunts. No wonder Karen DeWolf was blacklisted after writing this gem about badguy Dan Duryea coming to town on July 4 to bring in not-so-good-guy John Payne for murder.
4. Tomahawk (1951): For once, Jim Bridger isn’t played as a comic buffoon. He’s Van Heflin in this solid movie—sympathetic to the Indians—about the events leading up to the 1866 Fetterman battle in Wyoming. In a great scene, Heflin tells Yvonne De Carlo about the Sand Creek Massacre where his Cheyenne wife and son were killed (no matter that Bridger never had a Cheyenne wife).

2. Fort Massacre (1958): A downright savage movie about a vengeance-minded sergeant, played by Joel McCrea, who leads a cavalry detachment straight to hell. Written by film noir veteran Martin Goldsmith (Narrow Margin, Detour) with the great lines to prove it: Instructing a colleague to dig a grave, Forrest Tucker says, “Three feet will be plenty. He was only half a man.”

1. Devil’s Doorway (1950): MGM held its release to see how well 20th Century Fox’s Broken Arrow would play to audiences. Yet this is better than Broken Arrow. Robert Taylor plays Shoshoni Lance Poole, who returns home to Wyoming after winning a Medal of Honor fighting for the Union Army. Encountering racism, Poole’s forced into a fight he can’t possibly win.