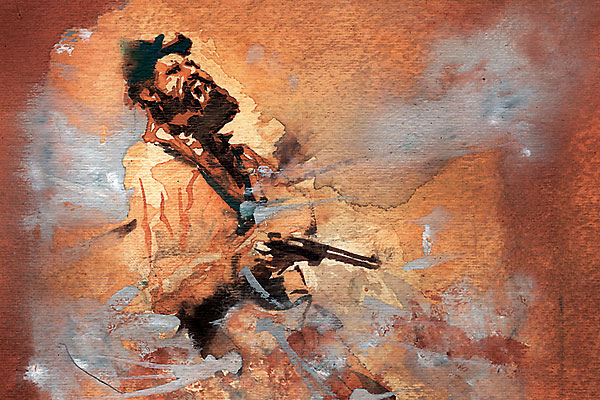 Army Surgeon John Marmaduke Whitlock is visiting his good friend Col. Kit Carson at the newly recaptured Fort Stanton (from Confederate forces). Carson is in command of five companies of New Mexico volunteers who are in the process of rebuilding the fort.

Dr. Whitlock is engaged in a game of cards in the sutler’s store when the name Capt. James “Paddy” Graydon comes up in conversation. Whitlock has nothing nice to say about the controversial Indian fighter and makes, what one eye-witness claims, “serious criticisms concerning Captain Graydon’s killing [of] sixteen [Apaches].. . .”

Alarmed at the nature of the verbal abuse, one of the card players leaves the tent and informs Capt. Graydon of the comments. Minutes later, the soldier returns with a note and pushes it in front of Whitlock, who reads it, and writes on the bottom, “Accepted.”

Whitlock says, pointing at the paper, “That is a challenge—I’ll have to fight.”

Several men in the tent try to talk Whitlock out of fighting and encourage him to slip out the back of the tent, and return to Carson’s tent. Whitlock absolutely refuses to do this. He picks up a Colt’s five-shot revolver lying on the card table and examines it. Someone comes in and says Capt. Graydon is on his way with a pistol in both hands.

Outside, Dr. Whitlock fires first, followed by Capt. Graydon. Both shots miss. Graydon retreats behind a wagon, while Whitlock crouches behind a Sibley tent. More shots are exchanged. Suddenly, Graydon clutches his chest and yells, “The son of a bitch has killed me!”

Whitlock has been wounded in his side and right hand. Lieutenant Morris, of Capt. Graydon’s company, rushes to the site with “about 75 soldiers;” they pursue the doctor and gun him down. The doctor’s body is thrown into a ditch, and Graydon’s soldiers continue firing round after round into his lifeless corpse.

When Kit Carson hears the tragic news, he goes into a towering rage.

In May of 1862, Gen. Edward Canby put Capt. James “Paddy” Graydon (sometimes erroneously written as Grayden or Grayton) in command of a company of 1st New Mexico Cavalry. In October, Brig. Gen. James Carleton, who had replaced Canby as commander of the Department of New Mexico, sent Graydon out to scout for hostile Mescalero Apaches. (This was at the time of Carleton’s notorious order to “kill all the males who resisted but save the women and children.”)

Late in October, at Gallinas Springs in the Gallinas Mountains north of Fort Stanton, Graydon encountered the aged Chief Manuelito and a small band of Mescalero Apaches on their way to Santa Fe to meet with Carleton. Graydon “lured” the Apaches into his camp, got them drunk, had his men shoot them down in cold blood and took their 17 horses with him back to Fort Stanton.

In Graydon’s official report, however, he claimed he had refused to give whiskey to Manuelito, who drew his gun and declared he would fight for it, whereupon Graydon gave the order to fire. Whatever the truth, at least 11 Apaches were killed, and twice as many wounded. Both Carleton and Col. Christopher “Kit” Carson, who had assumed command of Fort Stanton, expressed considerable annoyance but no further action was taken.

An examination of Dr. John Marmaduke Whitlock’s body found 130 gunshot wounds. In a “towering rage,” Col. Kit Carson had every man in the company disarmed, presumably with a view to have them all shot. Yet only the ringleaders were arrested and held for the civil authorities.

Four members of Capt. James “Paddy” Graydon’s company—Lt. Phillip Morris and Privates John Murry, Albert Overall and Estevan Aguilar—were charged with murder and sent to Santa Fe to stand trial. On January 1, 1863, Morris, Aguilar, Overall and three other prisoners escaped from the jail. Overall was captured the next morning, but Morris and Aguilar remained at large until January 18, when they were apprehended by Brig. Gen. James Carleton himself.

Graydon died three days after his gunfight with Whitlock and was buried at Fort Stanton. A small collection taken up by his colleagues enabled his widow Eliza to travel from Santa Fe to pay her last respects. Twenty-four years later, Graydon’s remains were moved to the Santa Fe National Cemetery.

Recommended: Fort Stanton: An Illustrated History by Lynda A. Sanchez, published by Write Designs LTD; The Life and Death of John Henry Tunstall by Frederick Nolan, published by Sunstone Press.