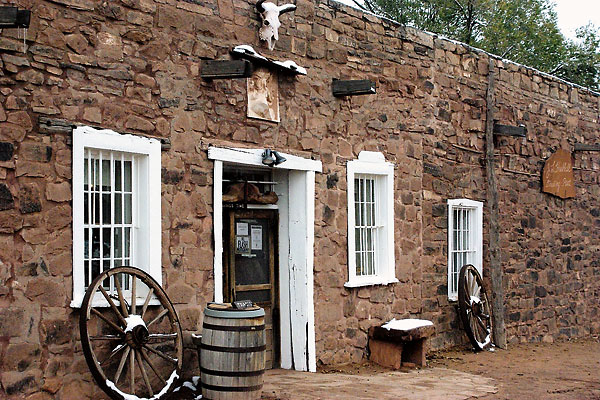 They were cultural centers, these trading posts on the Navajo reservation.

“A community place for people to meet, get their mail, maybe make a phone call if there was a phone in the area,” trader and manager Bill Malone says at Shush Yaz Trading Co. in Gallup, New Mexico.

Malone would know. Since 1961, he has traded at Lupton, Piñon, Keams Canyon and Hubbell before he came to Shush Yaz two years ago.

The first Navajo trading post was awarded to George Richardson at the despised Bosque Redondo reservation in Fort Sumner, New Mexico. In 1868, when the Navajo were allowed to return to their country in the Four Corners area, trading posts sprouted across Navajo country, often “located near water, and far from any commercial centers,” Gian Mercurio and Maxymilian L. Peschel write in The Guide to Trading Posts and Pueblos.

“Out here in this country,” trader John Lorenzo Hubbell said, “the Indian trader is everything from merchant to father confessor, justice of the peace, judge, jury, court of appeals, chief medicine man, and de facto czar of the domain over which he presides.”

“In the early days, there were over 350 trading posts on the Hopi and Navajo reservations,” retired park ranger Geno Bahe tells me at Hubbell Trading Post.

Hubbell became a National Historic Site in 1967. “About that time, a lot of trading posts were going out of business,” Bahe says. “Supermarkets were coming in, and regulations by the governments—the BIA [Bureau of Indian Affairs] and the tribes—found a lot of the posts being abandoned or closed out.”

Yet you can still find posts, some of them quite historic, on and off the rez. Even though the Federal Trading Commission has outlawed “pawn shops” on the reservation—you’ll still find them in Gallup, however—you can even, if you’re lucky, find a good deal on a rug, jewelry or maybe a can of pop.

Here’s a look at some of the best:

John Lorenzo Hubbell began trading at Ganado in 1876, and his post—established two years later—is the oldest, continuously-operated post in the Navajo Nation. Hubbell is a good place to see how a post would have looked in the 19th century (i.e. no gas pumps, though you will find a cooler for soft drinks).

Take a walk around the corrals, sheds, barn, a bunkhouse, chicken coop and guest hogan. Rangers provide guided tours of the Hubbell home, and, yes, Navajos still trade there. You can shop for rugs (Ganado Reds don’t come cheap!) and jewelry.

It’s not really a trading post; you won’t find trading posts on the Hopi Reservation. But since shops and galleries specialize in what each community is noted for, I figured we should give the Hopi their due and include them on this journey. Besides, the Hopi Cultural Center, complete with an inn and restaurant, is a good place to learn about Hopi traditions and art.

Second Mesa is known for coiled baskets and katsina dolls. FYI: No known historic tradition is behind Navajo kachinas, which were created purely to sell to tourists. Hopi katsinas (there’s no “ch” in the Hopi language) are carved from cottonwood roots. Hopis are also known for silverwork, pottery and baskets.

Located on the Little Colorado River, Cameron attracts plenty of tourists who are on their way to the Grand Canyon (it even has a hotel, lodge and RV park these days).

Established in 1916 by Hubert Richardson, these old stone buildings were the second shop on the site. “The first,” Gladwell Richardson recalled in his memoir Indian Trader, “was just a tin shack put up during construction of the bridge over the Little Colorado River in 1910-1911.” I wonder what those old traders would think of all the tourists in Cameron’s market, restaurant and gallery today. I’m not sure you’ll find any great deals, but the fry bread I ate was excellent.

Maybe the most beautiful location of any trading post, Shonto is well worth the visit. Founded in 1915 by John Wetherill and Joe Lee, Shonto (loosely translated as “spring in the sunshine”) is often frequented by Navajos who are descendants of those who escaped the “Long Walk.”

These are traditional Navajo, and much of the art you’ll find for sale is traditional.

It’s easy to see what the Gouldings—Harry and his wife “Mike”—saw when they first established this post in 1924: the same thing director John Ford saw when he turned Monument Valley into his own Western movie set. Goulding took credit for luring Hollywood to this picturesque country, helping to make John Wayne—and Monument Valley—into American icons with films such as 1939’s Stagecoach, 1949’s She Wore a Yellow Ribbon (step inside Capt. Nathan Brittles’ quarters) and 1956’s The Searchers.

It’s no longer an actual trading post, just a gift shop (no deals, that’s for certain), but the Gouldings’ original home/post has been turned into an excellent museum.

Operating since 1905, Teec Nos Pos (the name means “Cottonwoods in a Circle”) is more of a traditional trading post today, near the Four Corners (where the borders of Colorado, Arizona, New Mexico and Utah meet).

If you’re a Navajo rug aficionado, you know the name already. Teec Nos Pos weavers have been producing often large, bold and intricately designed rugs with an H-like symbol on the sides. These rugs are “very collectible,” says Larry Fulbright, rug buyer at Richardson’s Trading Company in Gallup. And quite expensive.

Stepping into this Main Street trading post—which “originated the beaded basket,” Mercurio and Peschel write—is like entering a museum. In fact, the downstairs is a museum, which opened in 1994 (the trading post dates only to 1961), housing a wide array of Indian artifacts and historic firearms.

Justin and Savannah Higgins are fourth-generation traders, and Blanco has been dealing and trading with Navajos and tourists since the 1920s, when Wilfred “Tabby” and Jim Brimhall established the post. It’s near Chaco Culture National Historical Park (well, nothing’s really near Chaco), about 25 miles south of Bloomfield, and the Indian room in the back of the post is must-see.

Tony Hillerman fans might remember Blanco. In A Thief of Time, his eighth mystery novel featuring the Navajo tribal police, anthropologist Eleanor Friedman-Bernal dropped off her mail at the post before disappearing.

Pawn shops might be illegal on the reservation, but they are a “big factor here in Gallup,” admits Malone, at Shush Yaz.

“Most of your Navajo people kinda live hand-to-mouth,” he explains. “If they need $200, they can’t go to the bank and borrow it. The banks are gonna need two weeks just to check out your credit. So they’ll end up pawning something of value—a saddle or jewelry or even a rug—something they don’t want to sell. It’s kind of a quick shot to them if they’re short on cash.”

Richardson (remember the Cameron Trading Post’s founders?) was established in 1913, and the trading post is a lot like Cortez’s Notah Dineh. Walking inside is a visceral, museum-like experience. Mercurio and Peschel call this fantastic old post, located on historic Route 66, “one of the centerpieces of trade in Gallup.”

Shush Yaz had its beginnings five generations and more than 120 years ago when Seth Benjamin Tanner led settlers from Utah to Tuba City, Arizona. The Navajo admired Tanner’s strength and called him Hosteen Shush, or Mr. Bear. His grandchildren were called Shush Yazzie, or “Little Bears.” These days, Shush Yaz prides itself as the “best source for old pawn jewelry.” You’ll find a lot more than pawn jewelry here; the post also offers Hopi katsinas, pottery, baskets and plenty of rugs and saddles.

A few years ago, Perry Null bought out Turpen’s (which dates to 1939). During my visit there, the staff was busy buying pawn from area Indians.

A Navajo rug from the 1920s hangs from the ceiling (I don’t dare ask the price, especially after admiring a Ganado Red priced at $10,725). Perry Null sells plenty of silver and turquoise jewelry, saddles, pipes, flutes and firearms. Yet the Indian crafts are not just Navajo, but also Zuni, Hopi, Acoma, Laguna and even some Apache.

The first store was built here in 1909, and it remained in operation, under various owners, until it closed in 1996. Then Navajo rug trader Mark Winter reopened the post, complete with a weaving museum, in July 1997, running the post as posts have been run for more than a century.

The Toadlena post even has a pot bellied stove! (That part of the trading post is historically known as the “bull pen,” because Indians who came to trade would huddle around the pot bellied stove.)

Speaking of Two Grey Hills, I can’t think of a better place to end this road trip than at the post that’s the namesake for one of the most famous Navajo rugs.

The post was established in 1897—it’s now a State Historical Site—and you have to be coming here to get here, as the trading post is pretty remote.

You have to ask to visit the rug room. But don’t ask which of the hills—I count more than two, and nary a one of them grey—are the post’s namesake hills. That’s a mystery even Tony Hillerman couldn’t solve.