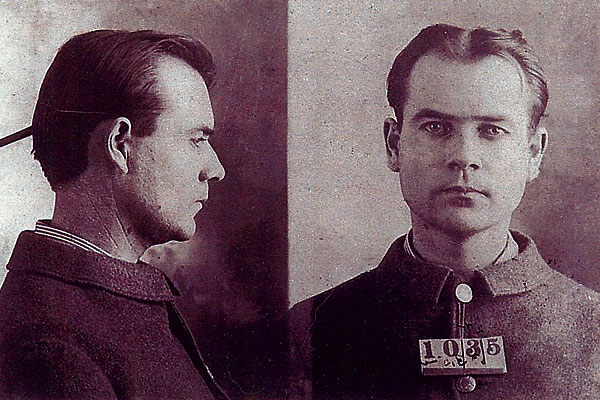 I must confess that investigating history (the process, not the column) can be a big undertaking—but sometimes it’s a simple matter of asking a question.

Case in point: Ben Kilpatrick, alias the Tall Texan, who rode with Butch Cassidy and the Wild Bunch around the turn of the 20th century.

Back in January, several of us were involved in an e-mail discussion about tall guys in the Old West. On the outlaw side, the first name that came to my mind was Ben Kilpatrick. I mean, his nickname seems to show that, doesn’t it?  Or does it…?

First off, a little background. Ben Kilpatrick was born just east of San Angelo, Texas, in 1874. Neighbors considered him and at least a couple of his brothers (there were six Kilpatrick boys and three girls) to be troublemakers, allegedly robbing local sheep camps while still in their teens. By 1897, Ben left Texas and hooked up with some real hardcases like Sam and Tom “Black Jack” Ketchum, future Wild Bunch rider Will Carver and, eventually, Butch Cassidy and company.

Ben was involved in several shootings and robberies, including a train holdup near Wagner, Montana, in July 1901. That November, he and girlfriend Laura Bullion were arrested in St. Louis as they tried to pass bank notes stolen at Wagner. Both were convicted. He got 15 years of hard time; she got five.

Kilpatrick was released in 1911 and promptly went back to the outlaw trail. His string ran out in March 1912 when he and partner H.O. Beck were killed during a failed West Texas train robbery.

Now back to that nickname. Wild Bunch researcher Dan Buck told me to hold on—Kilpatrick wasn’t that tall. So I reached out to Arthur Soule, Ben’s biographer, who said that Ben was measured at six feet one inches when he was arrested in St. Louis in 1901. But five years later, officials at the Atlanta penitentiary, where Ben was doing time, put him at roughly five feet eleven.  Soule isn’t sure how the two numbers could be that far off. He tends to believe the prison figure is the more accurate.

But in either case, the outlaw wasn’t that tall. Sure, he was bigger than Butch Cassidy, who was five feet nine. Or Kid Curry, who topped out at around five feet seven. And it’s true a six-footer at that time was taller than average. But Kilpatrick was a runt compared to Pat Garret (six feet four) or Arizona lawman Bob Paul (six feet seven).

Somebody must have been thinking bigger than life when it came to Ben.  Just which somebody tagged Kilpatrick as the Tall Texan isn’t clear.

It may have been St. Louis Police Chief William Desmond. Dan Buck went through old periodicals covering most of Kilpatrick’s lifetime. His discovery: Desmond was quoted in a November 14, 1901, wire service story as saying, “‘A tall Texan’ answering the suspect’s description was implicated in several train and bank robberies in the west and was known as Kilpatrick.”

Granted, other early newspaper stories called Kilpatrick the “Lone Texan.” But by 1902, things seem to have firmed up. The Anaconda Standard referred to “Ben Kilpatrick, ‘the Tall Texan.’” In 1903, a Chicago Tribune story quoted the Pinkertons regarding the “Tall Texan.”

The Pinkertons were probably the source for James D. Horan’s 1949 book Desperate Men. It’s based mostly on agency files—and Horan consistently calls Kilpatrick the “Tall Texan.” As far as Dan Buck can tell, that’s the first time a book used the handle.

So there you go. I suspect that Messrs. Buck and Soule will continue investigating the intrigue that is the Wild Bunch. Who knows what might crop up. But ain’t it interesting just what will set off an investigation of history?

For more reading, check out Arthur Soule’s The Tall Texan: The Story of Ben Kilpatrick. Soule is also preparing a documentary on the outlaw, and he plans to write an updated biography of Kilpatrick.