Breaking Broncs with the Bow-Gun Boys 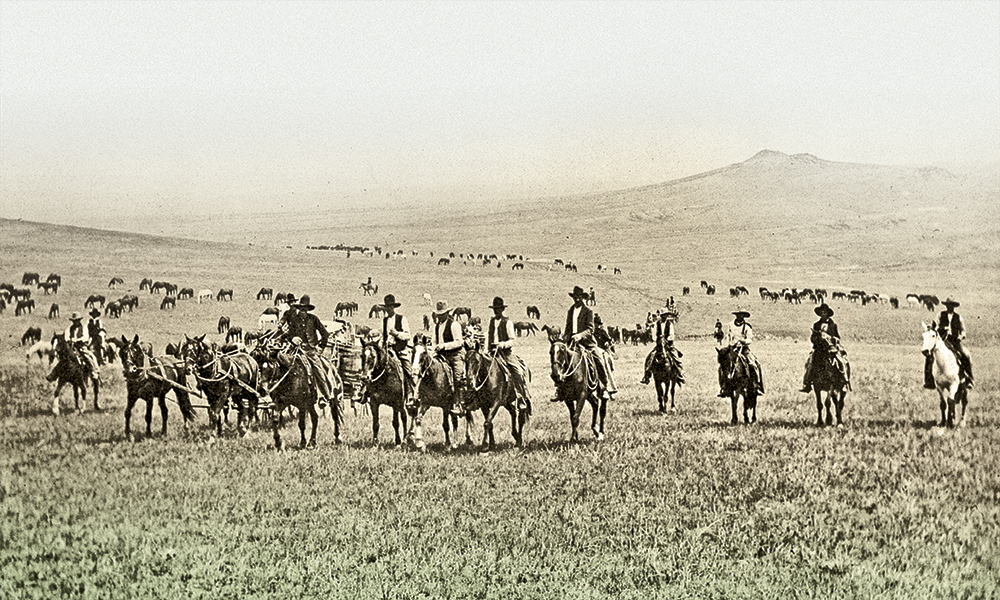 Around 1885, George “Dick” Ingersoll helped drive a herd of longhorns from Texas to Montana Territory and settled in the Miles City area. Along Sunday Creek, he built up his Bow-Gun Ranch, the cow camp where famed Miles City photographer L.A. Huffman found himself at the turn of the 20th century. In both photographs and words, Huffman documented “The Last Busting at the Bow-Gun,” as he called his July 1907 article for Scribner’s Magazine.

“…one raw windy September evening [1904] I pulled up at the Bow-Gun, one of the old-time cow camps of the north country, built nearly twenty-five years back, and now sadly fallen to dilapidation and decay,” he wrote.

“I had come twenty miles to see ‘broncs busted’ by new methods; and I thought, as I unhitched, of the Bow-Gun boys of a far time, and harked back to the days when the environs of Milestown—aye, its main thoroughfare withal—was the daily chosen arena for the busters of those times, when a hand rode out his string whenever or wherever it was dealt to him, and was of the sort that resented the appellation ‘Horse Fighter’ or ‘Buster.’ He was born to the saddle and lariat, as farmer lads are born to the milking pens and the furrows.”

He added: “But times have changed. There’s little doing in bearskin shaps [sic]. Fewer men are drawing fifty a month, making up in hat rim what they lack in skill and brains. And here was the old Bow-Gun almost at the end of it, soon to become a third-rate sheep camp.”

The first horse to be broken was one named after the famous Irish playwright. Let’s follow Huffman’s experience of the ranch’s “last bucking” in his photographs.

The crew awoke to a voice yelling, “Roll out, Roll out, while she’s hot,” photographer L.A. Huffman recalled. The cook had steak, stacks of griddle cakes and coffee.

After breakfast, foreman Bob asked Warren how many horses he wanted the boys to run in for him. Warren replied six would do.

“He’d have six, not more, raw onion-eyed, four- and five-year olds, for his first morning’s work…and six horses, mind you, that had never smelled oats or felt weight of rawhide since they had had that Bow-Gun signal burned on their shoulders, some terrible day of their colthood,” Huffman wrote.

Lee Warren, the buster (on the right), next to his hazer, is ready to go break his broncs. Huffman described Warren’s outfit in his article for Scribner’s Magazine: “Just a plain, ordinary, single-rigged cow-saddle, bridle, and lariat, spurs, quirt, and some short pieces of grass rope for the cross-hobbling.”

Warren, as he looks them over with critical eye, uncoils the rawhide, adjusts hondo and loop. At his first step of approach they break away,” Huffman wrote. “Round and round they circle, in vain effort to dodge that flying noose, which, at the second cast, falls true, and the bright bay leader of the bunch, Oscar Wilde (a name that Warren flung to him with the first throw that he so neatly dodged, and Oscar he will be to the end of his days in the Bow-Gun saddle bunch) is in the toils, leaping, bucking, striking savagely at the thing that grips him by the throat, now held taut by Lee and his two helpers, who, when his first desperate lunges are past, take a turn of the rope round the snubbing-post set deep in the earth.” 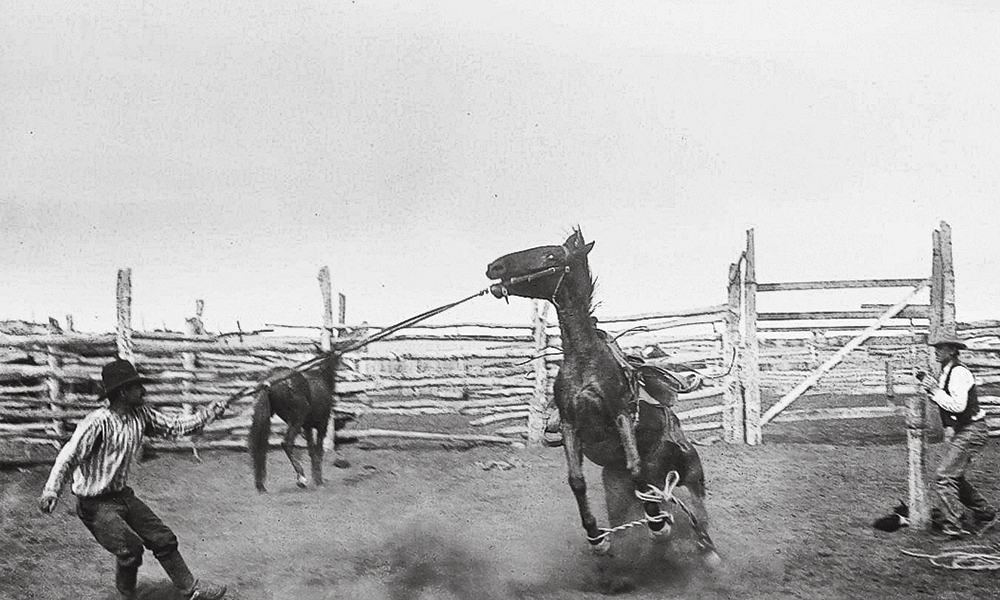 “For a full half-minute Oscar has found that dust-laden air so good that he has relaxed, forgotten to fight,” Huffman wrote. “Deftly and quickly Warren hobbles his front feet together and slips on the bridle. Oscar bounds to his feet, but quickly finds that his struggles to free himself only result in a succession of falls that cause him to hesitate, until, in some mysterious way, he finds his near hind foot, too, caught in a noose and made fast to his near front one. He’s cross-hobbled now and ready for the saddle.” 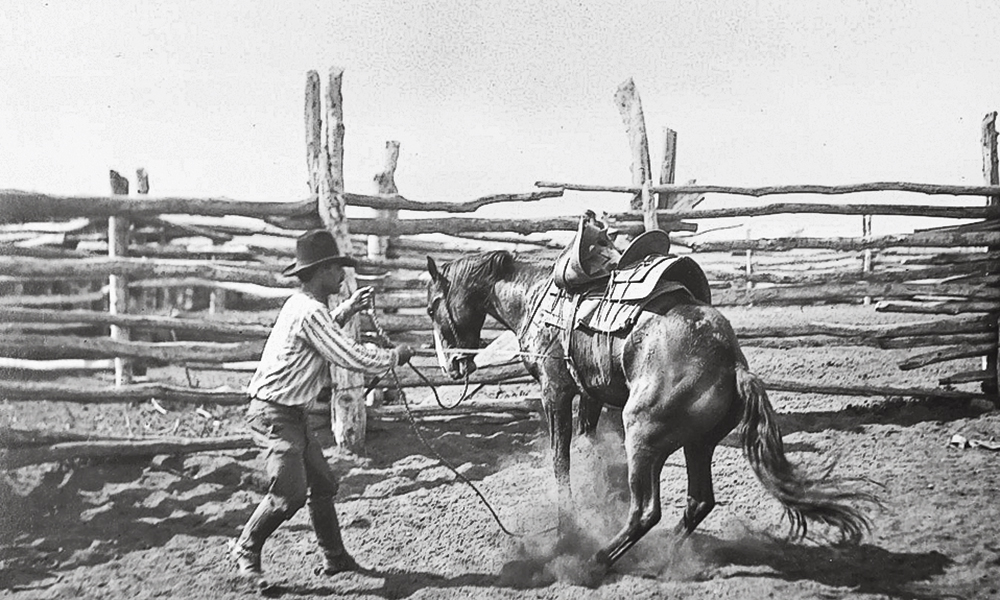 “Here the skill and patience of the bronco rider are put to a severe test. He must hold his horse by the reins and rope, lay the saddle blanket, then with a one-hand swing place that forty-pound saddle where it belongs.” 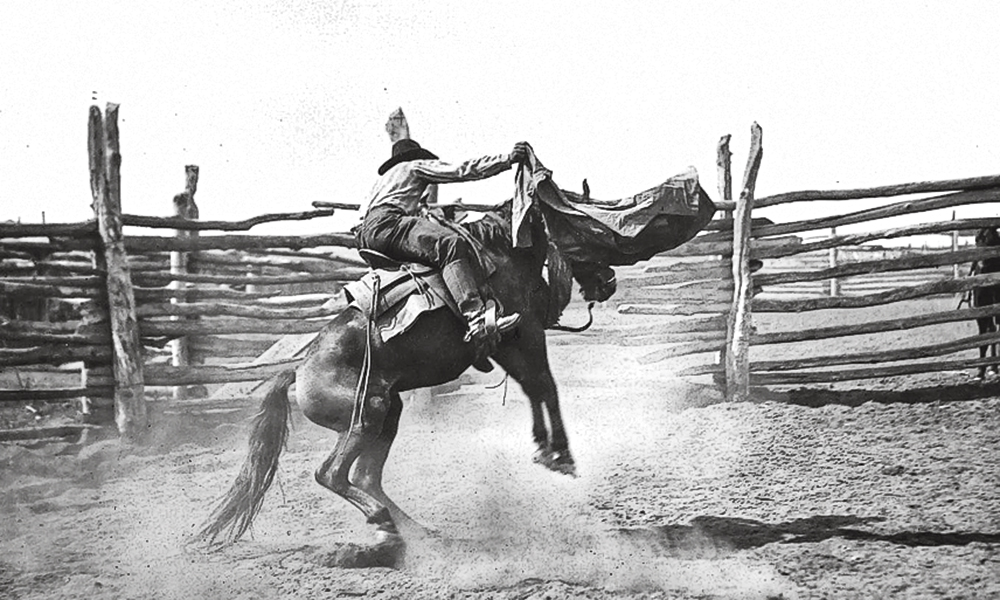 Cautiously, tensely, without the shadow of hesitation, Warren lightly swings to his seat. The critical moment has come…. In response to the first pull at the rein, by one or two quick, short, nervous steps [Oscar] discovers that his legs are once more unshackled. Up he goes in a long, curving leap like a buck. Down goes his head, and he blats that indescribable bawl that only thoroughly maddened, terrified broncos can fetch, something uncanny, something between a scream and a groan, that rasps the nerves and starts the chill, hunted feeling working your spine.”

Then, Huffman added, after repeated flicks of the stinging rawhide quirt and the digging in of steel spurs on Oscar’s flank, “…the horse chooses doing the circle, the thing of the least punishment.” 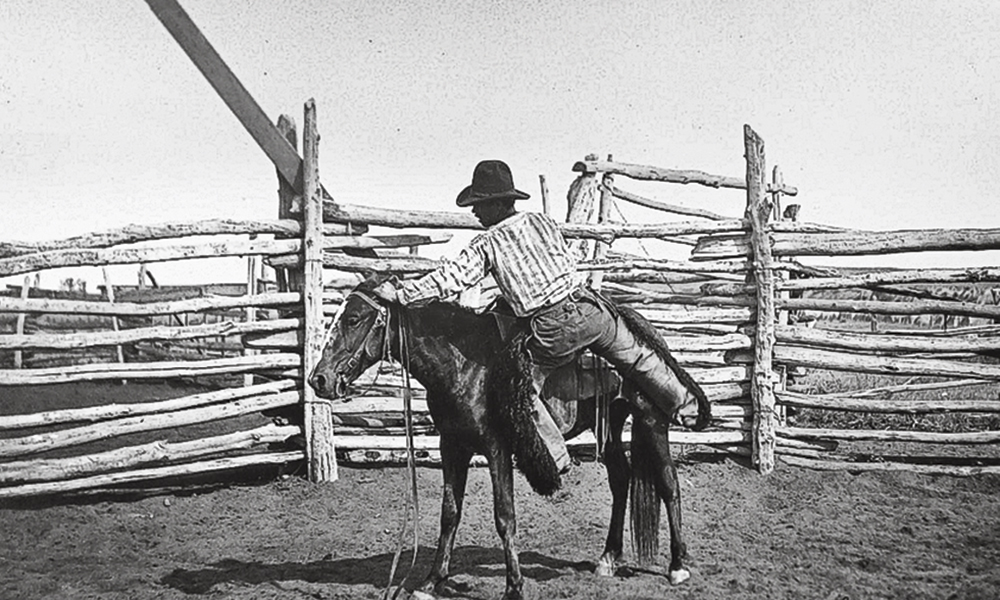 After Warren mounted and remounted Oscar half a dozen times, Oscar’s first lesson was finished. Warren moved on to the next horse…and the next…and the next—until he rode his last bronc for the Bow-Gun.