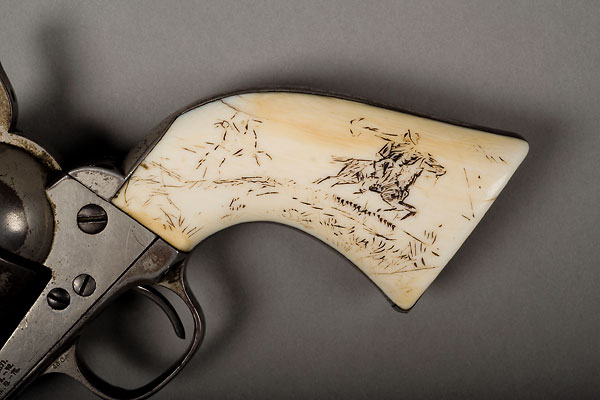 For Charlie Russell’s funeral on October 27, 1926, a pistol and rig, along with his chaps, were draped over Dexter, the cowboy artist’s favorite horse.

That nickel-plated Colt revolver and double loop holster are among the many treasures in the Charles M. Russell Research Collection, acquired last October by the Gilcrease Museum in Tulsa, Oklahoma.

The collection consists of more than 13,000 letters, photographs and objects either made or owned by Russell. Photographs of Russell with family and friends range from him with cowboys and local acquaintances to celebrities such as Douglas Fairbanks, Mary Pickford and Will Rogers.

Three photographs have been found in the archive showing Charlie wearing what appears to be his Colt in the double loop holster. Only one of the photos has an associated date. The bull’s head ivory grip on the pistol and some of the details of the holster can be seen in the photos. These images provide strong evidence that the gun was Russell’s personal sidearm, but they don’t tell us when he acquired it.

We do have the factory records from the Colt Manufacturing Company. According to the serial # 57698, the .44-40 caliber revolver was shipped to Hartley & Graham on July 24, 1880, writes Colt archivist Beverly Jean Haynes. She also notes that the trigger guard and back strap have another serial number (90554) that denotes a .45 caliber revolver, which was shipped to the same company on June 14, 1883.  An incomplete serial number (7698) is stamped on the cylinder. On the left side of the barrel, “Frontier Six Shooter” can still be seen.

When it was new, the ivory-gripped, nickel-plated pistol would have been an expensive item for a young cowboy and artist, not yet famous in 1883. In at least eight of Russell’s paintings, a figure (sometimes Charlie, himself) is depicted with a nickel-plated pistol with white grips and a double loop holster. Of the paintings depicting the pistol and double loop holster, the earliest, Casa Alegre, was finished in 1890, just seven years after the shipping date of the .45 caliber to Hartley & Graham.

In two of his paintings, 1899’s The Hold-Up and 1912’s The Camp Cook’s Troubles, the careful observer can see that Russell skillfully painted a bull’s head ivory grip on the pistol. Amazing detail for an image that is only a few millimeters in length!

The art matches the real deal. On one side of the white ivory grips, Russell carved a short poem, probably based on a famous set of lines attributed to Sam Colt, about his gun being an “equalizer” among men. Beneath that, Russell not only carved a bull’s head but even flowers under the bull’s nose. Perhaps he was suggesting that the bull find time to stop and smell the flowers. Anyone who knows Russell’s paintings, illustrated letters or irreverent sculptures knows that he had a great sense of humor. On the opposite grip, Russell etched a chase scene depicting a cowboy shooting his pistol at a pursuing Indian warrior.

Russell also attempted to engrave his hallmark buffalo on the frame of the gun, but he completed only a portion of the outline. Perhaps engraving steel may have been too difficult for the tool that he had at hand. Later in his life, however, he did engrave some animal figures, including his signature bison skull, into the steel magazine of a model 1895, .35-caliber Winchester lever action rifle that belonged to his friend, Frank Bird Linderman. He also embellished his own rifle, now in the collection of the Amon Carter Museum in Fort Worth, Texas, but currently on loan to the C.M. Russell Museum in Great Falls, Montana.

With all of its scratches and worn spots, the nickel-plated Colt revolver not only is an artistic specimen in itself, but it also provides a tangible connection to Charlie Russell, the cowboy and artist who created the iconic images of the Old West.

Robert B. Pickering is the senior curator at the Gilcrease Museum and the director of the Museum Science and Management degree program at Tulsa University. Formerly, he served as deputy director at the Buffalo Bill Historical Center.