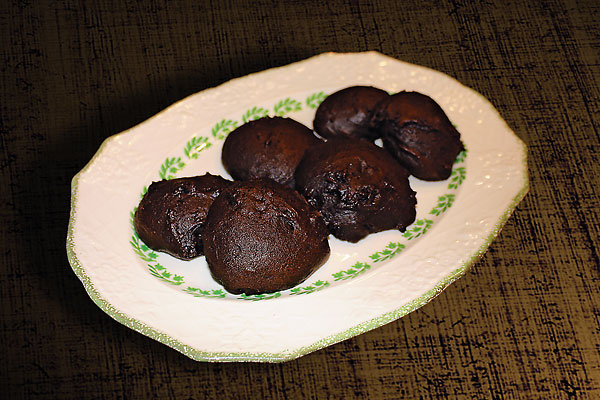 “Ours was a high classed outfit and we would treat even a tenderfoot right until he got smart.

“We wouldn’t tolerate any smart alecs in our bunch. We got one such number from Virginia once, so one day he got drunk and we poured sorghum molasses all over him, from the top of his high silk hat, to the toe of his highly polished boots. When he sobered up enough to realize his predicament, he made for the creek and we never saw him again,” recalled San Angelo, Texas, cowhand J.F. “Red Horse” Henderson in the late 1800s.

Beyond its use for practical jokes and life lessons, molasses was used for a multitude of purposes, including as a medicine for coughs, blood purification or other ailments. In March 1886 a Grand Forks, Dakota Territory, man entered a saloon hoping to get a remedy for his cough. He said to the bartender, “Gimme rum and molasses.” To which the bartender replied, “Sorry, sir, but we haven’t a bit of molasses.” The coughing man remarked, “Well, I’ve got to do something to stop this terrible cough. Gimme the rum without the molasses.”

Trail pioneers often traveled with molasses, instead of sugar, since it had so many uses. Too much of the trail sometimes proved messy because of the fermenting properties of molasses; sometimes it oozed, bubbled or exploded. The Germans took advantage of this tendency, and on June 25, 1889, the New Mexico Mesilla Valley Democrat reported that Germany had created a new explosive that was three times more powerful than nitroglycerine. It was made from molasses and was called Petargit.

Molasses was also a highly traded commodity on the 1880s New Orleans and Havana markets, was used in many colorful sayings and, in 1883, became the trendy new color for the fall. That year, the Austin Texas Siftings reported the fashionable “crushed strawberry” color that was once trendy had been replaced by the new “spilled molasses.”

While spilled molasses may have been the new color for 1883, spilled molasses in Terrell, Texas, in 1889 proved quite messy. On August 24 a horse team ran away with a wagon and a poor soul only identified as Frances. During the melee, a barrel of molasses rolled from the wagon, emptying its contents all over the sidewalk. It also “painted” the Star newspaper’s office with the 1883 fashionable color of “spilled molasses.”

Since sugar and syrup were hard to come by in remote and early frontier towns, molasses served as their substitute. Folks grew sorghum cane and took it to a nearby distiller who turned it into molasses. General stores sold molasses in barrels to customers who brought their jugs in to be filled up. This thick, gooey substance topped cornbread, mush and pancakes, and was also used in various recipes including candy, cakes, cookies, breads and baked beans. Have fun making the yummy 1880 ginger snaps, which are more like molasses cookies!

Heat the butter and water in a small saucepan over low heat until the butter melts. Place the molasses and sugar in a large mixing bowl. Add the soda and ginger, and blend well. Slowly pour the water and butter into the bowl of molasses, and stir until well blended.

Add three cups of flour and stir to combine. Add the remaining flour in half-cup increments until the dough is stiff enough to drop onto a cookie sheet. Note: The dough will thicken after it sits for a minute or two.

Grease a cookie sheet and drop the dough by teaspoon or tablespoon, depending upon the size cookie you desire. Bake at 325°F for about 13 minutes. Check with a toothpick. Place on wax paper or cookie racks.

*Altitude and weather affect baking time and the amount of liquid and flour.