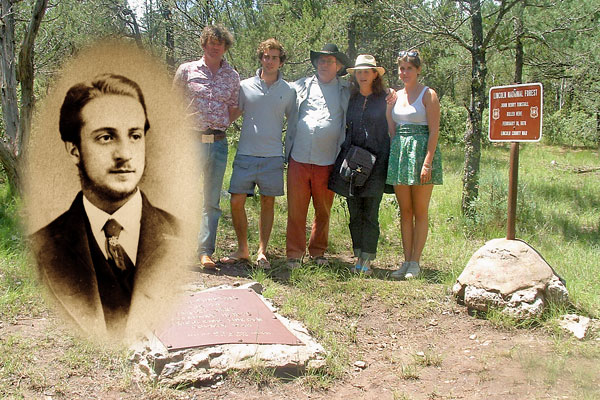 You could call the visit a “belated family reunion.”

Five members of a proper English family gathered in a New Mexico canyon in July 2010 on an oppressively hot day, quite unlike the 70-ish summer climate of the United Kingdom. The visitors were uncomfortable, but not just from the heat. They were here to see where one of their kinsmen was murdered in cold blood.

Englishman John Henry Tunstall came to New Mexico Territory in 1876, seeking his fortune. He ran his cattle ranch on the Rio Feliz, some 30 miles from Lincoln, and established his mercantile store and bank in town. But he ran afoul of the powers that be—Irishmen by the name of Murphy, Dolan and Riley, who controlled mercantile and banking interests in Lincoln County. They were not about to brook competition.

Things came to a head on February 18, 1878. Tunstall and four of his employees—including one “Kid” Antrim, later known as Billy the Kid—were about 10 miles southeast of Lincoln and heading toward town. A large posse sent by Sheriff William Brady, a Murphy-Dolan-Riley ally, approached them, supposedly to seize some horses. The four Tunstall men sought shelter in the rocks. Their boss met the lawmen head on. One member of the posse shot him in the chest, knocking him to the ground. Another posseman took Tunstall’s own gun and shot him in the back of the head, killing him.

The killers claimed self-defense, that Tunstall had fired at them first. Nobody believed it, but nobody was convicted of the crime either. His murder did fuel the start of the Lincoln County War.

Tunstall’s body was buried, without a marker, in a lot just east of his store in Lincoln. Over time, the exact location of his grave has been lost.

But his family back in England never forgot John Henry and how he died.
For more than 130 years, his descendants have honored their memories of him, keeping his letters and journals and documents.

On two occasions, Tunstalls have made the pilgrimage to New Mexico to see the locales where their ancestor lived and died.

For Hilary Tunstall-Behrens, the great-nephew of John Henry, this was his second trip to Lincoln; the first came in 1974. This time, he brought along his wife, two grown children and a nephew. At 82, he feels this might be his last visit, and he was determined to pass on this part of his family’s history to the younger generation.

The group walked the streets of Lincoln. They visited the Tunstall store, which is virtually unchanged from 1878. They saw the approximate location of their ancestor’s grave. They drove to the location of Tunstall’s 3,200-acre spread, now known as the Flying H Ranch.

They also made their way to Tunstall Canyon, a remote spot in the mountains where the Englishman was shot down. Getting there is tough (a four-wheel drive is recommended), and once you’re in the canyon, the “death spot” is even tougher to find. You’ve got to locate a couple of tree stumps on which red arrows have been painted.

As the Tunstall group stood at the clearing where John Henry bit the dust,  Nolan shared aloud the story of the young Englishman. “Somber. Very moving. Emotional,” is how Hilary described the moment. Tears were shed. Even today—after reading all the books and talking with experts—the family can’t understand why John Henry was murdered. That type of crime just would not have happened in England.

The family noted a certain irony: John Henry came to New Mexico seeking fame and fortune; he did become well-known, because of his death.

Hilary left Lincoln County satisfied he had accomplished his goal. His children and nephew vowed to keep alive the memory of a long dead relative, and to bring their own children to this spot. Future visits won’t be comfortable, any more than this visit was for the family. But they’re determined to honor their family heritage and the brief life of John Henry Tunstall.