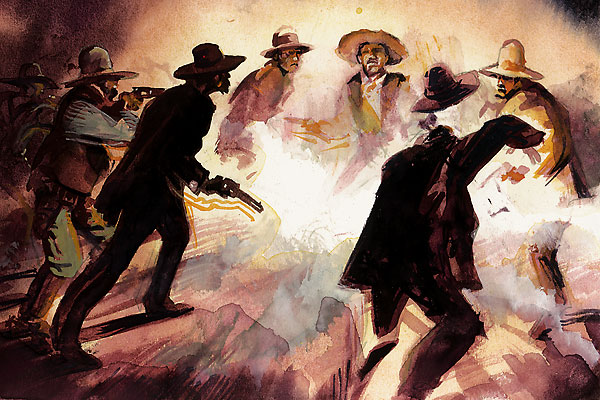 The cowboy shoots the unarmed Baca’s hat off. Baca leaves to recruit some fellow New Mexicans, who help him arrest McCarty, when they catch up to him on a nearby ranch road. McCarty is put under guard at a private residence in Middle Plaza (probably Deputy Sheriff Pedro Sarracino’s home).

Within a short time, a large number of Slaughter Ranch cowboys show up, led by ranch foreman Young Parham. They are “miffed at the insulting treatment of one of their own,” and they demand McCarty’s immediate release.

As Baca tries to negotiate, his prisoner quickly grabs a pistol from Parham’s scabbard and shoots at Baca once again. At this point, Baca informs the would-be liberators there will be no bail. Reluctantly, the cowboys retreat back to Upper Plaza and Milligan’s liquor emporium.

Returning some three hours later, and this time led by saloonkeeper William Riley Milligan (ironic, because Milligan requested McCarty’s arrest in the first place), the cowboys once again demand McCarty’s freedom. Baca stands firm, but the crowd is quite aggressive, especially the inebriated Milligan. Feeling threatened, Baca draws his pistol and fires a bullet into the ground for effect.

Milligan scoffs, “You are a bad shot; you didn’t hit me.”

Baca tells them to get out. Milligan and crew leave, going toward their hitched horses. Yet when the tipsy barkeep mounts his horse, he dismounts and walks back to Baca, saying, “The devil may take me if I don’t get Charlie McCarty out.”

Exasperated, Baca informs the mob he will count to three, and if they don’t vacate, he and his guards will open fire. At this point, both sides draw their weapons.

“One, two . . . three!” says Baca, making good on his threat. Baca orders the “guards to fire, and the two discharges [go] off about the same time—their fire and our fire.”

Chloride’s Black Range newspaper reports Baca’s forces open fire “from a dozen or more guns which [constitute] Baca’s guard,” adding, “the range [is] short the shots not less than fifty.”

In the exchange of shots, Parham is crushed when the horse he is riding is hit by gunfire and falls on top of him. Parham lives through the night, but he dies the next day from his injuries. Another casualty is Tabe Allen, a cowboy who takes a ball in the knee.

Once again, the cowboys gather up their wounded and retreat to Upper Plaza.

During the next 24 hours, cowboy couriers swiftly ride to cattle ranches in the vicinity, claiming the Mexicans at the plazas have “gone on the warpath,” killing four or five men, and are threatening to kill all Americans in the area. The alarmed cowboys saddle up and head to the scene of the supposed conflict.

After a hasty trial, McCarty is dismissed with a $5 fine. But the crowd grows ugly and turns on Baca. He retreats to a nearby jacal, where he fires through the door at the angry mob, killing Bert Hearne. A siege begins.

After an attempt to burn Baca out fails, a truce is called. Baca surrenders and is taken to the county seat.

Was Elfego Baca a Deputy Sheriff at the Time of the Fighting?

At his trial in Albuquerque, Baca’s lawyers produce an affidavit that shows Baca was issued a deputy sheriff’s commission by Socorro County Sheriff Pedro Simpson on October 26, 1884 (two days before the trouble in Frisco). This document is hotly contested as being created after Baca’s arrest and backdated to help give his actions the veil of authority. In later years, Baca maintains he was “self-appointed.”

Even if Baca had no official badge at the time of the gunfight, his bold actions against such overwhelming odds are still amazing.

Baca later explained how he survived the two-day fusillade: “It was only by lying on the floor,” Baca said, “which was a foot or more below the level of the ground, that I escaped being hit.”

Baca claimed the door of the jacal in Frisco was produced as evidence at his trial (it contained 367 bullet holes), along with a broom that had eight bullet holes in the handle.

The cowboys assumed they had to talk to Baca in Spanish, but, ironically, it was his second language. He had been schooled in Topeka, Kansas, and was not fluent in his native language at the time of the fight.

Charlie McCarty lived a quiet life around Reserve, New Mexico, until his death at 77 in 1939. His granddaughter claimed he never talked about the gunfight or its causes. As of July 2010, his grandson, also named Charlie McCarty, runs a ranch and hardware store just north of Reserve. He talks about his granddad and Baca in the introduction of his 2010 book Trouble in a Green Pickup.

Baca was so impressed with the attorneys who defended him, he decided to become a lawyer. In 1919, he was elected sheriff of Socorro County and served one term. In 1940, the City of Socorro honored Baca with the key and door to the jail cell he had occupied in 1884. Baca died in 1945 at age 80.

On May 24, 2008, a life-sized statue of Baca, sculpted by Sedona, Arizona-based artist James Muir, was dedicated at the Upper Plaza in Reserve.