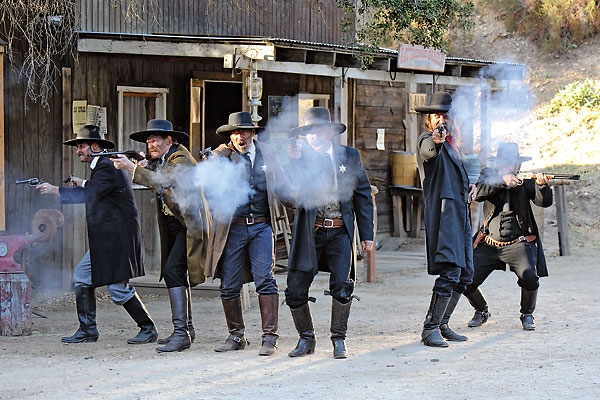 Benelli USA wanted the characters, location and props in its latest Uberti ads, online catalog and videos to have an authentic Old West look and feel that would not only fit its frontier replica firearms, but also create an exciting atmosphere of Western outdoors adventure.

Yours truly was pleased to be brought on board to serve as the historical consultant for the project. Benelli hired me to ensure its Uberti campaign spoke directly to Old West historical firearms buffs and re-enactors.

Lee Thomas Kjos, a topnotch outdoor photographer, originally planned to shoot the campaign in Arizona. Yet when he realized that I was “dialed in” with people, places and animals in the southern California area, the game plan was moved to my home range.

Kjos wanted to photograph several hombres who had that “lean and mean” look of the Old West, but also could convincingly act out the scenes for his cameras. A colorful cast was assembled from several of my amigos who had played roles in various productions, including History Channel documentaries, and those I knew could be counted on to perform the roles accurately. These folks were Larry Brady, Al P. Bringas, Eric H. Heisner, Brent Hudspeth and Wyatt McCrea (grandson of Joel McCrea, the actor who starred in numerous Westerns, including Peckinpah’s 1962 film Ride the High Country).

Jay T. and Maria Rockwell, of Hollywood Trick Horses, brought in three of their horses. One of them, Butch Cassidy, a beautiful rearing buckskin that entertained at the Universal Studios tours for years, had been the double for the lead horse Cisco in Kevin Costner’s 1990 multi-Oscar-winning film Dances With Wolves. (Butch Cassidy was used in the scene where the adolescent Indian braves try to steal Cisco, only to get bucked off.)

Al Frisch, of Hollywood Guns & Props, supplied the location, period gunleather and other props. Al and I have worked together on a number of film and TV productions; we can almost read each other’s mind when it comes to proper gear for certain scenes, firearms safety and other important aspects of filmmaking. Frisch is well known for supplying authentic gear, along with a great-looking Western town set.

Frisch’s partner, the cinematographer and director Stephen McCurry, even volunteered to lend a hand. Under McCurry’s able assistance and the guidance of Stephen McKelvain, Benelli’s vice president of Marketing & Communications, the cast and crew shot the still photos and video scenarios for the 2010 campaign.