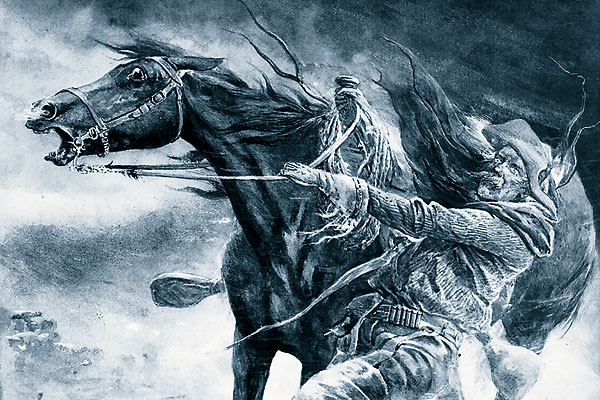 In mid-January, the high country was covered with snow, three feet in places.

Frontier docs like Elijah Baines had seen similar cases, but not as sad as this one. Before him sat the 68-year-old trapper, loudly breathing, while waiting in anticipation for the Doc’s diagnosis. “Ol’ Scratch,” they called him. No one, not even “Scratch” knew why.

Doc Baines had been asked to come to Scratch’s cabin, about 12 miles from town, after his neighbor, Caleb, happened by, saw the corral gate open and Scratch’s only horse gone. Upon entering the house, Caleb had found Scratch lying on his straw-filled bed, somewhat delirious, claiming he was blind. He was shivering a bit, even with his coat on; and he needed water badly. Caleb built him a fire, gave him some jerky with water and then headed for help. Caleb took nearly 12 hours traveling in the deep snow to make it to town and to return Doc Baines to Scratch’s cabin.

Noticing the snow-shoes, hat and mittens on the floor, Doc Baines brought the lantern up close to the old man’s eyes. He could tell they were blue; but the haziness of the corneas obscured the depth and purity they once possessed. Poor Scratch winced at the bright light. Doc Baines could see the inflamed conjunctiva (tissue membrane) covering the sclera (the white part of the eye). Tears in buckets started to roll down the old man’s cheeks.

Old Scratch told Doc Baines that he had barely made it home the day before. He had been out on the snow checking his trap lines that ran about four miles from the cabin. His mistake, he said, was to follow some elk tracks another mile or two. The sun was bright in that crystal, clear Colorado sky. Scratch had lost his leather facemask, fitted with eye slits to cut the sun’s glare. He didn’t have the material with him to make another. Crossing the open treeless plateau for many miles, Scratch caught that solar glare full bore, for hours at a time.

Doc Baines knew the diagnosis immediately. The poor trapper had gone “snow blind.” To make matters worse, Doc discovered an even bigger problem, a debilitating consequence (perhaps) of previous exposures. An ugly tissue growth had advanced over the surface of Scratch’s conjunctiva and had begun to obscure his corneas (the transparent, central part of the eye) in both eyes.

Today Scratch’s acute condition, “snow blindness” is called ultraviolet (UV) kerato-conjunctivitis (inflammation of the cornea and the conjunctivia [the membrane that covers the white part of the eye or the sclera]). Ultraviolet light from the sun can damage the eye by direct, scattered or reflected exposures. The latter two mechanisms of exposure often occur when bright sunlight hits snow, especially at high altitude.

The debatably, UV-induced tissue growth observed by Doc Baines is called a pterygium, a non-cancerous, superficially invasive, cloudy mem-brane that can cover the cornea in extreme cases and interfere with vision. A patient afflicted with the combination of problems described by Doc Baines will suffer decreased vision both from the “sunburn” of the cornea (snow blindness) and from the interference of light transmission caused by an advanced pterygium that obscures the visual pathway.

Doc Baines knew that Scratch would mostly recover from his snow-blindness; but understood that the removal of the pterygium was beyond his skill level.

Doc Baines left Scratch with his neighbor, Caleb, instructing him to keep the old-timer comfortable by placing cold compresses on his eyes and keeping him in a darkened room for a day or two. Sadly, this advice was all that the Doc could or was inclined to offer. Scratch’s days of independent living were now over.

Doc did not think too long about referring Scratch to Denver for some costly, risky surgery that could leave the old man totally blind. Nitric acid placed on the offending tissue or a shaky hand with a very sharp scissors could have worsened Scratch’s fate.

Would that Polaroid sunglasses have been around for poor Old Scratch when he first ventured into those Rocky Mountains, as a young man!