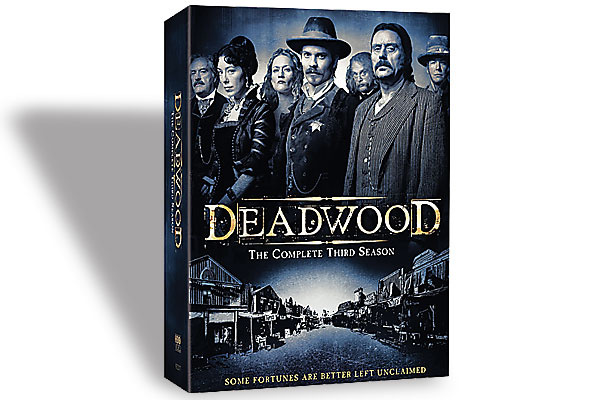 Like The Winning of Barbara Worth, Deadwood tells the story of a community on the edge of the world, a couple of bad breaks away from extinction, in the hands of visionaries and complete bastards, which are by no means mutually exclusive.

As the final season rolled to a close, the show suddenly stopped being about a group of semi-comic figures locked between collision and collusion, and instead became a touching portrait of soiled souls bonding together while an insane giant—George Hearst—trampled through their lives.

The promise of Deadwood was that the audience would distinguish the good monsters from the bad ones. Its citizens were a Thimble Theater of lovable grotesques; their language, a combination of bible, Shakespeare, Victorian English and undiluted Barnacle Bill the Sailor. But for all that, they are completely inarticulate in matters of the soul. Only Hearst and hunger unites them.

Al Swearengen (Ian McShane), the fault-riddled gut bucket entrepreneur, was Deadwood’s secret architect. And Swearengen was always a self portrait of David Milch. The director likes to bear his soul; he’s a canny exhibitionist, but Milch is also the entire town, excepting Hearst.

The final season features 12 episodes, but the series could have just as easily ended with episode nine, “Amateur Night.” Swearengen closes the show alone, in his bar, singing “The Unfortunate Rake,” a sad lament about a man dying of syphilis, which eventually evolved into “The Streets of Laredo.” It’s like something from a Robert Altman picture, a moment of calm and consolidation for the community, and Robin Weigert (Calamity Jane) provides some smart commentary for this particular episode.

The box set has an entire disc of extras, but the best parts are the four commentary tracks, with the actors and producers speaking with affection and lamentation about the show and their place in it. The capper is Milch himself, talking about the season finale, “Tell Him Something Pretty.”

In his narration, he compares Hearst to Rupert Murdoch (and there’s no mistaking his sentiments), provides vivid anecdotes and shares his feelings about the characters, the show and its cancellation—not many in the industry would be so candid—while also assuring his audience that he intends to make two-hour films to finish off the series. As he exits, he tells us, “don’t think that the failure to wrap things up is a failure, it’s just a refusal to tell something pretty. Nothing has concluded, that we should conclude about it—you just gotta keep tryin’ to put one foot in front of the other.”

Note: In the Deadwood commentary, 38:34 minutes into episode five, Jim Beaver (Ellsworth) shares an anecdote about an interview with True West. Don’t know if it was me—I had a great conversation with Beaver, but I don’t recall the moment.