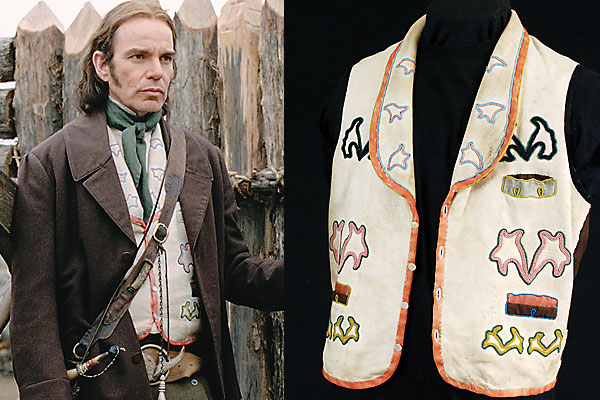 Billy Bob Thornton’s got a costume that frankly beats out pretty much most of what passes for collectible in the Hollywood memorabilia category so far this year.

Sure, when Audrey Hepburn’s iconic black Givenchy dress from 1961’s Breakfast at Tiffany’s hammered in at $800,000 last year, many movie collectors, after the first initial gasp, of course, probably surveyed their costume collectibles to see if they had any worthy of garnering a Tiffany price.

To give you a clue as to how monumental this sale was, Audrey’s dress even beat out Dorothy’s ruby red slippers from The Wizard of Oz ($600,000), but not Marilyn Monroe’s “Happy Birthday Mr. President” dress ($1.15 million) both sold by Christie’s in the past. (But then again, Marilyn’s dress wasn’t from a movie, so does it really count?)

Thornton’s Davy Crockett vest from 2004’s Alamo didn’t get a Tiffany price, nor come anywhere close to it. If anything, the bid it received at the Cody Old West auction held this June 21-22 more resembles the value of the Cracker Jacks ring that Paul had engraved for Hepburn’s character.

What’s cool about the vest is that it isn’t a “real phony, baby.” The vest is not some designer’s cuckoo idea of what someone who is most known for his coonskin cap would have considered fashionable when he set foot on the battlefield that fateful day in 1836. Costume Designer Daniel Orlandi actually replicated all of Crockett’s clothing, right down to the embroidered buckskin vest, which sold for $900. You can see the original vest on display at the real Alamo in San Antonio, Texas.

Sometimes Hollywood does get it right. And that, my friends, is worth more than anything at Tiffany’s—or at least it should be.

It’s hard to imagine Roy Rogers without a fringe shirt, but it was this original 1947 shirt designed by Marge Riley that set him apart from all the other cowboy movie stars. Sold with a Movies Magazine and a #137 Dell Roy Rogers Comics that showed Roy wearing the fringe shirt; $6,000.

Jessica Lange portrayed Patsy Cline, the first female solo artist inducted into the Country Music Hall of Fame, in 1985’s Sweet Dreams. The costume Lange wore during her character’s performance of “Walking After Midnight” on the Arthur Godfrey Show sold for $1,900. Designed by Ann Roth, the costume is an accurate replica of the types of outfits worn by the Country superstar (see photo of Patsy above).

Adapted from William Faulkner’s final novel, 1969’s The Reivers features Steve McQueen as the laid-back farm hand Boon Hoggenbeck. (By the way, Boon is the reiver, who is a cheat, a liar, a womanizer—basically the kind of guy you don’t want setting an example to impressionable young kids.) The vest he wore in the film hammered in at $1,400.

“I have been making a flag for Autie to take on his last campaign. It really is beautiful, like the old one, only larger—red and blue silk, with white crossed sabres on both sides, and edged with a heavy white cord,” Libbie Custer wrote her parents on April 2, 1865.

That cord is the single most important feature of Custer’s fourth personal guidon that sold at Heritage Auction Galleries for $750,000 on June 24. Libbie’s name, which she embroidered on the swallowtail ends of the bars, was shot away during a battle that year. The cord remains, and the provenance is strong: it links all the way back to Lt. Col. Charles Custer, a grandson of Nevin, George’s brother.

Back in 1995, when Bonhams & Butterfields held an Important Custer Memorabilia sale, this Civil War battle flag sold for $150,000. What an encouraging markup—five times over—for today’s Custer and Civil War collectors.