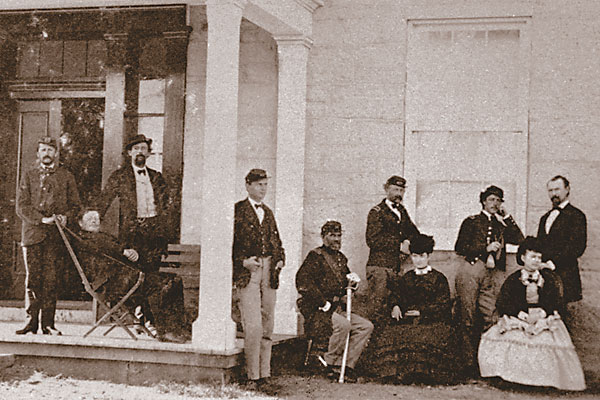 The “Savior of Fort Stanton” is too modest to claim that title for herself, but anyone who has watched the reversal of fortune at one of the West’s most enduring forts knows that Lynda Sanchez deserves it.

Two years ago, a 600-unit subdivision threatened the fort that has been “the heart of Lincoln County” since 1855. Today, Fort Stanton and its 200 acres are New Mexico’s newest state monument. It wouldn’t have come to pass had it not been for Lynda Sanchez.

She devoted most of her days and nights—racking up an enormous phone bill, sending out hundreds of e-mail and snail mail letters and rallying her troops—to stop the development and show state officials what a gem they had in the 80-building stone fort along the Rio Bonito.

“We aren’t going to have much of the West left if we don’t draw a line in the sand,” she tells True West. “This is where I drew the line.”

On her side of the line was the essence of New Mexico history: Kit Carson, John “Black Jack” Pershing, Billy the Kid and hundreds of Buffalo soldiers stayed at the fort. The fort remained intact, even when the military abandoned it in 1896. During WWII, Fort Stanton became America’s first federal tuberculosis hospital and first German internment camp. Later, mentally ill patients were housed there, then female prisoners and currently, it’s home to a drug rehabilitation program.

Along the way, some buildings were used while others have been unoccupied (except by raccoons), but many buildings were looted of their furnishings and there has long been a need to restore and preserve the complex.  In 2003, Gov. Bill Richardson established the Fort Stanton Development Commission and appointed Sanchez to help develop a plan. To her horror, Sanchez watched the commission reject ideas for national or state designation, and instead embrace the idea of building a subdivision a stone’s throw from the fort. “It was like a slap in the face,” she recalls. “I hit the roof.”

It turns out preserving the West is part of her DNA: Her father, Joe Carithers, helped create Arizona’s state park system 40 years ago and served as Interior Secretary Stuart Udall’s advisor on national parks and preservation. Lynda’s own ties to the area run deep; she’s a retired teacher of Southwest history and anthropology, and some of her former students became her allies in this fight.

Sanchez had never had an e-mail address when all this began and she wasn’t sure how to use it, but she learned it quickly. “E-mail became one of my most powerful weapons in the fight,” she says. “It’s instant communication.”

She contacted everyone she thought would care and got support from many circles: historians Robert Utley (see July 2007) and Fred Nolan (see p. 35), Apache Chairman Marc Chino, historical societies, her Boots and Saddle group. She interested newspaper reporters and appeared before the Lincoln County Commission—the commissioners “vehemently” opposed the plan. She also personally conducted a tour of the fort for a delegation from state government, showing them what they had and what was at stake.

She learned that “networking is extremely important,” but most of all, “people have got to stop being apathetic.”  While keeping an eye on her own backyard, she’s anxious to help anyone else girding for a fight. Her phone number is 505-653-4821.

The West is lucky to have this Preservation Hero. Thanks to Lynda and her peers, the governor has allocated $1 million to renovate the fort’s administration building. That, combined with a $210,000 grant from the federal Save America’s Treasures and $550,000 from the state, allocates $1.76 million towards helping bring the fort back to its pristine state.