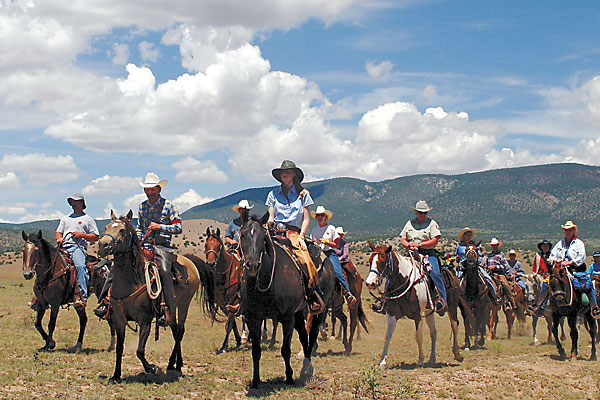 On a hot August day, I borrowed a dark bay quarter horse named Jake to participate in a Pony Express Trail Ride from the ghost town of White Oaks to the historic town of Lincoln in New Mexico.

I was one of about 40 riders, some from as far away as Indiana, who saddled up for a three-day ride in Billy the Kid Country. I felt like I had to watch my back (Billy the Kid and other outlaws once rode on these trails). Thankfully, Jake seemed right at home and not at all agitated by the other horses, the bright sunshine or the rugged terrain.

Every August since 1994, the Lincoln County Sheriff’s Posse has been organizing a commemorative Pony Express ride (the Pony Express route did not go through New Mexico). The ride begins in White Oaks. You may want to arrive early to take in the sights of this once thriving mining town. All told, the mines in the area yielded around $20 million worth of gold and
other minerals, with Baxter Mountain surrendering the most pure gold.

Today, you can stop by the Cedarville Cemetery to pay your respects to John V. Winters, who was one of the first to discover gold at Baxter Mountain in 1879.  Deputy Sheriff James Bell, who was killed by Billy the Kid while escaping from Lincoln County Courthouse, is buried here, as is Susan McSween (Barber), whose husband was the de facto leader of the Billy the Kid faction. Her large ranch holdings in the Three Rivers area earned her the title “Cattle Queen” of New Mexico.

Day one of the ride out of White Oaks was the most challenging for our group. Riders had to navigate somewhat steep and rocky switchbacks, but this only lasted for an hour or so. The exact route of the ride varies each year, but a rider should be prepared to spend about five to seven hours each day in the saddle and to bring his own horse, unless you can work out borrowing a horse from a friend.

The ride covers less than 50 miles of stunning trails and rangelands, right up through the Capitan Gap into the high country for spectacular views of valleys and snow-covered mountains. You’ll ease down through fragrant Junipers into grassy country, enjoying stunning vistas every day. What makes this ride particularly unique is that you travel through some private ranch land as well as the Lincoln National Forest.

The sheriff’s posse makes the ride easier for horse and rider.  They move your rig from one campsite to the next and organize sack lunches and chuckwagon meals, including a steak dinner with live music. They make sure a doctor is along for the ride in case of any on-the-trail calamities, and a farrier is at each campsite should your horse lose a shoe. The wranglers bring up the front and rear of the ride to ensure everyone is safe in the saddle.

Even through I started out riding with strangers, by the end of the ride, I had made a few friends. It’s that subtle chitchat that happens so naturally on a trail ride that can cause the area to come alive with color, especially if you get to talking to a local—and you will. Each day you’ll eat lunch on the trails and at night, camp out under the stars. This means that both you and your horse have to be prepared to camp out and play well with others.

Riders are rewarded at the end of their three days with the opportunity to ride in an all-American parade in Lincoln, where the mail is ceremoniously delivered to the local post office (riders take turns carrying the mail during the trek). When we rode down Main Street, it was lined with people in beach chairs, on benches and in truckbeds, cheering us on. I felt a real sense of accomplishment, riding in my very first parade alongside the sheriff’s posse.

The ride takes place during Old Lincoln Days, so the town is packed with people and offers many events. I dismounted at the end of Main Street so I could explore Lincoln and watch the “Last Escape of Billy the Kid” pageant.

If you are interested in joining this Pony Express ride, you’ll want to sign up early because the ride is limited to the first 45 riders who pay the $350 fee. This covers your meals and water, transport of your belongings to each of the campsites and the use of port-o-potties and hot showers—a luxury while camping out.

August is monsoon season in New Mexico, so you’ll want to pack rain gear, sunscreen and lip balm. Our group lucked out with the kind of big blue skies dotted with puffy clouds that can only be seen in parts of the great American West.

It takes some preparation to enjoy a multi-day trek like the Pony Express ride, but the Lincoln County Sheriff’s Posse takes care of so much for you that planning for this ride is a lot easier. The rewards of experiencing the camaraderie of a trail ride and living history on horseback are well worth it.