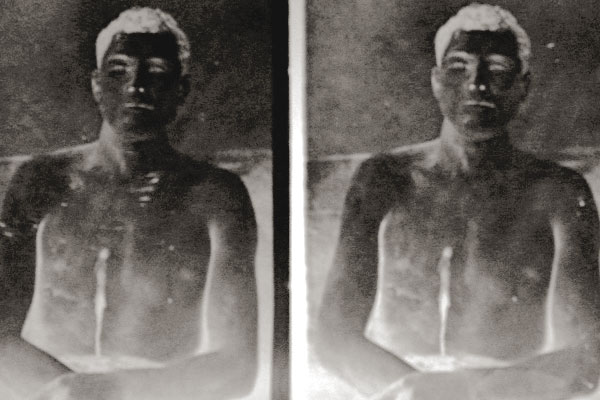 Back in the 1940s, visitors to the men’s room of a Phillips 66 gas station in Northfield, Minnesota, were greeted by an unusual sight—photos of the James-Younger Gang after the members’ failed raid on the town bank in 1876. The photos included postmortem shots of Clell Miller, Charlie Pitts and Bill Stiles, as well as images of the badly wounded Younger boys, Cole, Jim and Bob. The collection, gathered in one frame, also featured photos of Northfield, one of murdered bank worker Joseph Lee Heywood and one of the Madelia posse that captured the Youngers.

These photos weren’t cheap knockoffs; they were made from original negatives acquired by the gas station owner from the son of the photographer, probably in exchange for auto service (and you thought $3.00 a gallon was a high price!). The owner’s wife, not thrilled with the photos of dead men, relegated them to the bathroom.

The collection was passed down to the station owner’s son, Benjamin Nystuen, who moved to Colorado after graduating from St. Olaf College in Northfield. He kept them in a box for some 50 years. Most folks didn’t know that the negatives still existed.

They will now. In May, Nystuen donated the collection to the Northfield Historical Society, where they’ll become a key part of the permanent exhibit on the bank raid.

Cleaning Up a Western Town

This isn’t about some Old West marshal bringing law ‘n’ order to the frontier but something just as impressive.

In May, some 300 tourism professionals traveled to Virginia City, Nevada. The task: maintenance and preservation of some of the town’s historic sites. One group rebuilt steps to Piper’s Opera House that had not been there in more than a century. Another group restored tracks and an original caboose at the Virginia & Truckee Railroad. Some repainted the sidewalks along the main street, while others cleaned the brush and grass from local cemeteries.

The nonprofit Tourism Cares organized the event. This is the fifth year the group has selected a town for cleanup, and the first time it has gone west of the Mississippi. Participants volunteer for the projects, and they pay all of their own expenses.

Tourism Cares provides grants to tourism preservation projects, mostly in the U.S. but a few overseas. It also offers scholarships to students preparing for careers in the hospitality and tourism industries—some of the funds allow students to participate in volunteer projects like the one in Virginia City. 781-821-5990 • tourismcares.org

An Alaskan Gold Mine

George Rapuzzi was born in Skagway, Alaska, back in 1899, at the height of the Klondike Gold Rush. He found his fortune away from streams and mines—in tourism. As did his pal Martin Itjen. The two also collected items from the area. Actually, calling it a collection is a bit like calling Mount Everest a hill. They picked up a 1906 streetcar, native carvings, art, documents, photos—approximately 450,000 items. They also bought five historic buildings, including the saloon owned by legendary conman Soapy Smith.

In the 1980s, Rapuzzi’s niece inherited the collection, which she sold this April to the Rasmuson Foundation, an organization that awards about $20 million per year to “help improve the quality of life in Alaska.” The foundation paid $1 million for the collection; even Soapy would consider that a bargain.

But Rasmuson isn’t keeping it; it will distribute the collection among the City of Skagway, the Alaska Natural History Association and the National Park Service. Before the group releases the items, it will create a comprehensive inventory.

The remarkable foresight of Rapuzzi and Itjen, combined with the civic-mindedness of Rapuzzi’s niece and the Rasmuson Foundation, have preserved a gold mine of Skagway’s history. Maybe that will lead a new rush toward preservation. 907-297-2700 • rasmuson.org

Sometimes it pays to dig through paperwork. The historic James and Jessie West Mansion in Pasadena, Texas, is safe for the next five years. Built by an oil and lumber tycoon in 1930 as the centerpiece of his 30,000-acre spread, the mansion is currently owned by pro-basketball great Hakeem Olajuwon. He is selling his prime commercial land, just outside Houston, and preservationists feared the worst. But a local resident tipped off the Greater Houston Preservation Alliance about a 1992 amendment to the land deed that put a 20-year moratorium on demolishing the building. The mansion is now on the list of Texas’ Most Endangered Historic Places. Since Pasadena has no land-use regulations, just about anything could happen in 2012. 713-216-5000 • ghpa.org

Back in 1867, Texas rancher O.W. Wheeler was the first cattleman to drive stock up the Chisholm Trail to Kansas. The National Drover’s Hall of Fame is re-creating the event with its Great American Cattle Drive, September 27-30, in Ellsworth. All event proceeds go toward the renovation of Ellsworth’s 120-year-old insurance building, two doors south of Drover’s Mercantile. When it’s finished, the facility will be the home of the National Drover’s Hall of Fame, including a museum and a library dedicated to the history of the cattle drive era, from the 1860s-1880s. Total price tag: $5.3 million. 785-472-4670 • nationaldrovers.com