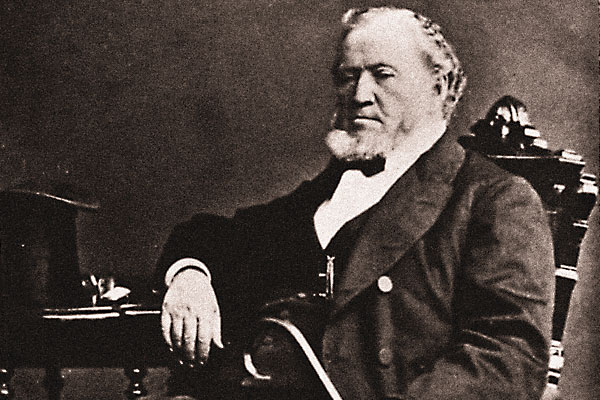 “It was very famous in its day. The whole United States rang with its horrors.” But by 1872, when the classic Roughing It was first published, Mark Twain had to label it as “The now almost forgotten ‘Mountain Meadows Massacre.’”

In 1872, the massacre was only 15 years old. Imagine how almost forgotten Mountain Meadows is today.

Here I am, at a dot on the map off state Highway 18 north of St. George in Utah’s Dixie National Forest. No national park. No museum. Just two monuments: one dedicated in 1990, built by the Mountain Meadows Association and maintained by the state’s parks and recreation department, another built in 1999 and maintained by the Church of Jesus Christ of Latter-day Saints, i.e., Mormons.

Of course, right now, I’m glad the site is forgotten because I’m listening to Will Bagley talk about the massacre and what part the leaders in the LDS church may have played. I have to think (hope) the powers-that-be in Salt Lake City don’t know Will is here.

Will’s monumental 2002 book Blood of the Prophets: Brigham Young and the Massacre at Mountain Meadows won just about every Western history award there is, except the Western Heritage Wrangler Award, and that went to Sally Denton a year later for her 2003 book American Massacre: The Tragedy at Mountain Meadows, September 1857. Both books stirred up controversy in Utah.

Sally’s not here. Probably a good thing. Then the powers-that-be would really be after us. Not that I’m paranoid.

Juanita Brooks is here. In spirit, I mean. After all, it was her 1950 book The Mountain Meadows Massacre that resurrected that almost forgotten story of a wagon train of Arkansas emigrants murdered by Mormon militia and Paiute Indians on September 11, 1857. Some 120 men, women and children were slain, with 18 (all under age eight) spared to be adopted into Mormon households until most were reunited with their nearest kin two years later. Only one man, John D. Lee, was convicted of the crime, executed here in 1877. Yet for more than a century, many have pointed a finger in Brigham Young’s direction and asked, “What did you know and when did you know it?” (if not, “Did you order it?”).

I ask that question myself. Brigham takes the Fifth. I look over my shoulder. Then it hits me: The powers-that-be don’t care if Will Bagley’s stirring up trouble again. No one’s going to kick us out of Utah. Heck, Will still lives in Utah.

More recently, the massacre has been discussed in novels, more nonfiction (not just Juanita’s, Will’s and Sally’s), docu-mentaries and at least two stage plays. Even a movie, September Dawn with Jon Voight, which has been moved up to an August 24 release date [see June 2007 Westerns].

The powers-that-be have no reason to fear. Mountain Meadows will always be almost forgotten, which is the real tragedy 150 years later. And don’t get me started on what happened at the Waxhaws in 1780. Criminy, that scored only 20,400 hits on Google.