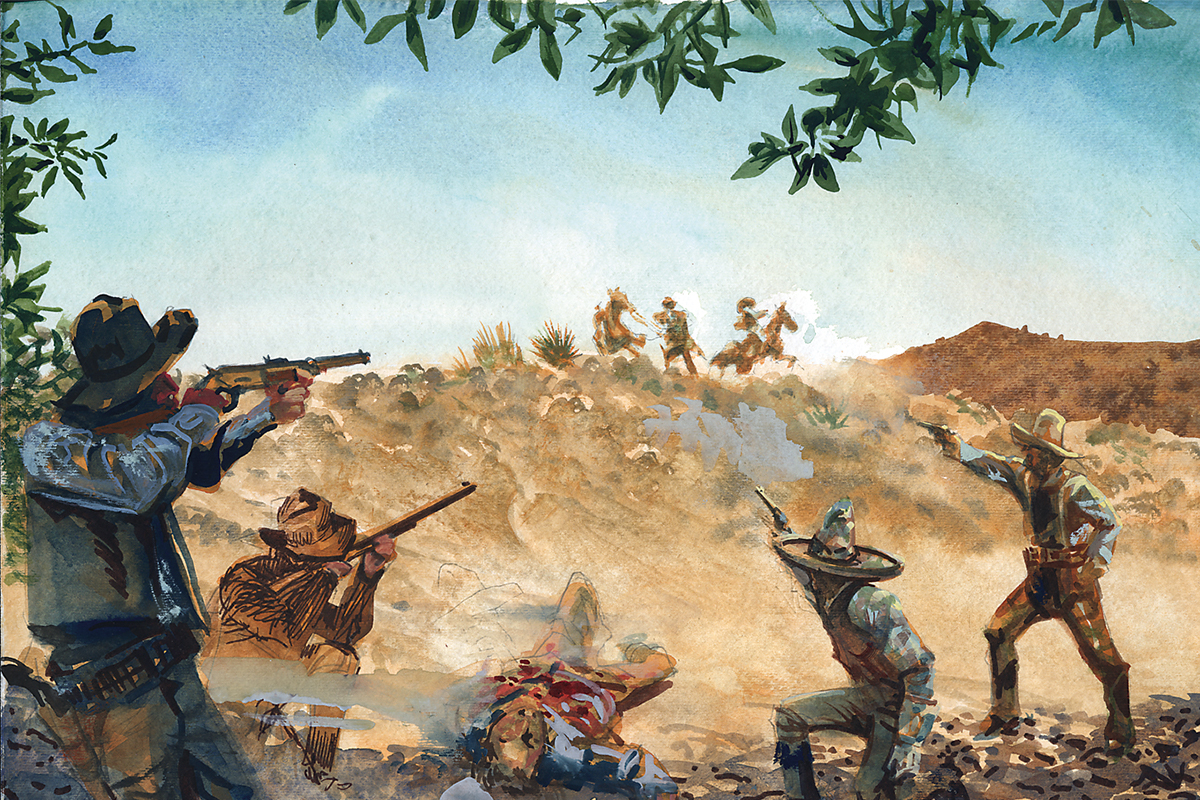 Based on the research of Bill Evans

Wyatt Earp and his men take breakfast north of Contention, Arizona, on the San Pedro (see map, opposite page), then ride south toward the Babocomari River to scout out possible hiding places of various criminals.

At the scent of water, Wyatt’s horse quickens and Wyatt lets him make his gait. Fifty feet from the spring, intuition brings Wyatt up short. He swings out of the saddle, loops the reins in his left hand with his shotgun in his right hand and walks forward. Texas Jack and Sherm ride behind Wyatt, with Doc and Turkey Creek Jack much farther to the rear. Another step gives Wyatt a full view of the hollow. Two cowboys jump to their feet, one yanking a sawed-off shotgun to his shoulder, while the other breaks for the cottonwoods.

Wyatt later remembers shooting at nine cowboys who each “had a rifle at his shoulder, and every rifle blazed.” Aiming at the outlaw chieftain Curly Bill Brocius, Wyatt fires both barrels of his shotgun, fatally striking Curly Bill in the chest, almost cutting him in half.

In spite of his rapid retreat, Sherm is hit in the side and his binoculars are shot from his neck. Texas Jack’s horse is killed in the volley of cowboy fire. 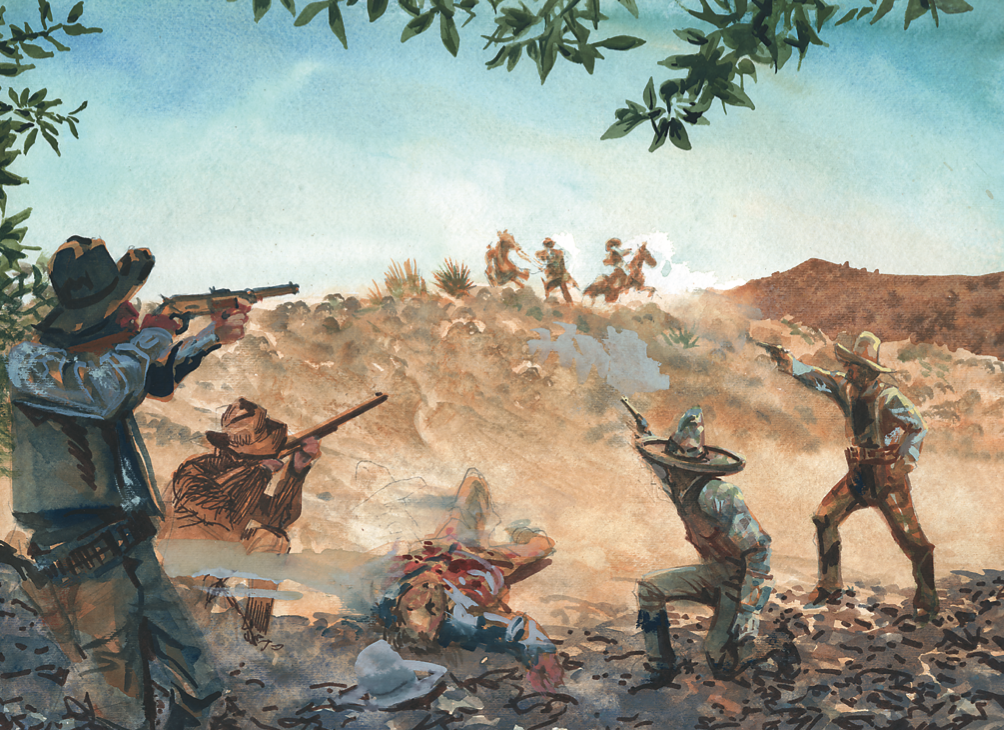 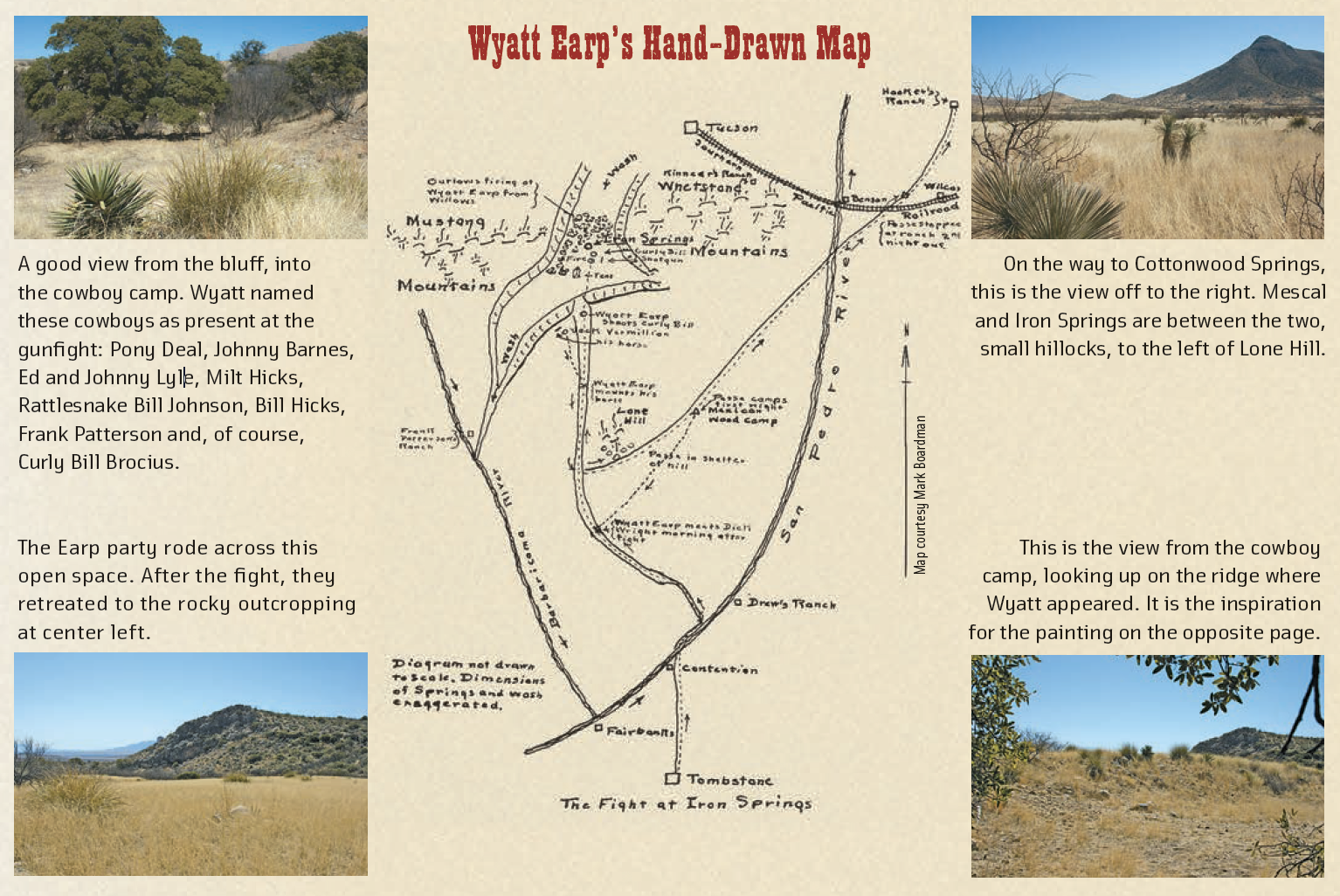 THE CASE FOR COTTONWOOD SPRINGS

For more than a century, writers have identified the site of Wyatt’s shoot-out with the cowboys as having taken place at Arizona’s Iron Springs. Later writers thought that modern maps had changed the moniker to Mescal Springs, which is actually another spring near Iron. Neither site matches Wyatt’s description of the fight. You’ll find no cottonwoods and, more important, no way to surprise someone camped at either spring. The “Lone Hill” is nearby, but it is on the wrong side of the trail from Wyatt’s map (see previous page). 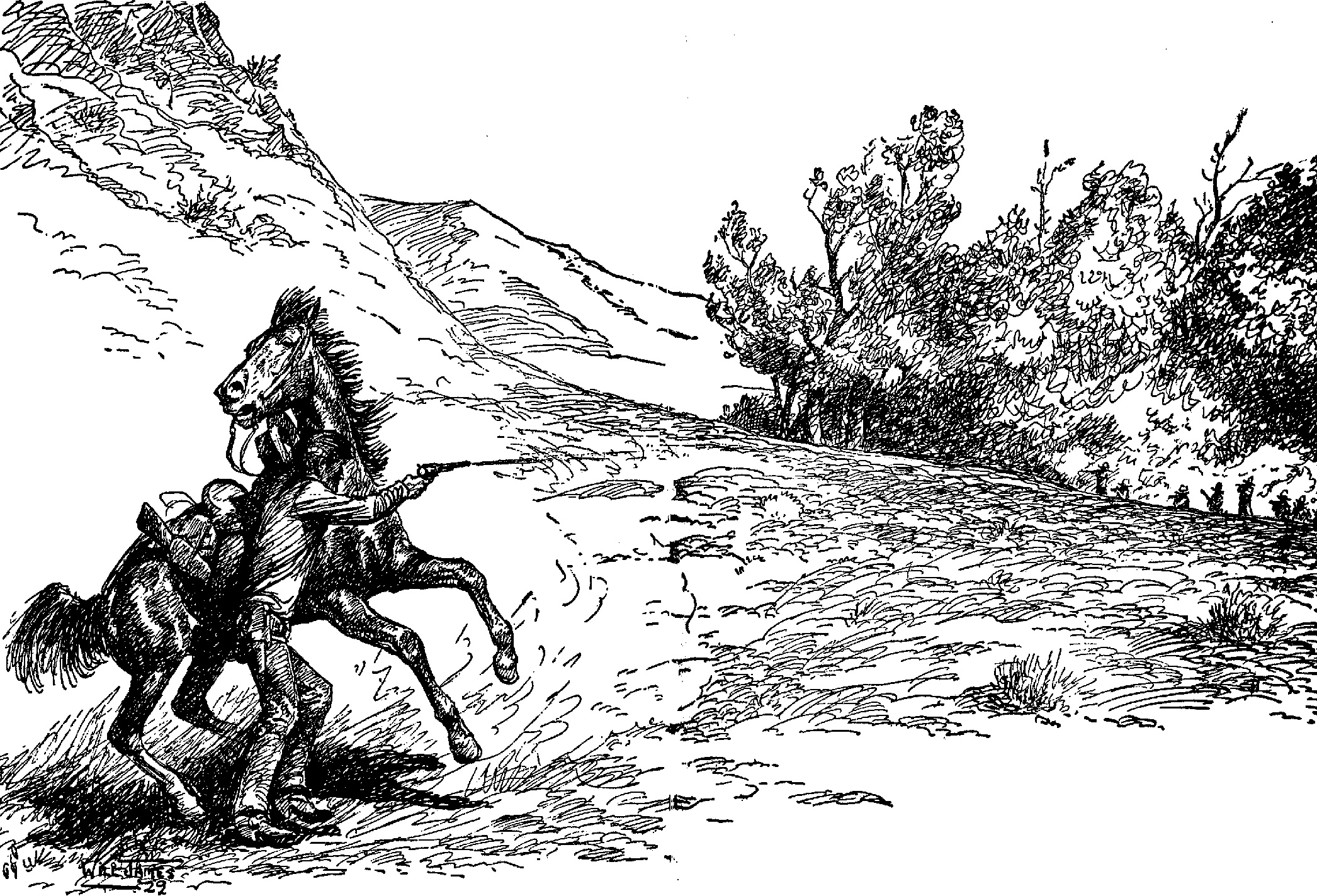 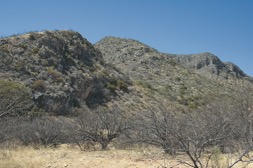 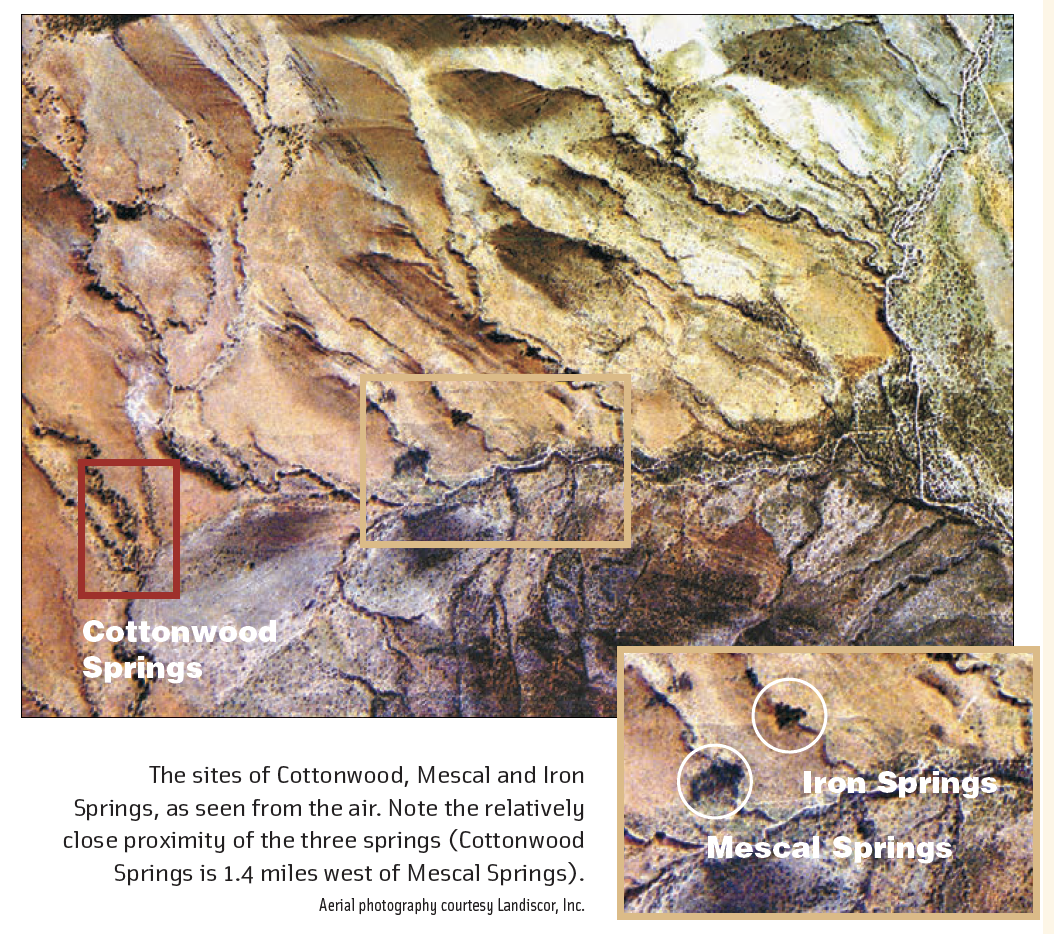 For years, folks claimed to see Curly Bill in Texas, Montana, Colorado and Old Mexico. Whatever happened to Curly Bill, he is no doubt still laughing at the absurdity of our obsession with him (see painting at right).

Late in life, Wyatt claimed he could name all nine cowboys at the spring The cowboy version differed: Only four cowboys were said to be at the spring; Wyatt had fired, but his bullets didn’t strike anyone; and Curly Bill wasn’t even there. 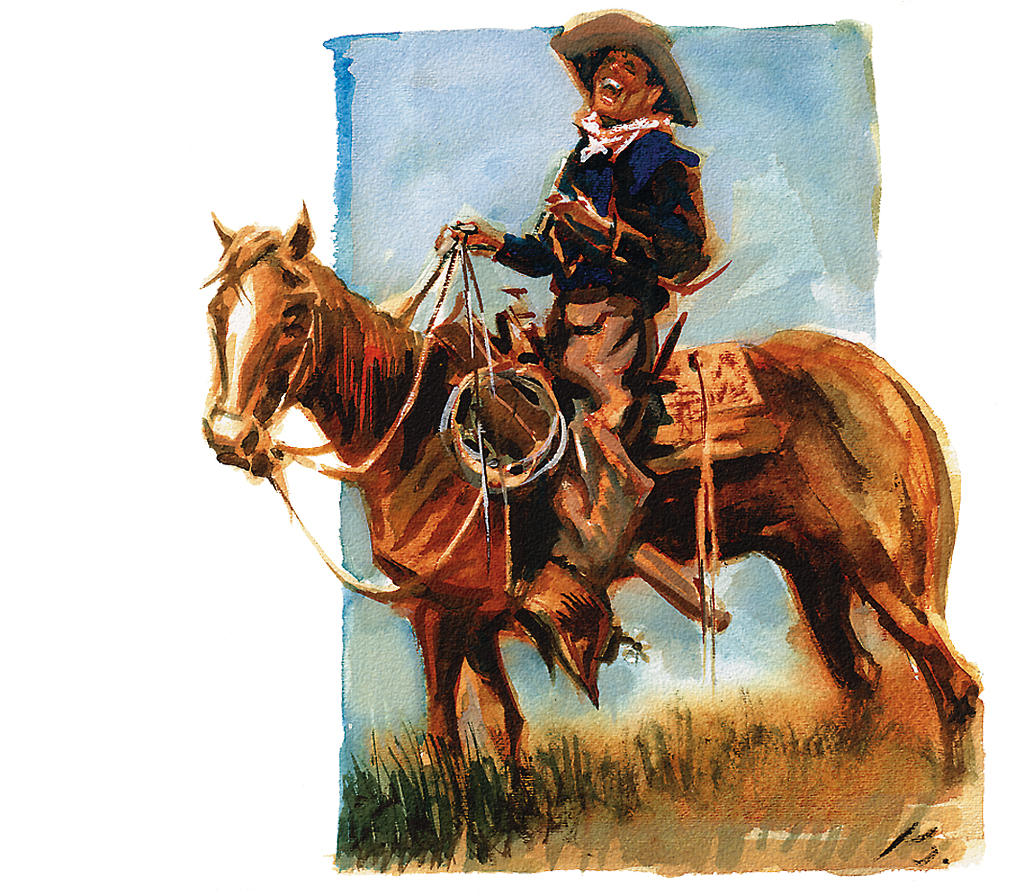