Double-Take on Bass Reeves and the Lone Ranger 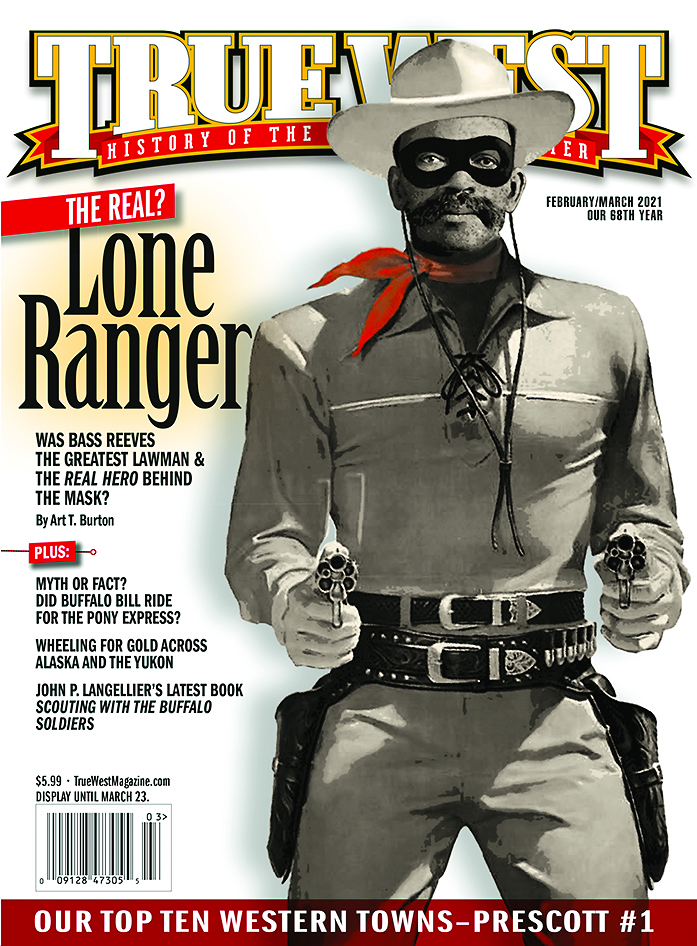 Well, I’m glad you did not offer me a vote on this month’s cover (February/March 2021). It’s the first cover of TW in all I have seen that I really don’t care for. It makes Bass Reeves into a cartoon —Larry Floyd (Chesapeake, Virginia)

Your February/March 2021 cover is the best-designed, and most relevant to the inside stories, I’ve seen in the years I’ve been reading the magazine. It is perfect: provocative and perplexing, perfectly setting up the reader for the Bass Reeves materials, which are themselves outstanding. —Dr. Jim Vickrey (Montgomery, Alabama)

What a fantastic True West issue (February/March 2021) on the Legendary Bass Reeves, deputy United States marshal and Muskogee, Oklahoma, policeman. I portray the legendary Bass Reeves and this epic magazine coverage means more to me than Mr. Harold T. Holden’s statue of Bass Reeves on horseback with his dog riding Into the Territory at Pendercraft Park in Fort Smith, Arkansas. Thank you for the fantastic coverage. I especially enjoyed Art T. Burton’s decades-long research on Old Baz’s life and times and Burton’s and Mark Boardman’s article further explaining the Bass Reeves vs. The Lone Ranger myth. Bass had no master but the letter of the law itself, since he served the murder arrest warrant for his son Benjamin “Bennie” Reeves. One of the things you missed is whenever I do live entertainment interactive shows at Old Tombstone Western Theme Park and other places, I am in full Bass Reeves wardrobe, so people want to know who I am. They have a very shocking aha moment about the real Wild West history they never knew about, after I quickly explain the forgotten history. This is what True West is bringing to light finally. I think it is long overdue, and I truly hope that folks can remember a great lawman with 35 years of service. As I portray Bass Reeves, deputy U.S. marshal, I hope to see every one of y’all in the Territory, whether I have your writ or not. You might be lucky enough to get a Bass Reeves silver token for gratitude. —Ernest Marsh Actor/Reenactor as Deputy U.S. Marshal Bass Reeves (Mesita, Colorado)

Buffalo Bill: Did He or Didn’t He?

Today, those historians who are skeptical can only point to his exaggerations as their basis for questioning his involvement; they do not provide any dissenting statements from those involved with the Pony Express. I showed Holt the statement by Frank Winch that Cody told him he had not ridden in the Pony Express, in the interest of historical disclosure, not because I agreed with it.  Winch said Cody denied being a rider in “many talks.” If Cody was so free in his disclosures, why were they only to Winch? And why did Winch continue to write that Cody had ridden in the Pony Express? As they would say in a court of law, Winch’s statement is hearsay. It raises questions, but it is not definitive.

I agree that Will Cody, as Buffalo Bill, probably exaggerated his youthful exploits, including those associated with the Pony Express. But I cannot agree with Holt’s conclusion, based largely on Winch’s private note, that it is “truthful, accurate history” to say Cody did not ride with the Pony Express. Let the controversy continue! —Steve Friesen , Former Director of Buffalo Bill Museum and Grave and True West’s “Collecting the West” editor (Littleton, Colorado)

The controversy over whether Buffalo Bill Cody rode for the Pony Express or did not may not ever be completely answered, despite Winch’s journal entry. What is fact is that Cody promoted his association with the mail service through the end of his life, including being the center of attention at the dedication of the Pony Express Monument in St. Joseph, Missouri, on April 3, 1913. He is described in most of the newspaper articles reporting on the dedication as “William F. Cody (Buffalo Bill), one of the original riders.”

In your February/March 2021 issue on page 12 [“Lincoln: Prepare Ye the Way for the Horde,” Investigating History column by Mark Boardman], you said Ulysses S. Grant made Yosemite the first national park. This is wrong. Yellowstone National Park was established by the U.S. Congress and signed into law by President Ulysses S. Grant on March 1, 1872. Yellowstone was the first national park in the U.S. —Charles Wold True West Maniac # 341 (Banner, Wyoming)

Thank you. You are correct. President Abraham Lincoln was the first to protect land for preservation with the Yosemite Grant Act on June 30, 1864, but it was President Ulysses S. Grant who signed into law the first national park, Yellowstone, on March 1, 1872. One factor that influenced both Lincoln’s and Grant’s decisions were Carleton Watkins and William Henry Jackson’s dramatic photographs, respectively, of Yosemite and Yellowstone.

The Mystique of Frontier Violence

The gentleman who wrote to complain of “glorifying outlaws, murderers and thieves (Shooting Back, December 2020) has a point, although I’m loath to acknowledge it since he contrasts the practice with his own “integrity.” It’s been my observation that those who have integrity never make reference to it.

The world of myth is populated with brigands, from Robin Hood to Lochinvar to Daffy Duck; they are the seasoning that provides the flavor. In truth, gunfighters, bank robbers and stagecoach bandits were sideshows, which if they were removed from the equation wouldn’t affect the march of Western history one way or the other. That history was made on farmland, cattle trails, battlefields and in the halls of Congress.

The later, underappreciated novelist Richard S. Wheeler summed up the mystique of the frontier when he said it was the place everyone could go to start over fresh, whether he’d failed financially, become ill, or broken the law. No one held him to account for his past, because no one asked; to do so would have risked him being asked about his own. The Wild West is a place that, because it no longer exists, continues to cast its spell.