Gambler draws a “pair of sixes” and is “froze out.”

Based on the research of Gary L. Roberts

Mike Gordon has been on a multi-day binge-drunk when he comes into the Holliday Saloon on Centre Street, Las Vegas, New Mexico Territory, and demands that his “mistress” accompany him to another saloon on Railroad Street. She refuses because she is working, so he makes threats and leaves, allegedly swearing he will “kill someone, or be killed himself before morning.”

He gets his wish.

The Las Vegas Gazette picks up the story: “Gordon was standing in the street to the right of the hall after some of his threats and drew a revolver and fired, the bullet passing the pants of a Mexican and struck in the floor in line with the bartender who was standing at the rear of the bar. Other shots were fired immediately but it is difficult to tell how or by whom.

“It is said that Gordon fired a second shot. Every person there says three shots were fired, while several maintain that five in all were fired.”

According to Bat Masterson, who later told the story to a reporter in 1886, Gordon fired a shot from the sidewalk that “whizzed a couple of inches from Doc’s head and went crashing through a window at the rear of the room. Doc drew his gun and rushed to the front door and saw Gordon standing on the sidewalk with a revolver in his hand. Gordon raised his revolver to fire a second time but before he could pull the trigger, ‘Doc’ had shot him dead.”

Well, not quite. According to the Gazette, the Good Doctor’s shot hit Gordon in “the right breast, just below the collarbone, and exiting below the shoulder blade.” Then we get this: “Gordon at once ceased firing and disappeared. An hour or two later, a Mr. Kennedy went into his tent some thirty or forty yards away, to go to bed and hearing groans investigated and found Gordon laying on the ground outside. The news soon spread and his woman arriving on the ground had him taken to her room east of the court house, where he died at 6 o’clock Sunday morning. In the afternoon the Coroner held an inquest and the jury returned a verdict of excusable homicide.”

No charges were filed against the locally well-liked Holliday. His name is not even mentioned in any of the accounts and the coroner’s jury apparently believed Gordon got what he deserved.

“Of late years, Gordon had been disfigured by the loss of his nose. It was bitten off by a gambler from whom he was taking money. His antagonist seized him with a grasp of iron by both ears and with his teeth wrought the disfiguration.” —Las Vegas Optic

The coroner for the dead Gordon was Hyman G. Neill, known as “Hoodoo Brown,” who was the big boss of East Las Vegas, also known as New Town. He was also the justice of the peace and the leader of the Dodge City Gang. Besides Holliday, the group also included Mysterious Dave Mather, Dave Rudabaugh, Frank Cady, John “Bull Shit Jack” Pierce, William P. “Slap Jack Bill” Nicholson and Joe Carson, among others. Doc’s partner in the saloon was Jordan Webb, a known associate of Hoodoo Brown. Nobody followed up on the murder. The fix was in. 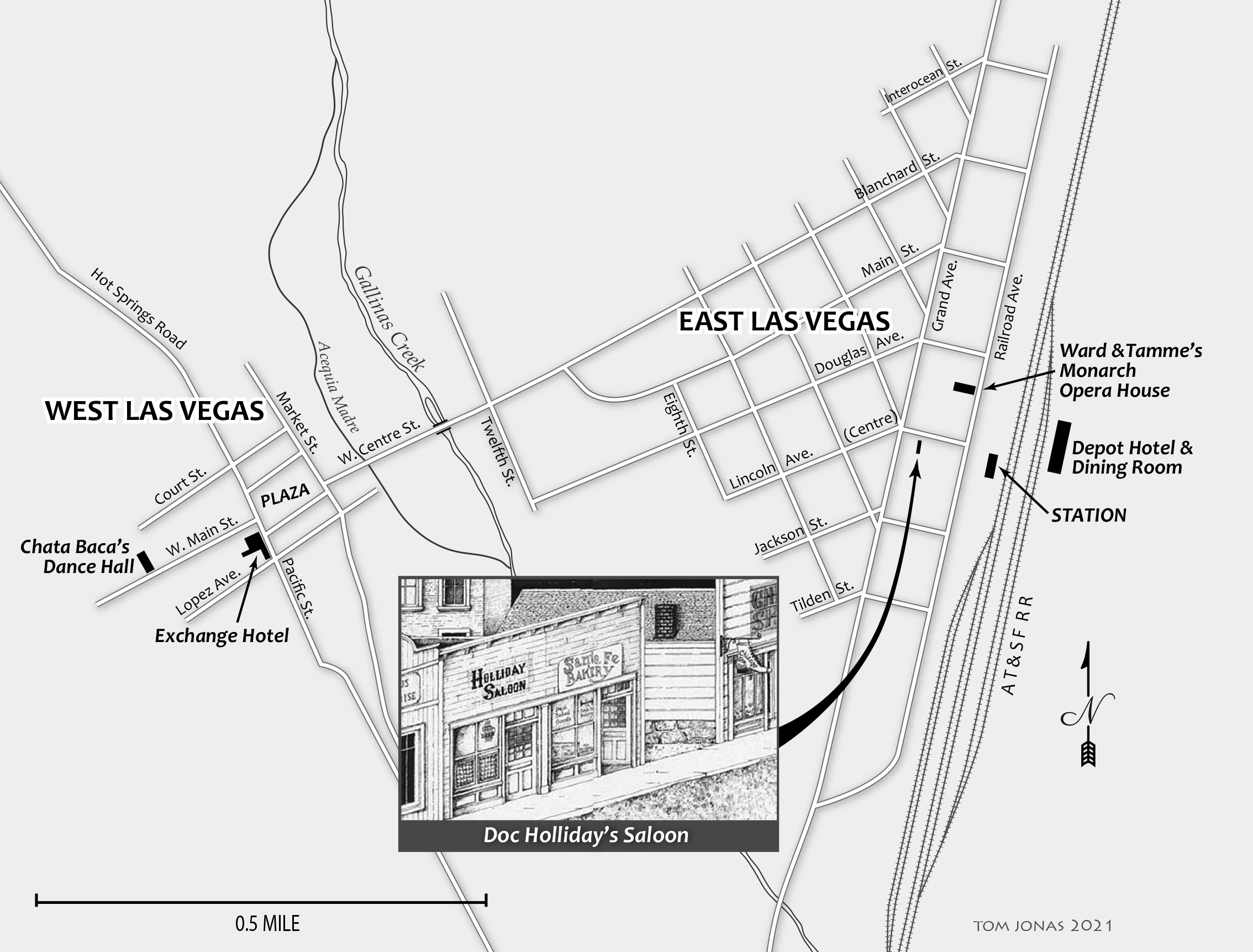 In September of 1879, Wyatt Earp showed up in Las Vegas, with a young woman named Mattie Blaylock, his brother Jim and his family. After spending a month in New Town, the Earps and Doc, along with his live-in girlfriend, Kate Elder, traveled by wagon to the boomtown of Prescott, Arizona Territory. When the Earps moved on to Tombstone, Holliday remained for another several months, even returning to Las Vegas at one point to settle accounts. When Holliday returned to Prescott from New Mexico, he ended up rooming on Montezuma Street with the acting governor of Arizona, John J. Gosper.

Doc finally arrived in Tombstone in September of 1880 and was soon swept up in the Earps’ troubles with the cowboys which culminated with the shootout behind the O.K. Corral on October 26, 1881. Doc rode with Wyatt on his so-called Vendetta Ride and left the state a fugitive in April of 1882.

The Las Vegas Optic, on July 20, 1881, reported, “It will be remembered, especially by the pioneers of the East Side, that Doc Holliday was at one time the keeper of a gin-mill on Centre Street, near the present site of the Centre Street bakery. Doc was always considered a shiftless, bagged-legged character—a killer and professional cut-throat and not a whit too refined to rob stages or even steal sheep. He is the identical individual who killed poor, inoffensive Mike Gordon and crept through one of the many legal loop-holes that characterized Hoodoo Brown’s judicial dispensation.”

Doc landed in Colorado where he spent time in Denver, Pueblo and Leadville—where he got into another shooting scrape—and, finally cashed in his chips at the Glenwood Springs Hotel in Glenwood Springs on Nov-ember 8, 1887.