The Bullet, Not the Ballot Box 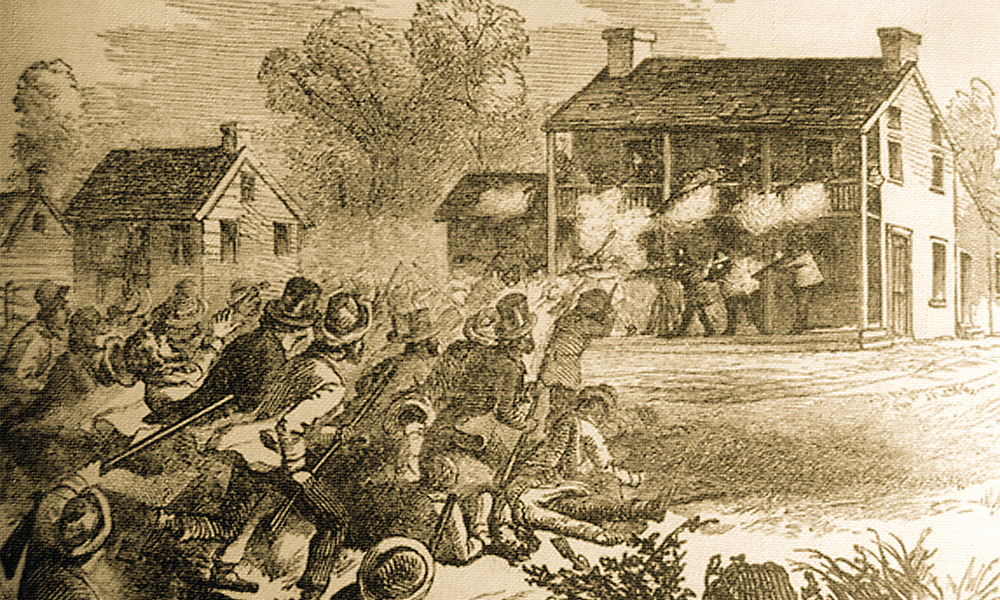 In 1840, it wasn’t politics as usual in Bellevue, Iowa Territory. Two well-armed sides decided that the ballot box wasn’t enough to finalize who held public office and power in the region.

On the one side was W.W. Brown, a wealthy investor who relocated to the area in 1837. He was generous with his friends—he paid high wages, offered credit at very low rates and generally spread his cash around from his headquarters in the town’s only hotel. Brown became very popular with early Bellevue settlers. But others, outside his circle, were less impressed. They accused Brown of counterfeiting, stock rustling and other bad deeds. The two sides couldn’t find common ground.

Brown ran for Jackson County sheriff as a Democrat in 1838, but lost out to Whig William Warren—a race that set the two men at odds. In 1840, Brown managed to get the Democratic nomination for Territorial representative. Thomas Cox had held that position but was out of town during the party caucus. Cox assumed he’d be re-nominated as a matter of course; when that didn’t happen, he became furious with Brown. Cox ran as an independent and was re-elected and the bad blood between Brown and him increased.

And it got worse in January 1840, when Democrat (and Cox associate) James Mitchell shot and killed Brown’s friend James Thompson. The next day, Cox (with Sheriff Warren’s aid) drafted arrest warrants for Brown and 22 of his colleagues. The charges: rustling, theft, counterfeiting and more. But Warren warned him that arresting the group would be very difficult.

On April 1, Warren approved Cox to raise a posse of 40 men for the purpose of taking Brown and company into custody. Many posse members had military experience
and were able to take care of themselves in a fight. That afternoon, the group marched on Brown’s hotel in Bellevue. Brown greeted them with a rifle in hand but realized that he was in a no-win situation and lowered the weapon. Somehow, the gun went off, the bullet ripped through Cox’s coat but did no damage to his body. Members of the posse thought the shot was intentional and opened up, killing Brown where he stood.

And the fight became general. The posse set fire to the hotel, forcing most of the folks inside to flee.

In just a few minutes, three men on each side lay dead. A civilian who’d rushed to the scene to help one of the wounded was also gunned down. Thirteen members of
the Brown faction were taken into custody; Warren and Cox wanted to execute them on the spot, but as things cooled down they decided to take a vote. Forty-two wanted to whip the miscreants, while 38 voted to hang them. The captives were given anywhere between four and 39 lashes each and then ordered to leave the county, never to return. Other Brown associates either took a low profile or left the area.

A special jury looked into the shootout and cleared the posse of any misdeeds, ruling that they’d acted within the law.

Some public outcry over the incident followed, but that didn’t hurt Thomas Cox’s political career. He was re-elected to the Territorial Legislature, where he was named Speaker of the House. Cox then won a seat in the Territorial Senate, where his colleagues elected him as that body’s president. He died of pneumonia in 1844.

Perhaps his leadership in the so-called Bellevue War actually worked to his benefit. But for seven men shot dead on April
Fools Day 1840, it was anything but advantageous.