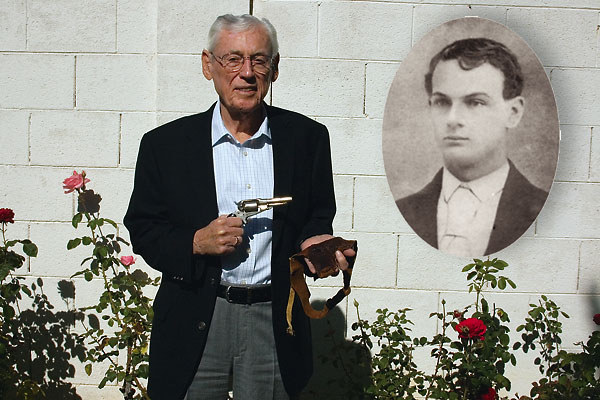 Growing up in Missouri in the 1930s, Wilbur Zink loved listening to family legends as he sat at the kitchen table.

The one that most impressed him was the story of his grandfather, David Crowder, who was a teenager when the Pinkertons killed John Younger in 1874. A shopkeeper’s son in Roscoe, Missouri, Crowder stood guard over the body. Guarding a dead man? Zink says that’s not as strange as it sounds, considering what often happened to the bodies of the infamous: “The custom in those days was to cut off an ear and pickle it, or show off a body at a Wild West show.”

Roscoe wasn’t far from Zink’s own home of Springfield, and that family tie inspired him to study what became his first book, The Roscoe Gun Battle. That research led him to seek out items owned by the Youngers and their partners in crime, Jesse and Frank James. Zink amassed thousands of items, which would ultimately inspire him to save the Younger homestead.

“The first thing I got was Jim Younger’s violin,” says Zink, from his Scottsdale, Arizona, home, where he and his wife have wintered for the last 28 years before returning to Springfield. As he notes, Jim ended up in prison, where he was visited by an old sweetheart who had gotten married and had a daughter. Jim gave the little girl his violin, the only thing he had to offer as a gift.

Zink knew none of that when he wrote to the daughter decades later. His interest in this elderly woman was really to find out about her late mother, who had written a historical novel about Missouri. He wondered if she had left behind any research that could be valuable to his own work. Unfortunately, she had not, but the inquiry led to a friendship, as Zink learned the woman was all alone, having survived a husband and a son who would have been Zink’s age. “She favored me,” he says, and their friendship led to a wonderful gift—she gave him Jim Younger’s violin, which he has to this day.

“I [then] bought Cole Younger’s spurs,” he remembers, selling them along the way. He owned Jesse James’ gun belt, bought from a collector who’d gotten it through a pallbearer at Jesse’s funeral. He owns Jesse’s gold tie pin, and he eventually bought the entire “James Family Collection” of 25 letters from Frank James to his wife Anna, written while he was in jail awaiting trial. Zink is turning that treasure trove into another book that will be named after a command Frank included in the letters: “Burn These Letters.” Zink calls that collection his “most exciting” find.

“I’ve spoken all over Missouri on the James family and the Youngers,” Zink says, estimating he has given more than 100 speeches to civic and religious gatherings on the history of their own backyards. Those lectures were given on top of his two day jobs; he was a Ford dealer for 50 years and a pastor for small Christian churches.

While he collected these pieces of history, he came across a building that he decided should be saved for history’s sake—the Younger homestead.

The homestead is a two-story, pre-Civil War home with a small front porch and four bedrooms upstairs. A simple house, it is constructed of wood with lapped shingles. Its lifetime not only included housing the Younger family, but also being transformed into an antique shop before sitting empty for several years. “Somebody poked a large hole on one end, and it was in bad shape,” Zink remembers.

The development of a new sub-division meant the old Homestead was scheduled for demolition. That’s when Zink and his collaborator, author Marley Brant, stepped in. She has also written about the Youngers and also wanted to see this piece of history saved from the bulldozer. She put up the money to buy the decrepit house, while Zink supervised the tearing down and cataloging of every board. Then he stored all the pieces of the house in his barn for two decades before he and Brant donated it all to the Cass County Historical Society, which plans to reconstruct it at a proper site someday.

Meanwhile, Zink has the equivalent of a museum in his own home. “We have an 11-room house in Springfield, but my wife doesn’t like having all this stuff around, so most of it is packed up in the basement,” Zink says. He is keeping good records of it all, writing notes for his son and daughter, detailing the items that they will inherit one day.

“I collected all this stuff to work on when I got old, and I’m there,” Zink says with a laugh. He still has the collecting bug. He’s working on a collection of letters from Jesse and Frank’s parents: Robert, who was a minister, and his wife Zerelda. Perhaps material for another book? Who knows? What he does know is that his collections mean something special. “It’s important to preserve history for our children or grandchildren, or it will be lost,” says Zink, sounding very much like an Old West Savior.