Puttin’ Up the Pantry 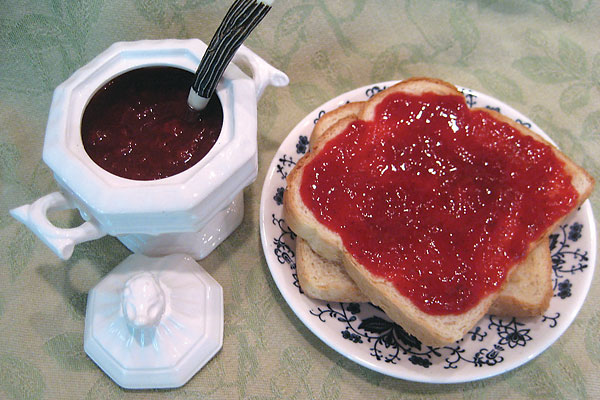 “I have just bought fifty-seven pounds of apples to make jelly for the winter; they were two and a half cents a pound,” wrote Mrs. E.M.H. of Lake County, California, in 1885.

“We had to stew the apples to a pulp, and then put them into clean flour-sacks to drain the juice out for jelly, and then rub the pulp through a sieve for jam. The jelly is lovely, and is a beautiful red colour, though the apples were quite green. And my hands are shocking! The apples have stained them black. It was a tiring day, for, excepting while I ate my meals, I never sat down from 7.30 A.M. to 7.30 P.M.”

As exhausting as that sounds, canning fruits and vegetables was commonplace to most women in the Victorian West. Many prided themselves on having the best stocked pantry of fruits and produce they either bought or harvested from their own trees and gardens. Some did both, depending upon where they lived and what they could grow or harvest locally. Either way, they worked hard all summer long to prepare for the winter.

“In the old days we didn’t run to the grocery every time we needed a loaf of bread, or phone to the grocer and have it delivered. We may have worked a little harder during the summer than women do today but it was well spent. I don’t think, however, we fully appreciated our own work until winter, when we opened the pantry door to gaze with pride at our well stocked shelves. Row after row of canned fruits, preserves, pickles, jams, and jellies. In the old days we were not like grasshoppers dancing in the summer and wondering what we were going to eat in the winter. We were more like the common garden ants who work in the summer to store up food for the winter,” mused May Bailey-Jackman, who grew up in Mesilla Valley, New Mexico, in the late 1800s.

“I have canned 22 quarts of tomatoes and made some catsup & have 1/2 bu [bushel] of ripe ones to can yet, and a bu [bushel] of green ones to pickle then I will be done mussing with tomatoes. I made 2 gallons of sweet pickles out of muskmelons. I am going to make some more out of pie melons,” penned Laura Oblinger, while homesteading in Fillmore County, Nebraska, on October 1, 1884.

Mrs. J.W. Britt, a resident of Amarillo, Texas, in the late 1800s, remembers gathering wild fruit: “Canyons and river breaks provided wild grapes and plums and a few wild currants for jellies, conserves, and pies. No, those days were not all hardships, far from it. One of the greatest pleasures enjoyed by friends and neighbors together was an occasional outing trip to the Palo Duro Canyon, during which they would remain for several days or weeks, reveling in the beauty of the scenery, gathering fruit, and indulging in the usual pleasures of the camp.”

Recalling her childhood in Portland, Oregon, in the 1870s, Miss Nettie Spencer noted, “We didn’t have any jars to put up preserves in, like they do now, but we used earthen crocks instead. The fruit to be preserved was boiled with brown sugar[.] [W]e never saw white sugar and when we did we used it as candy and then put [it] in the jars which were covered with cloth that was then coated with beeswax.”

Test your own canning skills by making the easy strawberry jam recipe shared above (it was my great grandmother’s recipe). If you opt out of the traditional canning method with glass jars, make a smaller batch and simply put some in containers to store in the fridge. The refrigeration method is for today’s busy cook’s schedule and meant to be eaten and not stored for long periods. My great grandmother used to freeze hers in small batches. Either way, enjoy!

Mash the strawberries in a stock pot; enough so the juice is released. Bring the strawberries to a boil and cook for 15 minutes, stirring often (use a long wooden spoon) so the berries won’t burn.

Add the sugar and boil for an additional two minutes. The jam will be done when you can run a finger mark through the back of a coated spoon.

Follow the directions on the canning jar box to sterilize. Once done, ladle the jam into the jars and seal. If you are storing the strawberry jam in the refrigerator, allow the jam to cool slightly. Then pour into containers and refrigerate.