Lonely Are The Brave 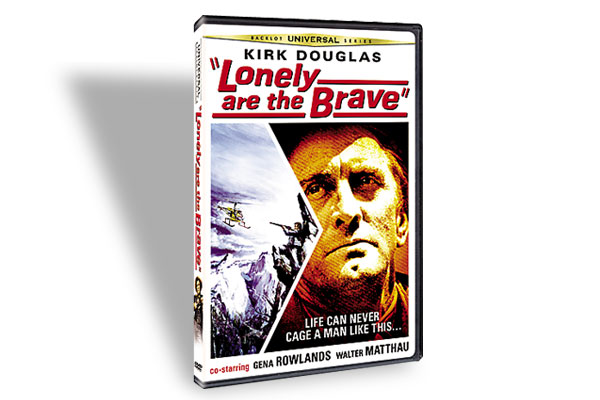 Jack Burns (Kirk Douglas) is the kind of cowboy that mamas are warned not to let their babies grow up to be. He has no respect for authority, and he treats his horse better that he treats himself (probably better than the women who have passed through his life). He moves from job to job, has no fixed address and sleeps outside, under the sky. When we first see him on the screen, lying on the ground, he could fit into any 19th-century saga were it not for the three jet streams crossing the New Mexican sky.

Lonely Are the Brave (1962), based on the novel Brave Cowboy by Edward Abbey, is as much a ballad as it is a movie, a sad song about a man who falls afoul of the law and is pursued far up a mountain by a passel of dull-witted cops and some overzealous chopper pilots. Commandeering the chase is Sheriff Morey Johnson (Walter Matthau), who sympathizes with Burns, as do we, especially when Burns refuses to leave his horse behind, even though it may cost him his freedom.

Meantime, Hinton (Carroll O’Connor), a trucker hauling a load of toilets, keeps appearing throughout the story as he travels west. Any smart film watcher will guess that Hinton and Burns have a date with destiny.

The picture has gained prestige over the years for a few reasons. Douglas named it his favorite movie role, even though it’s far from his best. Western Writers of America named it the 27th best Western in its 2008 poll, and Sam Shepard honored it in a snippet of dialogue in his play True West.

One central problem in the film is that Burns’s romanticized vision of himself seems adolescent at heart. Were it not for the ineptitude of his pursuers, his nobility would diminish by several notches. Drop Deputy Sheriff Walt Coogan (Coogan’s Bluff) into this film, and you’d see what I mean.

But this was the early 1960s, and anti-heroes, like Burns and Paul Newman’s Cool Hand Luke, were designed to take an epic amount of punishment on their way to glorious martyrdom. Watching Lonely Are the Brave, it’s no wonder that Douglas was so determined to play R.P. McMurphy in One Flew Over the Cuckoo’s Nest, a part he lost to Jack Nicholson. It would have been the capper in a career loaded with characters like Burns and Spartacus.

What also hurts the picture—spoiler ahead—is the ripe symbolism of a noble spirit struck down by a truckload of privies. How could a man who is able to negotiate tough mountains and impossible trails with his horse somehow find himself incapable of crossing a single two-lane road without getting hit?

Lonely Are the Brave features some wonderful acting, by Matthau, Douglas and Gena Rowlands, in a sweet, short part. The ending is powerful, even if a little silly. Finally, the film’s reputation, which is huge, has exceeded its actual worth.

The extras include a discussion of the film by Douglas and his son Michael, and director Steven Spielberg discussing formerly blacklisted screenwriter Dalton Trumbo’s contribution to the film.