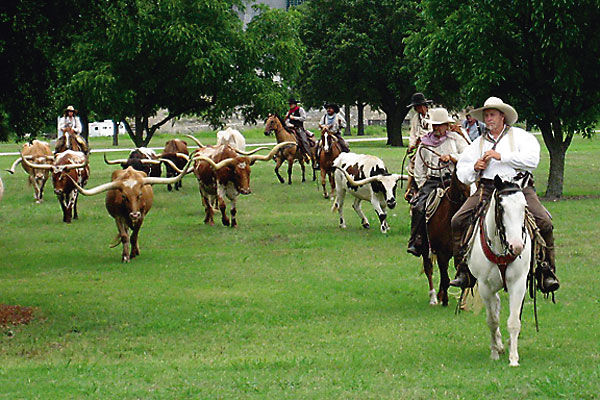 Local historian J.R. Edmonson does not hesitate when asked who everyone in Fort Worth knows.

“Steve Murrin, a third-generation cowboy whose weathered face is hidden behind a drooping gray moustache,” he replies. “He led the effort to revitalize the Fort Worth stockyards in the 1970s.”

As the northernmost Texas town on the Chisholm Trail, Fort Worth, established in 1849, benefited from the cattle drives following the Civil War. Murrin and other locals made sure the city’s cowtown days did not cease with the closure of the stockyards in the mid-1970s. Since 1999, locals and visitors have lined up Exchange Avenue to watch a herd of longhorns driven through the Fort Worth Stockyards. Given Edmonson’s favorite local hangouts, this city of 720,000 people will probably forever honor the historic era of the cattle drives.

What’s the latest gossip? Fort Worth’s 11-year project to create a riverwalk between downtown and the stockyards that will surpass San Antonio’s. But we still don’t have the Alamo.

Favorite Local Cuisine: If you’re talking “Cowtown,” you gotta be talking beef. For a damn good steak at an affordable price, I recommend the ribeye at Cattlemen’s in the stockyards.

Best Art Gallery of the West: Combine the art at Fort Worth’s Amon Carter and Sid Richardson museums, and you probably have the largest collection of Remington and Russell anywhere.

Best Bookstore of the West: Almost hidden in a small room at the rear of the Exchange Building, Books, Etc. sports a large collection of Western history volumes, including out-of-print treasures.

Best Spot to View Wildlife: The oldest zoo in Texas, the Fort Worth Zoo, houses more than 5,000 animals.

Best Time of Year: Spring is wetter, but those April showers cause the prairies to explode with colorful wildflowers.

Who knows Fort Worth’s history best? Dr. Richard Selcer, the author of several impressive volumes on Fort Worth history. Quentin McGown, who also has written about Fort Worth, has chaired many historical commissions in the city.

Popular Local Events: The Fort Worth Stock Show and Rodeo, in the middle of January and February, and the Red Steagall Cowboy Gathering, held the last weekend in October.

What historic site do most of the schoolchildren visit? Fort Worth Stockyards National Historic District, where they tour the area and museums and watch the daily cattle drive.

Special thanks to J.R. Edmonson, historian of the Alamo and the bowie knife, for sharing his love of the town with us.