Top 10 Things To See In Tucson 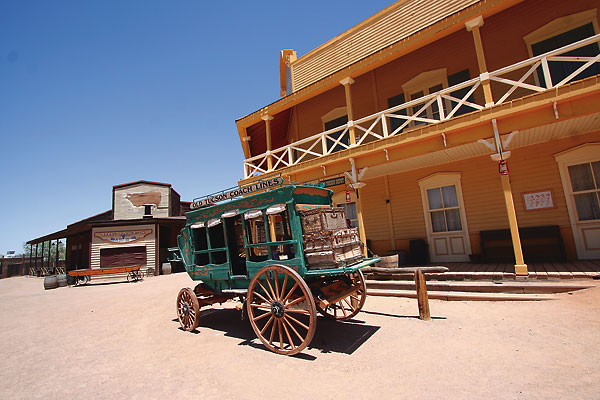 My continuing search for the True West has led me here: to Bobo’s Restaurant, listening to the staff join some customers in whistling the “Colonel Bogey March” – at 8 a.m., mind you!

I would remind them that The Bridge on the River Kwai wasn’t filmed in Tucson, so whistling “Gunfight at the O.K. Corral” (which was) is more appropriate, but my mouth is full of bacon, eggs and coffee, and I need nourishment.

That’s because the 10th most important thing you should do when visiting Tucson, Arizona, is eat a hearty breakfast. You’ll need it. Tourists haven’t discovered Bobo’s…yet.

On to the other nine:

9. Make Your Point: Picture the West, and you’re likely to see a giant saguaro. You’ll find few better spots to get up close (but not too close) to one of these towering cacti than in Tucson. Try Saguaro National Park, or the Arizona-Sonora Desert Museum or Tohono Chul Park.

7. Get Duded Up: Tons of guest ranches once populated the greater Tucson area, and a few remain, including popular places to hang your hat like Hacienda del Sol, Tanque Verde and White Stallion. Or if you just want to be pampered, head over to Westward Look Resort.

6. Cowboy Up: If dudes aren’t your deal, Tucson also offers the real thing, rodeo-style. La Fiesta de los Vaqueros (or the Tucson Rodeo) has been going on since 1925, bringing in hundreds of top PRCA competitors and thousands of fans. Dates for the 2010 event are February 20-28.

5. Train Yourself: In 1998, the city bought the Toole Avenue depot, completing restoration to its 1941 style in 2004. At this transportation museum, you’ll find a life-size bronze of two pleasant chaps waiting for the train. Those chaps happen to be Wyatt Earp and Doc Holliday, who gunned down Frank Stilwell on the depot on March 20, 1882.

4. Visit Hollywood: Speaking of Wyatt and Doc, I can’t think of a more powerful scene than when Burt Lancaster and Kirk Douglas rounded a corner on a Paramount back lot and found themselves at Old Tucson Studios. Gunfight at the O.K. Corral isn’t the only classic that took place here. It’s a must-stop for any Western movie buff. Time yourself so you can make the drive back to town over Gates Pass and take in those views of Tucson and Saguaro National Park.

3. Step Back in Time: The state’s oldest historical museum has branches scattered across the state, but I like Tucson’s best of all. It focuses on Southern Arizona’s Spanish Colonial and Territorial history with a wide range of exhibits, including one of Geronimo’s rifles. Here’s to hoping that state budget cuts don’t eliminate a state treasure like the Arizona Historical Society.

2. Go Dove Hunting: Just a short drive from town, Mission San Xavier del Bac, commonly called “White Dove of the Desert,” is equally awesome and inspiring. The church was built between 1783 and 1797. Colorful, charming and a bit mysterious, it’s everything a Spanish mission should be and more.

1. Save Room For Supper: El Charro, Maria Bonita, Mi Nidito or Crossroads Drive-In for your Mexican fix…Chad’s Steakhouse or Pinnacle Peak for red meat. You’ll definitely work up an appetite in this great Western burg.