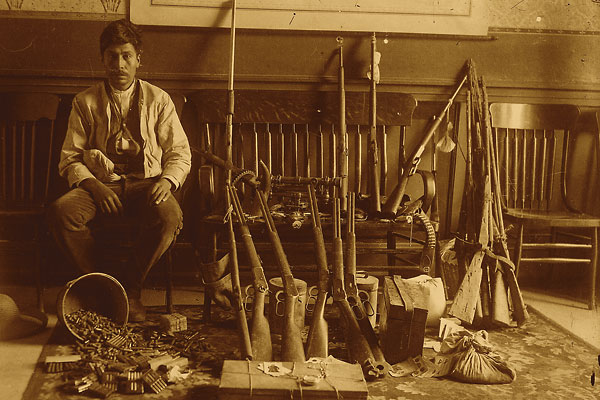 During Mexico’s Revolution of 1910, the rebel forces fought for their freedom with a vast variety of firearms that ran the gamut from blackpowder muzzleloaders and single-shot cartridge rifles to then modern lever-action and bolt-action repeaters-even machine guns.

Regardless of whether they served with Pancho Villa in the north, Emiliano Zapata in the south or any of a number of other guerrilla bands, these men, women and children were largely made up of vaqueros, farmers, city workers and rural peons, who utilized whatever weapons they could scrounge up. When one considers the various forces involved in this bloody revolt—the numerous bands of guerrilla fighters, the Mexican Federal commands of a string of presidentes, as well as the U.S. Army during the Punitive Expedition of 1916—it’s no wonder that such a wide array of arms were used during this period.

Backed by Diaz’s corrupt government, the Mexican Federal Army was well equipped by Germany, which showed great interest in Mexico at the time and armed the soldiers with mostly 7mm Model 1895 Mauser rifles. Later, the Carranza government also purchased German Maxim machine guns. Many machine guns eventually made their way to the revolucionarios, who relied almost entirely on captured or privately purchased arms.

Ammunition ranged from the smallest chamberings, such as .22 rimfires and .38 Short, to the most powerful military rounds of the era. Many guerrillas preferred American frontier-era rifle and revolver loads, like .38-40 and .44-40, along with the high-powered military smokeless rifle ammunition, such as .30-06 Springfield and .30-40 Krag. Even hunting rifle rounds saw use, including Winchester’s popular .38-56 Winchester (designed for the 1886 Winchester) and its Model 1894’s .30-30 WCF. Soldiers also did not turn away other old, but still deadly calibers, such as the all but obsolete blackpowder .45-70 Government load, which could be used in 1886 Winchesters and surplus 1873 Springfield “trapdoors.” With the exception of the .30-30 round, the revolutionists often had difficulty obtaining quantities of sporting ammo.

Generally speaking, virtually any arm produced up through the time of the revolt could have been used. Besides captured Mausers, the most popular arms of the mounted rebel vaqueros were weapons such as the slab-sided, lightweight and saddle-friendly 1873, 1892, 1894 and 1895 lever-action Winchester rifles and carabinas (carbines), undoubtedly with a number of Marlins and other lever guns of the day thrown in.

These revolucionarios had no official uniforms and no government to equip and pay them. All they had was their word of honor, the courage to fight for freedom from years of oppression, the clothes on their backs and the weapons and equipment they gathered through any means possible. They grew from a handful of vaqueros, working class townspeople and rural peasants to become a colorful, formidable and victorious fighting force that lived off the land, eluded its enemies with regularity and waged war to the cries of  “Viva Villa!,” “Viva Zapata” and “Viva la Revolución!”