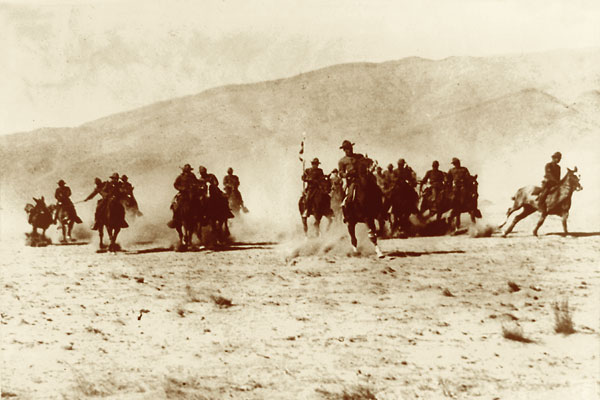 Patton positions two carloads—eight soldiers and a guide—at the southern wall around the hacienda and its two gates. He and the remaining two soldiers and a guide park their car northwest of the compound. They make their way east along the low north wall, heading toward the big arch of the main gate.

Patton carries a rifle in his left hand, with his right on the pistol butt at his hip. He is almost at the gate when three horsemen dash out of the hacienda into the courtyard and head southeast. They run right into the Americans stationed there.

The Mexicans immediately wheel around and charge toward Patton. Bullets whiz around the lieutenant as he pulls his Colt single action from its holster and returns fire.

One bullet breaks the left arm of the lead rider, who is later identified as Capt. Julio Cardenas, a close aide to Pancho Villa. Another shot takes down his horse. The wounded man scrambles for cover as Patton retreats to a wall to reload. The other two Mexican riders split up, trying to escape.

Patton sees one of them go by and shoots the horse in the hip, knocking down the mount and the soldier. In an act of chivalry, the American waits for the Mexican to extricate himself, stand up and pull his weapon—only then does Patton (and a couple of his men) shoot and kill him.

The third Villista has almost made good his escape, riding hard some 100 yards east of the hacienda. Patton holsters his pistol and aims his rifle. He and several of his command open up. The Mexican falls dead in the dust.

Meanwhile, in the confusion, Cardenas has exited on foot through the southwest gate and is running for some fields. One of Patton’s guides, an ex-Villista named E.L. Holmdahl, catches up with the wounded man, who falls to the ground and puts up his good, right arm in a sign of surrender. Holmdahl approaches with a drawn revolver to take the Mexican into custody. Cardenas drops his hand and pulls his pistol. His shot misses. Holmdahl puts a bullet in the captain’s head.

George S. Patton has had his first experience in combat, and he loves it.

General John “Black Jack” Pershing was looking for a few good officers to accompany him to Mexico in the spring of 1916. He had orders to get Pancho Villa, who had raided Columbus, New Mexico, on March 9, killing 18 Americans.

Black Jack liked the enthusiasm and drive of 31-year-old Second Lt. George S. Patton, who was itching for a fight. The general invited the officer along as an aide. (Okay, Pershing was also dating Patton’s younger sister Nita, which probably persuaded him.)

The Punitive Expedition headquartered in Dublán, about 100 miles south of Columbus. Pershing and Patton soon focused attention on Capt. (also referred to as Gen.) Julio Cardenas, head of Villa’s Dorados force of mounted bodyguards. His family had a hacienda at San Miguelito, about 150 miles south of Dublán.

Patton had previously checked out the place, looking for Cardenas. On one of those visits, he allegedly put Cardenas’s uncle to the “hanging torture”—stringing the old man up to make him talk. Patton got nada for his efforts.

On May 14, Patton went on a foraging mission near San Miguelito. He was accompanied by 10 soldiers and two civilian guides, split among three Dodge touring cars. No surprise—Patton decided to check out the ranch.

The man who would later earn the nickname “Old Blood and Guts” was about to test his intestinal fortitude and draw blood for the first time.

Patton and his men strapped the bodies onto the hoods of their cars. As they finished, 50 mounted Villistas approached, firing. Patton and company hightailed it north to headquarters.

The sight of the corpses, which had bloated in the hot sun, horrified Gen. Pershing. He ordered graves dug on the spot. A sergeant reportedly commented: “Ashes to ashes, dust to dust, / If Villa won’t bury you, Uncle Sam must.”

Nine days after the shoot-out, Patton, dubbed “Bandit” by his general, was promoted to first lieutenant. A year later, he was made a captain.

When asked why he intentionally shot the horses, Patton explained that Texas Ranger Dave Allison—whom he had befriended a few months earlier in El Paso—advised him to do just that if he got into a fight with cavalry.

The Cardenas shoot-out garnered international headlines; the ego-driven Patton loved that papers dubbed him the “Bandit Killer.” It paved the way for him to accompany Pershing to Europe the next year in World War I.

Pershing and Nita Patton were briefly engaged, but the relationship fell apart at the end of World War I.

Patton made his mark in World War II, as a general in North Africa, Sicily and Europe.

Recommended: Patton: A Genius for War by Carlo D’Este, published by Harper Collins.