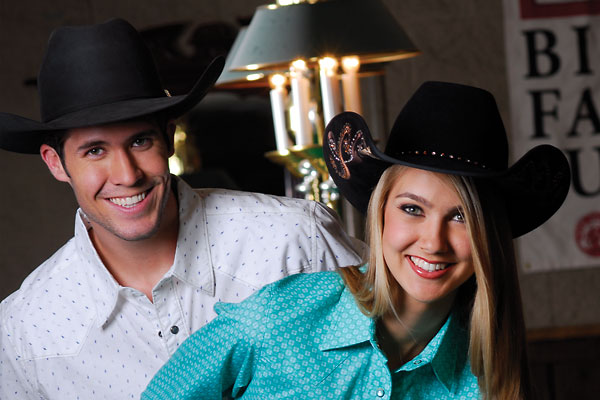 In 1918, Philip Miller got off the train at Denver’s Union Station with a sample case of Miller Brothers cowboy hats, most of his worldly possessions and a persistent cough. When he arrived, the American West was still largely wild and sparsely populated, but the former gold-mining camp was already a teeming metropolis with nearly 250,000 people. Denver buried the Old West, along with Buffalo Bill on nearby Lookout Mountain, the year before, and commerce was the new frontier. Little did this sickly hat drummer know he would help define the New West and launch an industry.

Miller, in his late 20s, had been dispatched to Denver from New York City by his hat-making brothers. His job was to open new sales territories for the family business. Denver was chosen as his base not so much for its bustling economy but for its dry mountain air. They hoped it would help ease his fight with tuberculosis. A family member would later say that he went to Denver to die, but didn’t get around to it until he was in his 80s.

Miller thrived in his new location, and he launched his own business: Miller Hat Co. Traveling extensively throughout the Rocky Mountain and Great Plains states, he called on small town mercantiles and remote ranches to sell cowboy hats. The farmers and cowboys he dealt with were having trouble getting boots, clothes, saddles and other necessities for life in the West. Seeing an opportunity, Miller started the Stockman-Farmer Supply Co. and published his first catalog in 1923. He soon amended his company’s name to Miller Stockman Supply Co. and expanded the scope of his business. By the mid-1930s, he was manufacturing clothes for ranchers and cowboys as Miller Western Wear.

Fast forward to the 1980s. Philip Miller had retired in 1962, and the company he founded was a full-blown conglomerate called Miller International Inc. The company included the original Miller Stockman catalog division, 30 Miller Stockman retail stores, Miller Western Wear shirt manufacturing and Rocky Mountain brand jeans for women. “Rockies” were not the standard Western five-pocket, boot cut denim jeans. They offered a flattering fit and unique styling that quickly became the company’s best-selling product. In 1992, Miller Western Wear was renamed the Rocky Mountain Clothing Co., and the last shirt with Miller’s name on the label was produced.

Rocky Mountain Clothing Co. introduced mainstream Cinch jeans and shirts for men in 1996. Aside from the evocative name and its availability from Western stores and catalogs, there was nothing intrinsically Western about the line. Two years later, Cruel Girl debuted as a female version of Cinch.

In 1999, 76 years after Philip Miller published his first catalog, Miller Int’l sold off the catalog and the retail stores as the company focused on its manufacturing and design business. Despite the fact that the last Miller Stockman catalog was mailed to more than three million customers, Philip Miller’s name all but disappeared from the Western market.

Rocky Mountain Clothing Co. returned to its Western roots with the launch of Southern Thread in 2004. The shirts and jeans were designed and marketed to appeal to young male fans of Red Dirt music—the alternative Country music inflected with Woody Guthrie’s folk sensibilities and Waylon Jennings and Willie Nelson’s outlaw attitudes.

This year, Rocky Mountain Clothing Co. has revived the Miller name with a collection of classically styled, high-end men’s Western shirts and outerwear called Miller Ranch. The line and the brand were conceived as an upscale tribute to both the Miller legacy and life on the ranch.

The genesis of the line started two years ago when Rocky Mountain executives began collecting Miller Stockman catalogs and Miller Western shirts. Their original intention was to augment the company archives, which were found to be wanting whenever some company history needed to be researched. “Some of us started collecting stuff so we could have a little history room here,” recalls Keith Mundee, vice president for marketing and sales.

As they collected old Miller memorabilia, they began thinking about the legacy of the company and its role in fostering the Western lifestyle. They looked at the Western shirt category and noticed a gap in the upper end for high-quality shirts with traditional Western styling. One problem they faced immediately was the name. The rights to “Miller Stockman” and “Miller Western Wear” were sold along with the stores and catalogs in 1999.

They came up with Miller Ranch and decided to produce a limited, high-quality collection, Mundee says. “We felt this was a segment of the market that was underserved and that’s typically what we do here. We look for gaps and try to fill those gaps. With Miller Ranch, we wanted to carry on the legacy of the Miller name.”

Veteran Western apparel designer Mary Eppolitos was the lead designer of the Miller Ranch collection. “A lot of her inspiration and a lot of her direction came from our CEO David Dean, along with Bobby Smith [vice president of Western brands],” Mundee says. “What we wanted to do was build a very fine men’s shirt, done tastefully. Something that we thought wasn’t already out there. It’s about the history of the West, without being Howdy Doody.”

The new collection may revive the venerable Miller name, but it is not based on any past Miller Western Wear product. “Miller was more of a price-driven, commodity type of product,” Smith explains. “Miller Ranch is a premium brand that’s being targeted to a premium customer.”

That premium customer includes anyone who appreciates and is willing to pay for well-made clothing. He is a man whose tastes run to timeless styling with luxurious touches. He may or may not ride horses or own cattle, but he aspires to the Western lifestyle. He may even normally wear conventional dress shirts for work, but dresses Western after hours and on weekends because he likes the fit and look. Miller Ranch gives him the option of wearing finely woven Western shirts that are appropriate in the boardroom, a favorite restaurant or out at the ranch.

The 2009 Fall line also includes a plaid 18-ounce wool vest and a handsome wool coat loaded with convenient pockets, snap-closure side vents and the technical wherewithal to withstand a cold Norther in the saddle.

An interesting aspect of the Miller Ranch collection is that its logo uses the letters M and R in a way that suggests a cattleman’s brand, but also mountains and a river. The logo is used extensively on the packaging and on the shirt. “All the snaps and buttons are laser-engraved with the Miller Ranch logo,” Mundee notes. “The Miller Ranch logo is done subtly on each shirt in tonal embroidery.”

The Miller Ranch collection starts at $75 suggested retail and is available at RockyMountainClothing.com and high-end stores.

Philip Miller would be proud to see his name is again being stitched onto shirts in the 21st century.