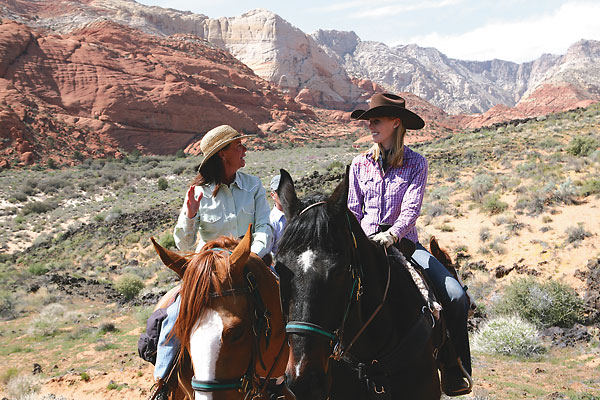 When Brigham Young called upon the 300-plus families to help with the Cotton Mission, they did not go happily. “I have seen faces look as long as a sectarian parson’s face,” reported church leader George A. Smith. But Young hoped their efforts would help alleviate the cotton shortage back East due to the Civil War. In October 1861, the Mormons founded a city north of the junction at the Santa Clara and Virgin Rivers, which they named St. George after their leader.

Erastus Snow led the charge for the Cotton Mission from his base in St. George, and the park’s name was changed from Dixie State Park to Snow Canyon State Park in honor of him.

The park sometimes gets missed for the grander Bryce Canyon, Capitol Reef and Zion National Parks, but it’s worth the trip because of its striking scenery and because of outfitter Patty Arnett’s Olympic trail horses.

As I rode out from our meeting point on Itos, an 18-year-old dark bay Dutch Warmblood, I could feel that I was on a special horse. Itos, the father of all of the horses that our small group was riding, placed eighth in the 1996 Atlanta Olympics. He’s one of Patty’s well-bred horses that visiting riders can mount if they explore the park with Patty.

We rode by towering white and red Navajo sandstone canyons, juxtaposed with dark lava rocks, which attracted Paiute and Anasazi Indians, Mormon settlers and Hollywood filmmakers. It also attracts distinctive wildlife, like the Peregrine Falcon, leopard lizards, gopher snakes and the giant desert hairy scorpion, said to be the largest scorpion in North America. Upon learning of that fact, I was glad that I wouldn’t be camping out in the park.

As we rode along a rocky portion of the trail, Patty told me that we were passing over an area where lava once flowed 2.5 million years ago. All around us were desert plants and wildflowers. The neat thing about riding in Snow Canyon is that as the sun moves across the sky, it illuminates different aspects of the canyon walls; the scenery constantly changes as new colors are brought to life.

All along the ride, Patty and I used our imagination to see what we could find within the sandstone walls. We spotted rock formations that looked like bears, the gopher from Caddy Shack and an eagle head. We must have had wildlife on the brain, as we approached an area with falcon nests in the crux of a rock wall. For bird watchers, this is a highlight of the ride.

What’s most interesting about riding through Snow Canyon is its geological diversity. I suppose this is why it would be a good place to film a show like mine, and Hollywood movies of the past. The Electric Horseman, Butch Cassidy and the Sundance Kid, and Jeremiah Johnson are some of the famous Westerns that filmed scenes in Snow Canyon. As someone who does a lot of filming on horseback, I could imagine the drama as Paul Newman and Robert Redford navigated through the sand at Snow Canyon in the beginning of the chase scene in Butch Cassidy, when their characters Butch and Cassidy keep looking back to ask, “Who are those guys?”

As we continued our trek, the rocky footing changed abruptly to fine, deep sand trails. “Yeah, we call this the Utah Beach. Instead of having ocean, we have a sea of sage,” Patty jokes. Unlike the beach, I was enjoying the fact that the park wasn’t crowded. We hadn’t seen any other riders on the trail that day or any other people at all. Perhaps it wasn’t so bad that everyone was flocking to Bryce and Zion, leaving the small, but satisfying Snow Canyon all to us. We rode through a sandy wash and were lucky enough to see a beautiful white flower blooming in the crux of the rock wall. I find it amazing that such delicate things like the roots of a small flower can take hold and thrive in such harsh environments. This is the power of nature.

We climbed up to a high spot to enjoy views of the north end of the park with its pink and white canyons in the distance. As we rested there, I thought about the Mormons who unhappily headed to their mission. If only they could have seen the beauty that is Utah’s Dixie today.